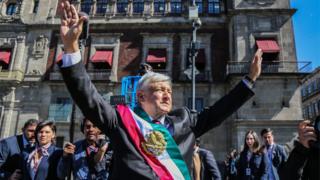 Andrés Manuel López Obrador – Mexico’s first leftist president in seven decades – has been sworn in at a ceremony in the country’s parliament.

The former Mexico City mayor pledged on Saturday to end corruption and impunity to transform the nation on behalf of the poor and marginalised.

The 65-year-old, popularly known by his initials Amlo, won a landslide victory in July – his third presidential bid.

The political veteran begins his six-year term with approval ratings of 56%.

His predecessor Enrique Peña Nieto leaves office with only 24% – his administration was plagued with corruption scandals and crime-related murder rates reaching record-high levels.

President López Obrador inherits an immediate foreign policy issue – what to do about the thousands of Central American migrants camping on the US-Mexico border.

What did Amlo say?

“We will carry out a peaceful and orderly but also deep and radical transformation,” the silver-haired leader said in his first speech to Congress. “Because we will put an end to the corruption and impunity that are blocking Mexico’s rebirth.”

Mr López Obrador reiterated many of the populist pledges he made during his campaign, tackling crime, poverty and corruption.

He intends to rule frugally – selling Mexico’s presidential plane, not living in the presidential palace, and by cutting his own salary by 60%.

Mexico has privatised almost every part of its economy over the past three decades and Amlo vowed to reverse what he called disastrous neo-liberal economic policies of his predecessors.

He promised that he would “never seek re-election” and more surprisingly, announced his intention to promote a recall referendum during his administration, allowing voters to remove an elected official through a direct vote.

To chants of “Presidente” and “Yes we could!” inside the chamber, Andres Manuel López Obrador received the presidential sash from the outgoing President Enrique Peña Nieto.

It certainly won’t be easy given the extent to which such problems are endemic in the country’s politics and society.

However, the new presidential approach was clear from the moment Amlo left his home to attend the ceremony. He travelled in the same aging Volkswagen he has driven for years while Mr Peña Nieto was in the usual armoured convoy.

Crowds also flocked to watch the ceremony at the official residence of Los Pinos, which President López Obrador has refused to live in and has instead turned into a public museum.

His thousands of supporters have gathered in the main square in Mexico City to celebrate a moment many thought would never come: the one-time political outsider now crowned as the new hope for change in Mexico.

President López Obrador has signed an agreement with three Central American counterparts to create a plan to stem the flow of migrants seeking asylum in the US, the Associated Press reported.

Mexico’s foreign ministry said the plan included a fund to generate jobs in the region.

In the Mexican border city of Tijuana, more than 6,000 migrants from Honduras, Guatemala and El Salvador face months of waiting for their asylum claims to be processed.

They say they are fleeing persecution, poverty and violence in their home countries and have travelled more than 4,000km (2,500 miles) for a chance at the American Dream. 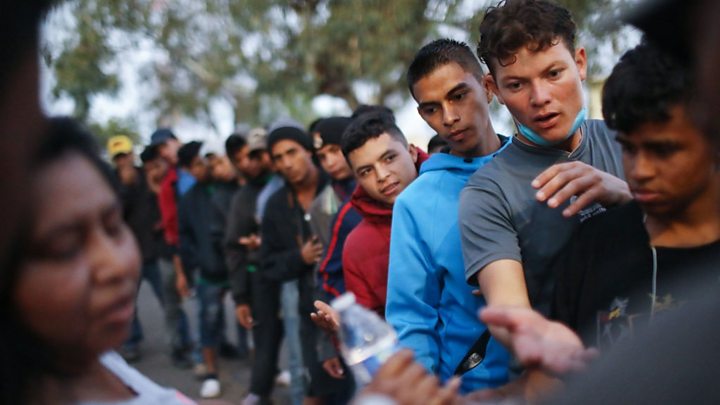 We will use your email address only for sending you newsletters. Please see our Privacy Notice for details of your data protection rights. Another royal…

We will use your email address only for sending you newsletters. Please see our Privacy Notice for details of your data protection rights. Scientists said…