Third corruption charge levelled at the outgoing president, who on January 1 will be succeeded by Jair Bolsonaro. 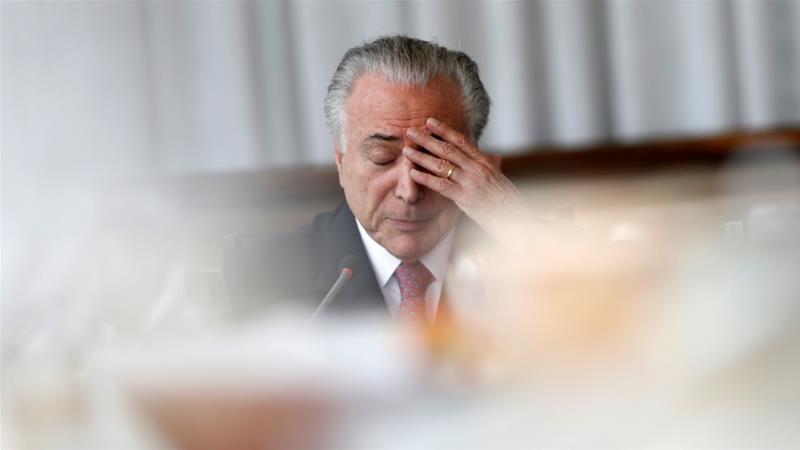 Brazil’s Prosecutor General Raquel Dodge has charged President Michel Temer with corruption and money laundering uncovered in an investigation into a fraud related to port concessions, according to a statement from her office.

It is the third corruption charge levelled at the outgoing president, who on January 1 will be succeeded by Jair Bolsonaro, a far-right politician promising an anti-corruption crusade. Bolsonaro won the October elections, in which Temer did not run.

The prosecutor said in a statement on Wednesday that Temer and five other people were suspected of implication in the bribery accusation, which involved four port companies making 32 million reais ($8m) in the alleged illegal payments.

Temer was also suspected of money laundering in the case.

The outgoing president escaped action over the previous two corruption allegations against him when the National Congress of Brazil voted to dismiss them.

However, the latest accusation is more problematic for him as the Congress will not have enough time to evaluate the charge before Bolsonaro’s mandate starts.

The president’s office said in a statement that he will prove that there were no irregularities and that no company illicitly benefited.

He is immune from prosecution while in office, unless the Supreme Court decides to strip his immunity.