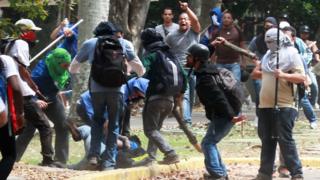 In this yet-to-be-finished building in a suburb of Caracas, Hugo Chávez is very much alive. A statue of Venezuela’s late president, dressed in military uniform, stands prominently at a corner of the main room as if welcoming everyone who enters.

Glued to the decaying wall, a picture of him smiling, printed on the yellow, blue and red colours of the national flag, looks over the table where Subero and his men spend hours in meetings.

Subero’s decades-old links to Chávez go far beyond ideology. The 47-year-old retired sergeant fought in the attempt Chávez led on 4 February 1992 to overthrow then-President Carlos Andrés Pérez. The movement failed, and Subero, Chávez and others spent some of the following years in jail.

Subero’s loyalty to his leader, however, was left unshaken.

He now leads one of the dozens of groups called colectivos, or collectives, which see themselves as the defenders of Chávez’s Bolivarian revolution and vow to defend his successor, President Nicolás Maduro, as he faces his biggest challenge yet.

The embattled leader has resisted mounting pressure to step down and call early elections while Juan Guaidó, head of the opposition-controlled National Assembly, gathers international recognition after declaring himself interim president.

But Subero and many others in his colectivo, by no coincidence called 4 de Febrero, seem ready to stand up for Mr Maduro, who has been in power since 2013.

“I’m willing to fight until my death,” says Subero.

The colectivos emerged during Chávez’s years and, with government backing, spread across communities as social organisations supporting the implementation of official aid programmes. They are believed to have a few thousand members all around the country.

But some have been accused by the opposition and human rights groups of acting as paramilitary groups, often using force to impose their control over neighbourhoods and attack government critics, protestors and journalists.

As discontent with Mr Maduro grows, fuelled by an economy in freefall and widespread shortages of food and medicine, some fear things could turn even more violent with the armed colectivos, working alongside security forces loyal to the president, playing a key role in the streets.

At least 40 people were killed across the country in a week alone last month, according to the United Nations, with pro-government forces blamed for most of the deaths.

For Subero, a father of three who did not want to give his real name, the crisis here is “being induced by foreign powers”, a claim often made by Mr Maduro and his allies, and an invasion is being planned, a fear consistently fanned by the government though it has never happened.

“I’m ready and willing to go to war,” he said, surrounded also by religious sculptures and placards with the face of another local hero, 19th Century independence leader Simón Bolívar, who Chávez claimed to be his “revolutionary” inspiration.

In a dimly lit room next door, the old television, as usual, was tuned to Venezuela’s state broadcaster, which devotes much of its time to the latest about Mr Maduro and his government.

As Jorge Navas watched it, Diosdado Cabello, a key Chavista, was passionately warning thousands of supporters of a possible international operation in the country.

“We’re a militia and when the moment arrives, we’ll take up arms,” Mr Navas said, despite most colectivo members usually denying having any involvement in armed violence. 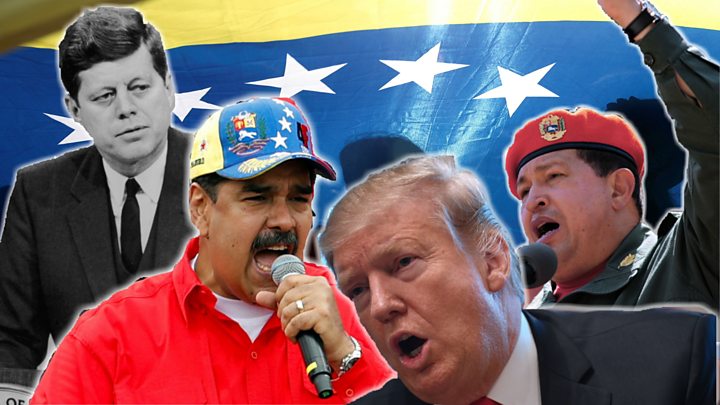 Earlier this week, Mr Maduro said he could not rule out the possibility of civil war as a result of the impasse, and warned US President Donald Trump, whose government is backing Mr Guaidó, that he risked a repeat of the Vietnam War if he intervened.

From 1965 to 1973, hundreds of thousands of US soldiers were sent to help fight communist forces in a costly and unsuccessful war which brought domestic civil unrest and international embarrassment.

Mr Guaidó has rubbished the threat of a civil war in Venezuela as an “invention”.

Sombra, also not his real name and Spanish for “shadow”, is a member of a different colectivo, Guerra a Muerte, its name taken from the Decree of War to the Death issued by Bolívar in 1813 during Venezuela’s war for independence.

For him, the problems his “beautiful nation” has faced are a result of its people not recognising “the huge legacy left by the eternal commander”, meaning Chávez.

Sombra, who also works as a security guard, said Mr Maduro was the legitimate president – despite his re-election last year being disputed by many inside and outside the country – and that the efforts by the opposition to oust him constituted a coup.

“We want things to be resolved through dialogue,” he said. “[But] I’d give my life to the revolution, of course.”

BRITAIN is set to bask in highs of 24C this weekend following days of wet and windy weather from Storm Edouard. Temperatures will reach mid…