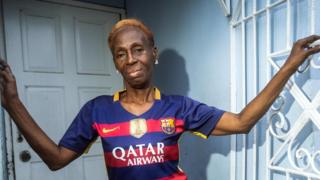 Every morning, Pauline Perez walks past the bullet-ridden Denham Town police station to commute to work as a government clerk in West Kingston, Jamaica.

For the past year, she has passed by dozens of soldiers and police brandishing M-16s who now block every road to her community.

The government has selected the Denham Town neighbourhood for a crime-fighting plan called Zones of Special Operations (Zoso).

The plan uses a heavy military presence to attempt to address the island’s spiralling murder rate, now the sixth highest in the world according to a 2017 report by the Small Arms Survey.

When Denham Town was first declared a Zoso last October, armed soldiers and police descended upon the community. They imposed curfews, searched residents, and detained suspects.

It was supposed to last only 60 days. But last month, just shy of the project’s first anniversary, Prime Minister Andrew Holness announced an extension until at least January 2019.

When it was first introduced, critics such as Human Rights Watch warned that the crime-fighting plan was “ripe for abuse”, pointing to the Jamaican police force’s reputation for brutality and corruption.

But there have been few complaints from residents, in fact, many say they never want the joint forces to leave.

Living in the midst of gang warfare, residents like Ms Perez argue that they are happy to trade a few civil liberties for temporary security.

“It’s the first I’ve slept without [hearing] gunshots in years,” she says. “But I’m not sure it’s a long-term fix.”

For the past few years, Ms Perez has been working as a “violence interrupter” with an NGO called Peace Management Initiative, a role in which she counsels youths and gunmen on how to renounce violence.

She feels many youths want to get out of violence but are not always sure how. She and her colleagues are hopeful about brokering a ceasefire between rival gang factions.

She says that the residents of Denham Town have learned to rely on themselves but that the Zoso has given them some peace and quiet to allow the talks to proceed.

Many locals say that before the arrival of the troops, they felt neglected by the police, abandoned by the state and left at the mercy of the powerful criminal gangs which serve as de-facto governments in many inner-city communities.

Earl is one of these residents. “Anything could go before,” he says as he works with a group of men shovelling mulch from a hopelessly blocked drain. The work is part of the crime-fighting plan which also attempts to improve conditions in the neighbourhood.

Earl says that this clean-up could not have happened before because of the violence. “It doesn’t matter that we’re in front of the police station, gunmen would still shoot you. The police can’t do anything about it.” Earl says they would have had to hire guards as lookouts.

While the main opposition People’s National Party has called it a publicity stunt and not viable as a long-term solution, its lawmakers have repeatedly approved the plan’s extension in parliament.

Last month, Prime Minister Holness announced that 20 more Zoso would be rolled out throughout the island.

Jamaica is not the first country to use soldiers to police its streets, Brazil, Mexico and the Philippines have all done so before.

What is striking is how well the move has been received on the Caribbean island. A recent survey found that more than half of Jamaicans would even go as far as accepting military rule in order to rein in the country’s high crime levels.

Some academics put the warm welcome given to the military down to the failures of Jamaica’s police force, which has in the past struggled in areas like Denham Town.

The government chose Denham Town for the Zoso after an explosion of gang violence in the area. It is an intricate maze of zinc fences and unpaved roads that criminals know intimately and police officers often struggle to navigate.

The drug don who ran Denham Town was Christopher “Dudus” Coke. He was extradited to the US on drug charges eight years ago, and it has been chaos ever since as gangs fight for power in the vacuum he left behind.

In this 10 block by 10 block space, 18 people were murdered last year. Since the Zoso was introduced, that number has dropped to 10. Residents say that number is still unbearably high but welcome the fact that shootings have dropped by 70%.

Since the crime-fighting plan was introduced, it has been eerily quiet in Denham Town, where 40% of youths are unemployed. The rum bars that usually blast dancehall music and the street corners that are normally filled with young people are now silent and empty.

The security forces believe they are beginning to mend what was a broken relationship with the community. “What we are trying to do here is build trust,” says Jamaican army spokesman Major Basil Jarrett.

He says that officers from the joint police and army force are receiving training in human rights before they enter the areas. They have also held several events such a marathon so that members of the security forces and residents can interact.

To the west of Denham Town is Trenchtown, the birthplace of Jamaican singing legend Bob Marley and reggae. To the south is the waterfront of downtown Kingston which the current administration has been pushing to develop.

“They [are] not going to make the war here stop their plan for downtown Kingston,” says Ms Perez of the government’s new-found interest in driving down crime in Denham Town.

During the past year, the long struggling Jamaican economy has been growing, the poverty rate has gone down and debt has fallen but this prosperity has not reached Denham Town.

Many residents fear that the gunmen who used to rule this neighbourhood have only been temporarily displaced and are biding their time only to return once the joint forces leave.

“The politicians don’t live down here, and when they come it’s with bodyguards,” says Ms Perez. “It’s up to the residents to stop the violence now.”