A fall in Treasury yields is providing support to the precious metal as investors await minutes from the Federal Reserve’s June meeting for more clues on its policy outlook.

The dollar index is in a quiet mode ahead of the release of Fed minutes. Any hawkish shift would be supportive for the greenback, while dovish tone from the Federal Reserve would be dollar-negative.

Former Republican Congressman Debunks A Modern Myth About The GOP

Former Rep. David Jolly (R-Fla.) on Tuesday roundly rejected the idea that there’s currently “a fight for the soul of the party” between moderate Republicans and sycophants of ex-President Donald Trump.

“There is nothing left of this Republican Party other than a party that’s able to embrace and to elevate an undemocratic, anti-republic theme that somehow we can engage in a fraud on the American people as long as it supports our guy winning an election,” Jolly told MSNBC’s Nicolle Wallace during a discussion about GOP support of Trump’s election lies.

“Every election is so important but it does make the next presidential election so important because is that part of the Republican platform?” he asked. “And do we now live in a two-party America where only one supports a true democratic republic or not?”

Jolly, who left the Republican Party in 2018, said America was now “a long ways” from being a multi-party democracy. And the GOP that celebrates Trump would continue to be “anti-republican, anti-democratic” until “someone wrests control of the party from the former president,” he added.

Oil prices were moving higher on Wednesday as the oil market faces tight supplies in the second half amid uncertainty about OPEC+ production policy.

Benchmark Brent crude futures jumped 1.7 percent to $75.77 a barrel, after plunging over 3 percent in the previous session. U.S. West Texas Intermediate crude futures were up 1.8 percent at $74.67.

Without any additional hike in output as earlier assumed, the supply uncertainty is driving oil prices higher.

Oil producers abandoned talks on Monday after three days of negotiations failed to close divisions between Saudi Arabia and the United Arab Emirates over output hike.

The United Arab Emirates agreed to go along with output increases but rejected a separate proposal to extend curbs to end-2022.

If a quick resolution is not found, there will be increased uncertainty in the months ahead, analysts said.

The American Petroleum Institute will release its weekly estimates of crude inventories after the closing bell later today. Analysts expect stocks to fall by 3.9 million barrels.

The weekly oil report from the U.S. Energy Information Administration (EIA) will be released on Thursday.

The National Audit Office tells Ian King about their investigation into Greensill Capital and the collapsed lender, we speak to Heathrow’s Chief Executive John Holland Kaye about a trial of new fast track lanes for fully vaccinated arrivals, and the rapper Tinie Tempah explains why he’s investing in a web browser

Giannis Antetokounmpo came back from injury, but the Suns beat the Bucks, 118-105. 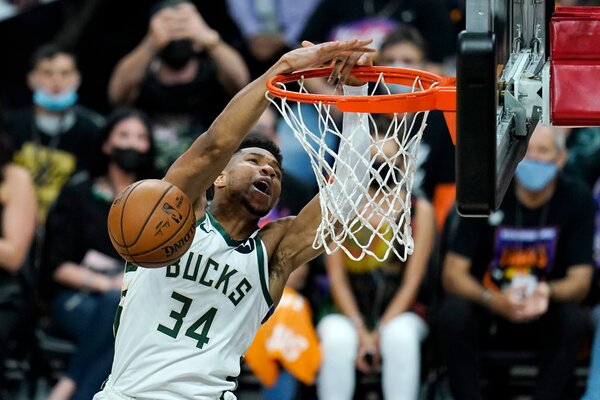 PHOENIX — Giannis Antetokounmpo writhed on the court, eyes clenched, dreams ostensibly dashed in Game 4 of the Eastern Conference finals against the Atlanta Hawks.

DUBAI (Reuters) – Omani government bonds rose on Wednesday on news the Gulf country had asked the International Monetary Fund for technical assistance to help it develop a medium-term debt strategy and bolster its fiscal structure.

Jazz Pharmaceuticals plc (JAZZ) said that the Health Canada has approved Vyxeos -daunorubicin and cytarabine liposome for injection- for the treatment of adults with newly diagnosed therapy-related AML (t-AML) or AML with myelodysplasia-related changes or AML-MRC.

The approval was based on results from a Phase 3 study of 309 adult patients, aged 60-75, with newly diagnosed t-AML or AML-MRC.

AML, a cancer of the bone marrow and the blood, progresses rapidly without treatment. Specifically, high-risk AML includes t-AML and AML-MRC. T-AML is caused by previous therapeutic treatments while AML-MRC occurs when there are certain changes in the bone marrow, which is the spongy tissue inside the bones.