Israel’s two largest banks are headed to the United Arab Emirates this month to explore opportunities for cooperation now that the countries have started normalizing ties.

A delegation from Israel’s Bank Hapoalim Ltd., led by Chief Executive Officer Dov Kotler, will travel to the UAE on Tuesday to meet with banking and finance executives, as well as senior economic officials, the lender said Sunday in a statement.

A Bank Leumi le-Israel Ltd. team of 20 senior executives, led by Chairman Samer Haj Yehia and CEO Hanan Friedman, is scheduled to visit the UAE on Sept. 14, and plans to sign cooperation agreements with leading Emirati banks while there, the Israeli lender said.

The normalization process announced last month is the first between Israel and a Gulf Arab state.

Israel has concluded it can’t block the sale of American-made F-35 stealth fighters to the United Arab Emirates, and will ask theWhite House for other weapons so it can maintain its regional military superiority, Yedioth Ahronothreported, without saying where it got the information.

Officials may seek to purchase other advanced weaponry or move forward planned arms purchases by a year, the newspaper said.

One Chart Shows Who Is Turning Away From Gold 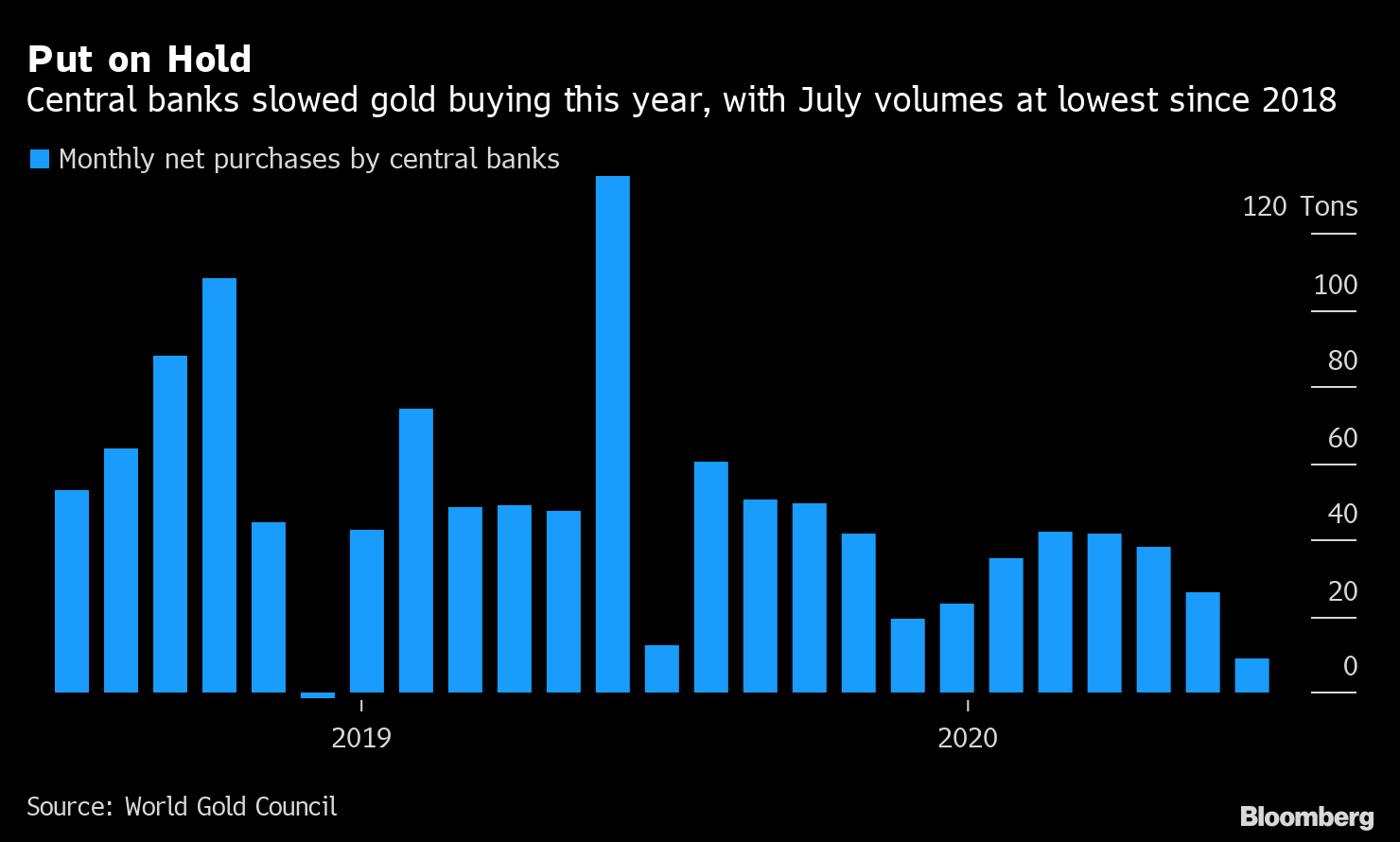 Central banks’ net purchases of goldfell below 9 tons in July, the lowest since 2018, World Gold Council data show. After two years of big buying, demand has eased in 2020 as some nationscurbed purchases, prices hit a record and the coronavirus crises rippled through the economy. While the council expects bullion reserves to keep rising, the slower pace would curtail an important driver of gold’s advance in recent years.

The Russian coronavirus crisis centre said 61 deaths had been confirmed in the past 24 hours, bringing the official death toll to 17,820.

The South Korean government plans to ask parliament for about 7.5 trillion won ($6.3 billion) this week, in what will be its fourth extra budget this year as it battles a resurgence of the coronavirus.

While South Koreaoffered cash handouts to all households in May, the new funds will be used for aid to the more vulnerable sectors of society including low-income workers and some self-employed people, a ruling party spokesman said after a meeting Sunday between his Democratic Party head, Lee Nak-yon, Prime Minister Chung Sye-kyun and Finance Minister Hong Nam-ki.

The extra budget, the smallest of the extra allocations this year, has to be funded through government bond sales.

South Korea last allocated four extra budgets in 1961, which shows how desperate the current situation is, Lee said at the meeting.

The secretive, military-run space program has released few details of the craft, which was launched Friday aboard a Long March 2F rocket from the Jiuquan Satellite Launch Center in China’s desert northwest.

The craft landed as planned at Jiuquan, the official Xinhua News Agency said.

State media have yet to publish any photos. The craft’s size and shape are unclear.

The flight “marks an important breakthrough in our country’s research on reusable spacecraft” that promise a “more convenient and inexpensive way” to reach space, Xinhua said.

China fired its first astronaut into orbit in 2003 and has launched a space station. Last year, it became the first country to land a robot rover on the moon’s little-seen far side. A probe carrying another robot rover is en route to Mars.

The United States and the former Soviet Union both flew reusable spacecraft.

The Soviet space plane, Buran, orbited the Earth twice during its single uncrewed flight in 1988.