It was a little past midnight on Friday, and Israel’s Supreme Command Post was racing to complete as many strikes as possible in the final hours before a cease-fire with the Palestinian militant group Hamas was to take effect at 2 a.m.

On a wall covered with huge screens, a three-dimensional diagram of a high-rise building with one of its apartments marked in red popped up. On another screen, a live video from the air circled above a building in Gaza that looked a lot like the one in the diagram.

This room is the nerve center of a bunker dubbed the “Fortress of Zion,” a new Israeli Army command post deep underground beneath its headquarters in the heart of Tel Aviv. It is designed to command the kind of high-tech air wars that have supplanted ground invasions fought by tanks and infantry battalions.

The latest conflict with the Palestinians was the first time the sprawling facility was used during wartime. It was also the first time the army allowed foreign journalists inside one of the most fortified and secretive installations in the country — an effort to showcase Israel’s military and technological prowess but also to counter criticism over civilian casualties.

From the bunker, the military oversaw thousands of attacks on the Gaza Strip, most of them from the air, but also from the sea and land. The Israelis say they inflicted serious damage on Hamas, which controls Gaza.

Those attacks also took a high toll on civilians. Of the 248 Palestinians killed, 66 were children, Palestinian officials say. That toll brought an international outcry and pressure on Israel from its close ally, the United States, to end the hostilities. The Israeli assault also cause widespread destruction to buildings and other infrastructure in the already impoverished Gaza Strip, deepening a long-running humanitarian crisis. 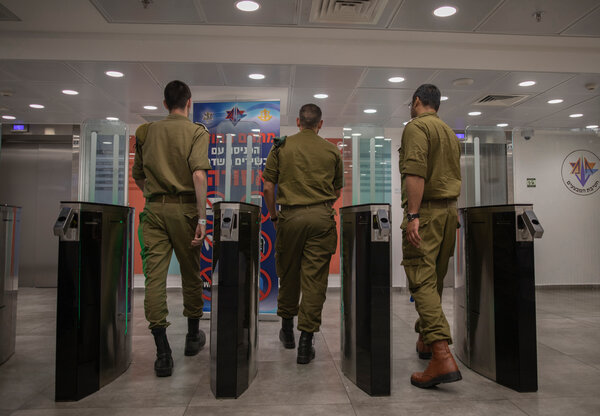 The first noticeable thing upon entering the bunker is the silence. None of the drama and tragedy of war is apparent, and people appear alert, focused and calm.

The command post is built for operations based heavily on intelligence and carried out from the air or by small groups of special forces. It compiles information from disparate agencies into one database and translates it into operational terms.

It is a place where people are measured by the number of approved targets — warehouses, tunnels or weapons that the military can attack. When a senior officer approves one, it is added to a “Targets Book” that the chief of staff reviews once a month.

Over the last two decades, the “targets” have increasingly been people — like senior Hamas figures.

The military is well aware of the criticism of its tactics, and the loss of innocent lives, which have drawn condemnation from inside and outside the country.

One senior officer, aiming to show that Israel had tried to minimize civilian deaths, points to detailed aerial photographs of an operation that he said had been canceled because its target was a Hamas facility near a Gaza hospital. He said many others had been similarly canceled out of concern for civilian casualties.

The head of the Intelligence Division’s Targets Branch, identified as Lt. Col. S. because the military does not allow the intelligence officers to be named in the news media, said he did not think soldiers became coldhearted by reducing people to “targets.”

Another commander working in the bunker said, however, “You can’t kill someone without something dying in you, too.”

Maj. Gen. Nitzan Alon, a former director of operations for the Israeli military, said he understood that the distance from the battlefield and the treatment of people as “targets” could create indifference to human lives.

“This is part of the commander’s challenge,” he said, to ensure that the operation is effective and “to know that there are human beings at the other end.”

Israel also regularly accuses Hamas of hiding its facilities and weapons inside or near civilian buildings, effectively using civilians as human shields.

During regular times, 300 to 400 soldiers work there around the clock. When Israel decided to launch its air assault on Gaza, thousands from military headquarters above ground joined the bunker. Also present were members of intelligence agencies like the Mossad and Shin Bet, Israel’s domestic intelligence agency, and Foreign Ministry and police representatives.

For 10 days, they commanded operations from the bunker. Most of them scarcely left.

Inside the nerve center, about 70 people were arrayed on different levels so that everyone could see the screens on the wall. Most were in military uniforms and under 25, and those out of uniform were mostly older.

They sat at tables with computers, landline phones or more obscure communication devices. Some of their keyboards fed data into the wall screens — a detailed breakdown of attacks carried out and damage done to Hamas.

Israel estimates that it destroyed 15 to 20 percent of Hamas’s rocket arsenal and some weapons production facilities. It claims to have killed about 200 Hamas operatives and eliminated 30 percent of the tunnels under Gaza used for sheltering militants, housing command systems and moving weaponry around.

The nerve center also had a map with locations of ground forces and military aircraft throughout the Middle East.

In the hours just before cease-fire, it was clear that Israel was eager to deal powerful final blows to Hamas. One screen tracked rocket launches from Gaza and a possible hit on a kibbutz in southern Israel.

At 2 a.m., the commander echoed the chief of staff’s order to cease hostilities. But no one was going home. The post remains on combat alert until Israel determines that the fragile cease-fire will last.

“Fortress of Zion” took 10 years to design and build. Dug deep into the earth, it is protected from a variety of threats, including nuclear attacks. It has enough energy, food and water to function even if its occupants cannot get to ground level for a long time.

It is an extension of an old command post, nicknamed “the pit,” that was expanded several times but was deemed too small and gloomy and had electricity and sanitation problems.

More important, Maj. Gen. Aharon Haliva, the current director of operations for the military, said, “Over the years, the Israel Defense Forces’ needs have changed.”

The huge ground wars of decades gone by gave way to more frequent but smaller operations — known as the “war between the wars.” And that shift meant relying more on technology and a digital network to pool intelligence, General Haliva said.

The bunker is connected via technology to another underground command post for Israel’s political leaders near Jerusalem, the Air Force’s underground headquarters and the Shin Bet’s command center.

The complex includes a gym, a synagogue, a kitchen and dining rooms, and a bedroom for guests with a row of clocks from different parts of the world, Tehran among them. There is also a lounge with food and nonalcoholic drinks — the only spot where soldiers can use their cellphones.

One floor is occupied by the army’s high command, including a private bedroom for the chief of staff with simple furnishings mirrored throughout the bunker.

Various military and intelligence departments feed the nerve center with information and have a representative physically present. The combined operation allows for a large number of strikes in an almost continuous stream.

Some efforts were made to give the windowless bunker a pleasant atmosphere, decorated with pictures of scenic places in the country and a famous quote by Israel’s found father, David Ben-Gurion, that reads: “In the hands of this army, the security of the people and the homeland will now be entrusted.”