GAZA CITY — Gazans took to the streets on Tuesday evening, cheering the thunderous sounds of rockets being fired toward Israel just days after the Israeli police in Jerusalem raided one of the holiest sites in Islam. Some whistled and chanted.

But on Wednesday morning the cheers had stopped, as Gazans emerged dazed from their homes after what some described as the most intense airstrikes since cross-border Israeli-Palestinian hostilities flared back up earlier this week. After a night of sporadic strikes, a final barrage lasted one seemingly endless hour, beginning around 6 a.m.

In one neighborhood, near Zeitoun and Sabra, residents checked their homes and neighborhoods for damage, and desperately sought information about where the missiles might strike next.

“I felt that the hits were random,” said Nadal Issa, 27, who owns a bridal shop. 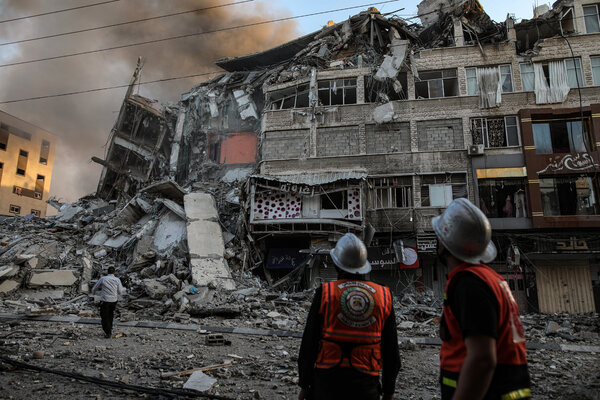 In Gaza, though, some they had never felt anything as intense as the wave of Israeli strikes that came Wednesday morning.

Some said it felt as if blast waves were hitting their face and body, as if their very neighborhood was under attack. Disoriented, they staggered to windows to look outside.

“My two children woke up, and they asked me, ‘What’s going on?’” Mr. Issa said. Thinking quickly, he reminded them that the holiday marking the end of Ramadan was near. “I told them these are celebrations for Eid.”

But in a period when Muslims pray for forgiveness and a good coming year, the cycle of retaliation playing out in Israel and Gaza this week has bred bitterness. Mr. Issa recalled standing by a window of his home Tuesday evening and watching the rockets take flight.

“I was praying from my heart that the rockets reached the heart of Tel Aviv,” he said.

Mohammed Sabtie, a 30-year-old motorcycle mechanic, was among Gazans who left their homes after the airstrikes subsided Wednesday morning to see the damage.

“The sound was very, very horrific,” Mr. Sabtie said. “It was like a state of war. It was the first time I ever heard anything like this.”

Was he scared? Yes, he said, but also overjoyed to see Palestinians fighting back.

As Gazans try to minimize risk to their families, they are aware that there are few places in the crowded city to find shelter, so they settle on little details, and luck.

Some leave their windows open during attacks, lest a pane of glass suddenly become a rush of shards. Many try to figure which direction the most intense bombardment is coming from, and move to a room farthest away. There’s a rush for ground-level apartments and rooms.

And then, mostly, they try to sleep, if they can.

On Tuesday night, one shopkeeper in an office tower was among those evacuating after being told by Israel that the building would be targeted for an airstrike, he said. The shopkeeper, who runs a currency-exchange store in the building and asked not to be identified, was devastated. He said he had recently gotten engaged, and went into debt to pay for his wedding. He feared he would lose everything.

Then it fell quiet, oddly so, for almost three hours. One more chance to try to sleep.

In one home early Wednesday, that restless sleep was disturbed by a ringing phone. The caller was a Palestinian who had left for Turkey, and he remarked on the relative calm.

“Maybe this is the quiet before the storm,” he said.

Not long after, the thunder from the morning airstrikes washed over their neighborhood.