Palestinian President Mahmoud Abbas has called for an international peace conference to convene by mid-2018 in order to restart the stalled Israeli-Palestinian talks.

Speaking at the United Nations Security Council on Tuesday for the first time since 2009, the 82-year-old delivered a speech that included the same previous rhetoric of rejecting violence and accepting negotiations with Israel as the only way forward.

“We believe negotiations are the only path towards peace, so how can we reject negotiations?” he said.

Abbas spoke during a political climate that saw tensions reach a boiling point after the United States’ recognition of Jerusalem as the capital of Israel last December. The move led the Palestinian leadership to reject the role of the US as an honest broker in negotiations with Israel.

Furthermore, US President Donald Trump’s administration has cut down funding for UNRWA, the UN agency that helps many Palestinians, which has dealt the Palestinian Authority another blow.

Abbas also called for a “multilateral mechanism” at the meeting, and vowed Palestinians will step up efforts to achieve full membership at the UN. Currently, the state of Palestine is designated non-observer member status.

He pointed out there have been 86 Security Council resolutions that have passed in the favour of Palestinians since 1948, none of which have been implemented.

“Israel is acting as a state above the law,” Abbas said. “It has transformed the occupation from a temporary situation as per international law into a situation of permanent settlement colonisation and imposed a one-state reality of apartheid.”

Speaking from the UN headquarters in New York, Al Jazeera’s diplomatic correspondent James Bays said the Palestinian Authority has lost faith in the US government’s ability to mediate.

“The Palestinians have given a year of the Trump administration and the efforts by [White House adviser and Trump’s son-in-law] Jared Kushner, and they believe that things are going seriously backwards not forwards,” Bays said.

“Now, they want to see the members of the Security Council listen to them when they say there needs to be a new way of coming up with some sort of peace settlement, a new format.”

The PA has been under pressure in the aftermath of the US decision to relocate its embassy from Tel Aviv to Jerusalem, after facing criticism from Palestinians and rival factions such as Hamas for engaging in negotiations with Israel during the past 25 years.

“The criticism was that was a waste of 25 years that hasn’t gotten the Palestinians anywhere,” said Al Jazeera’s Bernard Smith in the occupied West Bank city of Ramallah.

“If anything, the Palestinian cause, the desire for their own state with East Jerusalem as its capital has slipped further backwards. Israeli settlements continued to expand and there doesn’t seem to be anyone stopping them.

“This is why Abbas is speaking to the UN Security Council today, to try to advance some sort of idea of a new way of achieving mediation with the Israelis,” Smith said.

Mohammad Oweis, a political analyst based in Washington, DC, told Al Jazeera any future conference is already a “failure” as the Israeli and American UN ambassadors are “determined to derail anything that serves the rights of the Palestinian people”.

“There is no way for Palestinians and Israelis to sit for peace talks because the negotiations are prejudged by [the Trump’s administration’s] extreme fascist right-wing support to Israel and animosity against Palestinians,” he said, adding there is “nobody” that can fill the role of an honest broker.

Although Russia’s UN Ambassador Vassily Nebenzia told the council his country is “ready to provide a platform for Israelis and Palestinians without preconditions”, Oweis dismissed any potential role for Russia in the Middle East peace process.

“Everything [Nebenzia said] was in general terms,” he said. “I don’t think Russia can take any position because it is busy with its own fiascos in the Middle East.”

The Israeli UN ambassador Danny Danon spoke directly after Abbas, who left the meeting after his speech, and blamed the Palestinian president for inspiring “a culture of hate within Palestinian society”.

“You are part of the problem, not the solution,” Danon said, addressing Abbas.

For her part, the US ambassador to the UN, Nikki Haley, used her platform to dismiss the UN body, saying it spends a “disproportionate amount of time” discussing the Israeli-Palestinian issue.

“It’s not that these issues are not important,” she said. “The problem is that the UN has proven itself time and again to be a grossly biased organisation when it comes to Israel.

“As such, the UN’s disproportionate focus has actually made the problem more difficult to solve by elevating the tensions and grievances between the two parties.”

Haley, who arrived at the meeting with Kushner and Middle East Envoy Jason Greenblatt, also called on Abbas to get past his rejection of the US’ stance to recognise Jerusalem as Israel’s capital, telling him that decision will not change.

“You can choose to denounce the US, reject the US role in peace talks and pursue punitive measures against Israel in international forums like the UN,” Haley said.

“Or you can choose to put aside your anger at the location of our embassy and move forward with us towards a negotiated compromise that holds great potential for improving the lives of Palestinian people.”

Al Jazeera’s Bays highlighted the meeting’s “drama and theatrics” with the reality he described as “very depressing”.

“I have to say that nothing really has been achieved in the Security Council that brings us any closer to a resolution of a conflict that has gone on now for more than 70 years,” he said. 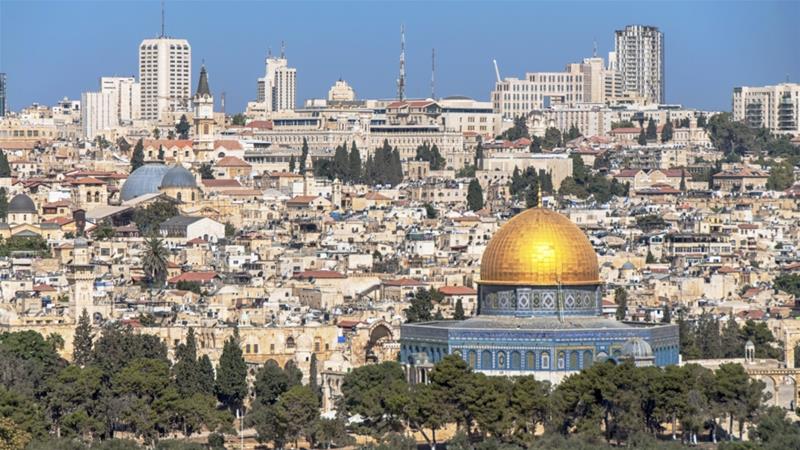 Jerusalem: Is the two-state solution dead?