JERUSALEM — When Israelis woke on Wednesday, the day after their fourth election in two years, it felt nothing like a new dawn.

With 90 percent of the votes counted, Prime Minister Benjamin Netanyahu’s right-wing alliance had 52 seats, while his opponents had 56 — both sides several seats short of the 61 needed to form a coalition government with a majority in Parliament. If those counts stand, they could prolong by months the political deadlock that has paralyzed the country for two years.

That prospect was already forcing Israelis to confront questions about the viability of their electoral system, the functionality of their government and whether the divisions between the country’s various polities — secular and devout, right-wing and leftist, Jewish and Arab — have made the country unmanageable.

“It’s not getting any better. It’s even getting worse — and everyone is so tired,” said Rachel Azaria, a centrist former lawmaker who chairs an alliance of environment-focused civil society groups. “The entire country is going crazy.”

Official final results are not expected before Friday. But the partial tallies suggested that both Mr. Netanyahu’s alliance and its opponents would need the support of a small, Islamist Arab party, Raam, to form a majority coalition.

Either of those outcomes would defy conventional logic. The first option would force Islamists into a Netanyahu-led bloc that includes politicians who want to expel Arab citizens of Israel whom they deem “disloyal.” The second would unite Raam with a lawmaker who has baited Arabs and told them to leave the country.

Beyond the election itself, the gridlock extends to the administrative stagnation that has left Israel without a national budget for two consecutive years in the middle of a pandemic, and with several key Civil Service posts unstaffed. 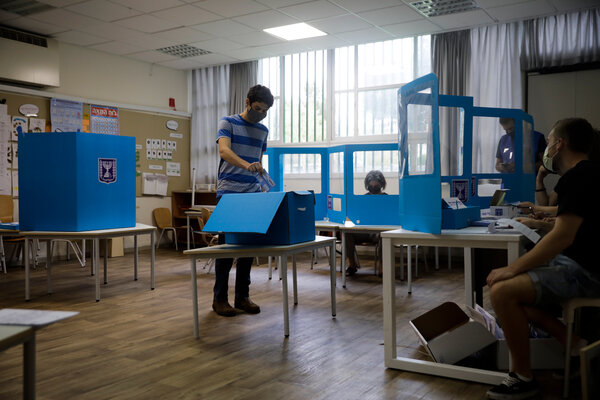 It also heightens the uncertainty over the future of the judiciary and about the trial of Mr. Netanyahu himself, who is being prosecuted on corruption charges that he denies. Mr. Netanyahu has also dismissed the claim that he will use any new majority to grant himself immunity, but others likely to be in his potential coalition have said that would be up for debate.

And both the prime minister and his allies have promised a sweeping overhaul that would limit the power of the Supreme Court.

Shira Efron, a Tel Aviv-based analyst for the Israel Policy Forum, a New York-based research group, said, “It’s not a failed state. It’s not Lebanon. You still have institutions.”

“But there is definitely an erosion,” she noted. “Not having a budget for two years — this is really dangerous.”

Mr. Netanyahu has presided over a world-leading vaccine program, in an illustration of how some parts of the state still operate very smoothly. But more generally, the lack of a state budget forces ministries to work on only a short-term basis, freezing long-term infrastructure projects like road construction.

For Ms. Azaria, the former lawmaker, the stasis has delayed the discussion of a multibillion-dollar program to improve the provision of renewable energy, which her green alliance proposed to the government last year.

“We’re talking about taking Israel to the next stage in so many ways, and none of it can happen,” Ms. Azaria said. “There is no decision making.”

“Railway tracks, highways, all of these long-term plans — we won’t have them,” she added.

Israeli commentators and analysts were locked in debate on Wednesday about changes to the electoral system that could break the deadlock.

Some argued for the need to raise the 3.25 percent threshold of votes required for parties to enter Parliament. That would make it harder for smaller factions to gain seats and wield disproportionate power in negotiations to form coalition governments.

Others proposed establishing multiple voting districts in Israel, instead of the current setup of one nationwide voting district, which they say would encourage smaller parties to merge into larger ones.

One columnist suggested forming a technocratic government for a few months to allow for a new budget and to get the economy moving again.

And one expert suggested simply anointing the leader of the largest party as prime minister, without the need for them to win the support of a parliamentary majority — a move that would at least ensure that Israel had a government following elections.

“It might manufacture a majority for one of the sides,” said Prof. Gideon Rahat, co-editor of a book called “Reforming Israel’s Political System.”

But the problem might also be solved if Mr. Netanyahu simply left the political stage, Professor Rahat added.

“If you look at the results, the Israeli right wing has a clear majority and it would have a stable government if it wasn’t for Netanyahu,” he said.

But for others, Israel’s problems extended beyond Mr. Netanyahu or fixes to the electoral system. For some, the impasse is rooted in more profound fissures that divide various parts of society, splits that have contributed to the political fragmentation.

The country has several different fault lines — between Jews and the Arab minority, who form about 20 percent of the population; between Jews of European descent, known as Ashkenazis, and Mizrahi Jews whose ancestors lived for centuries in the Middle East; between those who favor a two-state solution to the Palestinian conflict and those who want to annex the West Bank.

The fact that Mr. Netanyahu is still within reach of retaining power demonstrates that he has been more effective in bridging the divide between secular and deeply devout Jews than any other rival, said Ofer Zalzberg, director of the Middle East program at the at the Herbert C. Kelman Institute, a Jerusalem-based research group.

“He has reconciled better than his adversaries the liberal idea of personal and individual autonomy with conservative values like preserving Jewish identity, as defined by Orthodox interpretations of Jewish law,” Dr. Zalzberg said.

While other politicians historically tried to solve this tension by “turning all Israelis into secular Zionists,” he added, “Mr. Netanyahu advanced the idea of Israel as a mosaic of different tribes.”

Mr. Netanyahu has failed to win over the more liberal of those tribes — and that failure is at the heart of the current stalemate. But he and his party have been more successful than the secular left at winning over key groups like Mizrahi Jews, who were historically marginalized by the Ashkenazi elite, Ms. Azaria said.

“That’s the blind spot of the of the left wing in Israel — they’re not really talking to Mizrahim,” she said. “This could be the game changer of Israeli politics. If the left could open the gates and say, ‘You’re welcome. We want you here.’”

The political stalemate has also been exacerbated by a reluctance by Jewish-led parties to include Arab parties within their governments, ruling the latter out of coalition negotiations and making it even harder to form a majority.

Arab parties have also been traditionally opposed to joining Israeli governments that are in conflict with Arab neighbors and occupy territories claimed by the Palestinians.

But for Dr. Efron, the Tel Aviv-based analyst, there were hopeful signs of a paradigm shift on Wednesday morning. With the election results on a knife edge, some politicians were forced to at least consider the possibility of a pivotal political role for an Arab party such as Raam.

And such a discussion might accelerate the acceptance of Arabs within the Israeli political sphere, she said.

“It brings more integration,” Dr. Efron added. “In the long run, that could be a silver lining.”