BRUSSELS — The Arab world is unified in condemning Israeli airstrikes in Gaza and the way the Israeli police invaded Jerusalem’s Aqsa Mosque, one of Islam’s holiest sites. Governments have spoken out, protests have taken place, social media is aflame.

But by and large the condemnation is only words, not actions — at least so far. The region’s concerns have shifted since the last major Israeli incursion into Gaza in 2014, with new fears about Iran’s influence, new anxieties about popular unrest in Arab countries and a growing recognition of the reality of Israel in the Arab world.

Even those countries that normalized relations with Israel last year — the United Arab Emirates, Bahrain, Sudan and Morocco — have all openly criticized Israeli policies and called for support of the Palestinians and the defense of Jerusalem. The escalation of violence has put a great strain on those governments, which had argued that their closer relationship with Israel would help restrain Israeli actions aimed at the Palestinians in both the West Bank and Gaza.

“I have not seen any Arab state that has not expressed support for the Palestinians on a rhetorical level, and it would be very difficult for them to say anything otherwise,’’ said H.A. Hellyer, a scholar of Middle East politics at the Carnegie Endowment in Washington. “But what they do about it is very different.’’

The Egyptian government, which regards Hamas, the militant Islamist group that controls Gaza, as a branch of the outlawed Muslim Brotherhood and a danger to the region, is nonetheless wary of public sentiment.

A sermon on Friday at Al Azhar Mosque in Cairo, one of the most influential in the Arab world, was unusually critical of the cowardice of Arab leaders in defending Jerusalem, a sermon that is bound to have been approved by the government, said Ofir Winter, a specialist in Egypt and the Arab world at the Institute for National Security Studies at Tel Aviv University.

Hamas is little loved by governments across the Sunni Arab world, but its loud messaging that it was firing against Israel in defense of Jerusalem and the Aqsa Mosque struck a chord, said Khaled Elgindy, director of the Palestine program at the Middle East Institute. Gaza is one thing, but “Jerusalem is important for the Arab League and for clear stakeholders, like the Jordanians and the Saudis,’’ who are the guardians of the holy places of Islam, he said. 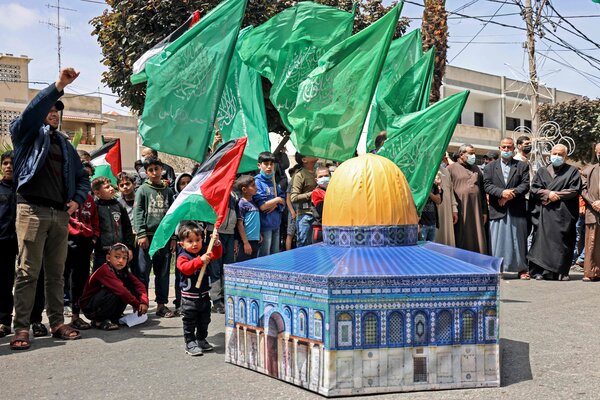 For Bahrain and the United Arab Emirates to condemn the Israeli police raid of the Aqsa Mosque on Monday — which left hundreds of Palestinians and a score of police officers wounded — was “a no-brainer for them given the sensitivity of Al Aqsa and the violence shown to worshipers on the holiest night of Ramadan in one of Islam’s holiest sites,’’ said Zaha Hassan, a human rights lawyer and a visiting fellow at Carnegie.

At the same time, Ms. Hassan said, Israel’s moves to expel Palestinian families from Sheik Jarrah, a Palestinian neighborhood in East Jerusalem, resonated with Palestinians in exile both abroad and in Israel. “There is not a single Palestinian who doesn’t know what it means to have their home taken or threatened to be taken,’’ Ms. Hassan said.

Hamas had been vowing for weeks that it would defend Jerusalem, and after those events in the city at the start of this week, it acted on its threats, firing a barrage of rockets at Jerusalem and drawing Israeli airstrikes in return.

Egypt and Jordan, which have long had diplomatic relations with Israel, are deeply engaged in trying to de-escalate the conflict, but they must also be wary of public anger, which would only worsen if Israel were to launch a full-scale ground war against Hamas in Gaza.

Qatar, which bankrolls Hamas in Gaza, has also tried to mediate, with its foreign minister holding talks with both the Hamas leader, Ismail Haniya, and U.S. National Security Adviser Jake Sullivan.

President Abdel Fattah el-Sisi of Egypt, while sending security officials to try to mediate between Israel and Hamas, has himself said little about current events.

However, his foreign minister, Sameh Shoukry, told Arab colleagues at an urgent Arab League meeting that “the way that Arabs — on the popular and official levels — are intent on following what is happening in Jerusalem is the greatest message that affirms Palestine has been and will always be the central Arab cause.”

The Arab League is also pressing for an emergency debate in the U.N. Security Council, which the United States put off until at least Sunday. The Arab League needs to keep in front of the debate on Jerusalem, the analysts agree, and not cede the field to Hamas.

“This time the struggle is not only about Gaza but about Jerusalem and Al Aqsa and Muslims are committed to their defense,’’ Mr. Winter said. “Hamas has done a good job in its messaging strategy, and Arab countries must deal with this interpretation.’’

Egypt’s government is also worried, as are many in Israel, that destroying Hamas might open the door to even more radical actors in Gaza. But Egypt and other Arab countries, even if they repress internal protests and dissent, must align themselves in some fashion with public opinion, even if they fear that protests against Israel might quickly turn into protests against themselves.

For the Arab countries that recently recognized Israel, the confrontation is an embarrassment and a dilemma because it tests their influence, or lack of it, on Israel, analysts said.

The diplomatic recognitions were “supposed to give them leverage, and one of their arguments was that Israel won’t want to disrupt these new relations with the Arab world and so will hold back on things like settlements and Gaza,’’ said Mr. Elgindy of the Middle East Institute.

In fact, he said, “I believe the opposite — the Israelis now have more cover.’’

While these countries are unlikely to sever their new ties with Israel because of the economic and technological benefits, it will be more difficult for Morocco and Sudan, where there are more open displays of public opinion.

Qatar and Turkey are among the most prominent defenders of Hamas. Qatar owns the powerful Al Jazeera network, which is giving full coverage to the Palestinian and Hamas side of the story.

President Recep Tayyip Erdogan of Turkey has long been a fervent critic of Israeli policy toward the Palestinians, especially in Gaza. On Friday, in predictably harsh terms, he vowed that Turkey would not stay silent and accept the persecution of Palestinians.

“By attacking the sacred site of all three religions, the terrorist state of Israel has crossed all boundaries,” Mr. Erdogan said, addressing his ruling party. “If we don’t stop the attacks now, everyone will become targets of this savage mentality.”