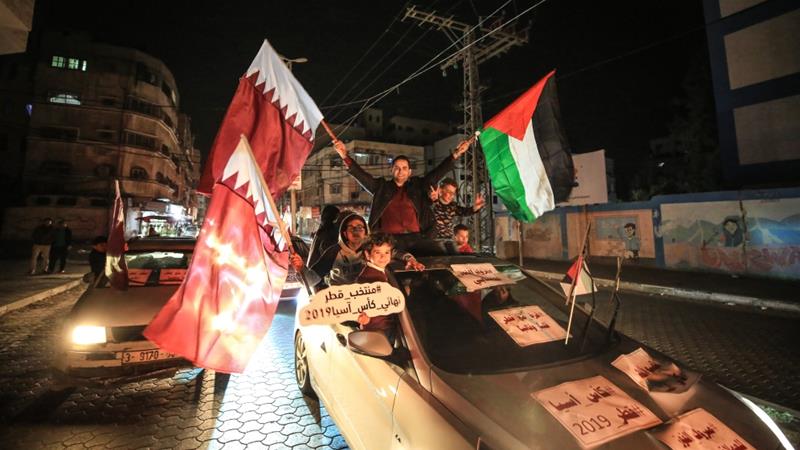 Football fans across the Arab world have celebrated Qatar’s historic AFC Asian Cup win as an “Arab victory” after the Gulf country beat four-time champions Japan 3 -1 in the final held in the United Arab Emirates (UAE).

Festivities were in full swing in Arab countries as Qatar was crowned Asian champions on Friday night, with celebrations extending well into the early hours of Saturday.

“A tribute to our heroes who made this tournament an Arab achievement and… realised the dreams of millions of Qatari football fans across the great Arab world,” Sheikh Tamim wrote on his personal Twitter account.

In Jordan, dozens of football fans shared videos on social media as they gathered at public squares to celebrate the win. The fans sang songs in support of Qatar’s victory as groups performed traditional folk dances and raised the Qatari flag.

Likewise, in Sudan, revellers raised Sudanese and Qatari flags as they sounded their horns and drove through the streets to celebrate the win.

Soon after the Qatari national team scored the final goal, football fans in the Gaza Strip launched an all-night celebration. Fans carried Palestinian and Qatari flags, while some held banners with words: “Qatar represents the Arabs in the Asian Cup”.

Revellers drove their cars through Gaza’s streets, while others launched fireworks and a dance troupe performed traditional songs.

Palestinians had gathered at a beach complex where the Supreme Council for Youth and Sports in Palestine held a screening for the match, reported the Middle East Eye on Friday.

Abdel Salam Haniyeh, a member of the council, had called on Palestinians to attend the event in support of the Qatari team, according to the report.

In Kuwait, football fans eagerly watched the match from their homes and among large crowds in public areas. They celebrated each goal as striker Almoez Ali opened the scoring for the Maroons with a spectacular overhead kick – his record ninth goal of the tournament.

Ali’s 12th-minute strike took him past Ali Daei’s 1996 tally, and combined with a 27th-minute strike from Abdulaziz Hatem and a late Akram Afif penalty, helped the Qataris make an emphatic statement in the run-up to their hosting of the 2022 World Cup.

In Oman, the fans sacrificed camels in celebration of the Asia Cup win, according to fans on social media, while large crowds gathered in the port city of Sohar to greet the Qatari national team on their arrival from the UAE en route back to Doha.

Qatar’s road to the final had not been without controversy.

The hosts UAE, along with Saudi Arabia, Bahrain and Egypt severed all diplomatic and economic ties with Qatar, imposing a land, sea and air blockade on the Gulf nation in June 2017, accusing Doha of supporting terorrism and fostering closer ties with Iran. Qatar has denied all the charges.

The Maroons had to take a circuitous route via Kuwait to get to the tournament, an air journey that took more than five hours when a direct flight would take under an hour.

Playing against the backdrop of the bitter regional dispute and without any fans in the stands, Qatar beat Saudi Arabia 2-0 in a group match and then thrashed UAE 4-0 in a semi-final that saw shoes and bottles hurled at the Qatari players.

Al Jazeera’s Andy Richardson, reporting from Aspire Park in the Qatari capital, Doha, on Friday said: “Coming into this tournament they were ranked outside of the top 10 in Asia, down at 93 in the world rankings – not much expected of them. But if you looked a little bit deeper there were signs this was a team on the rise.”

Qatar will host the FIFA World Cup in 2022, becoming the first Arab country to do so.