JERUSALEM — A new front opened in the military showdown between the Israeli Army and Palestinian militants in Gaza on Wednesday as a wave of mob violence between Jews and Arabs spread across several Israeli cities, leading to riots and attacks in the streets as rockets and missiles streaked across the sky.

Israel said it assassinated 10 senior militants and continued to pound both military and residential areas across the Gaza Strip with airstrikes, while Hamas, the Islamist group that rules Gaza, and its allies continued to fire rockets into civilian areas across central and southern Israel.

More than 1,000 rockets had been fired from Gaza by Wednesday night, most of them intercepted by an antimissile defense system, the Israeli military said.

Over 67 Palestinians, including 16 children, have died since the start of the conflict on Monday, Palestinian health officials said. The rockets fired by Hamas and its Islamist ally, Islamic Jihad, killed at least six Israeli civilians, including a 5-year-old boy, and one soldier. 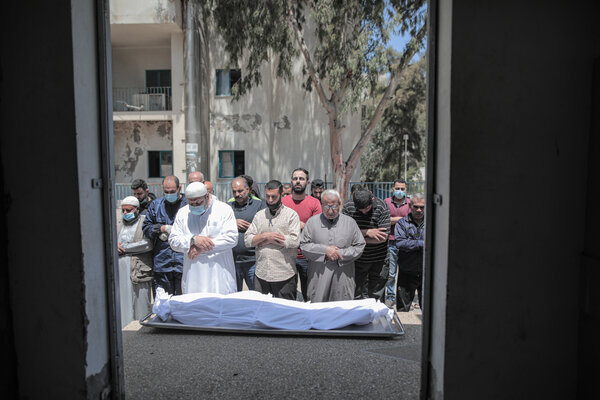 But the most unexpected developments occurred on the streets of Israeli cities and towns, as rival Jewish and Arab mobs attacked people, cars, shops, offices and hotels.

One of the most chilling incidents occurred in Bat Yam, a seaside suburb south of Tel Aviv, where dozens of Jewish extremists took turns beating and kicking an Arab driver, even as his body lay motionless on the ground.

Israeli officials said they had “locked down” the city of Lod in central Israel, the first time such an action has been taken in decades, and arrested 280 people accused of rioting across the country.

Prime Minister Benjamin Netanyahu described the violence as “anarchy” and convened an emergency cabinet meeting that lasted into the early hours of Thursday to “give more powers to the police” and enforce curfews “as needed.”

The sudden turn of events, which in less than two full days has escalated from a localized dispute in Jerusalem to full-scale aerial war over Gaza to widespread civil unrest, shocked Israelis and Palestinians alike, and left some of the country’s most experienced leaders fearing that the decades-old Israel-Palestinian conflict was heading into new territory.

For years, leaders warned that a failure to resolve the Israeli-Palestinian conflict might eventually lead to fighting within the state of Israel itself, said Tzipi Livni, a veteran former cabinet minister and former chief negotiator in peace talks with the Palestinians.

“And this is exactly what is happening now,” she said. “What was maybe under the surface has now exploded, and created a combination that is really horrific.”

“I don’t want to use the words ‘civil war’,” she added. “But this is something that is new, this is unbearable, this is horrific, and I’m very worried.”

The unrest has shifted the Palestinian conflict to world attention after several years in which attempts to resolve it had faded from both the global and domestic agenda. Once a centerpiece of international diplomacy, there have been no serious peace talks since the Obama administration.

For weeks, ethnic tensions had been rising in Jerusalem, the center of the conflict. In April, far-right Jews marched through the city center, chanting “Death to Arabs,” and mobs of both Jews and Arabs attacked each other.

Palestinian anger increased as a deadline to expel several families from their homes in Sheikh Jarrah, East Jerusalem, approached — a case that quickly became a stand-in for historic expulsions of Palestinians from their land elsewhere in Israel.

The situation finally boiled over after a police raid on one of Islam’s holiest sites, the Aqsa mosque in Jerusalem, on Monday, which the police said was in response to stone-throwing by Palestinian demonstrators.

Hamas launched long-range rockets at Jerusalem on Monday evening, prompting Israel to respond with airstrikes. The military conflict also unleashed a wave of protests and rioting in Arab areas across Israel that night.

As the violence escalated, diplomats around the world called for both sides to end the fighting.

Speaking to reporters, President Joseph R. Biden said that he had spoken “for a while” to Prime Minister Benjamin Netanyahu on Wednesday and said his expectation was that tensions would be “closing down sooner rather than later.” Mr. Biden added that “Israel has a right to defend itself, when you have thousands of rockets flying into your territory.”

In Kuwait and Istanbul, there were protests on Tuesday night.

While the immediate triggers for the Palestinian rioting were the Aqsa mosque, the Sheikh Jarrah case and the Gaza conflict, the riots also gave vent to years of pent-up anger from Israel’s Arab minority, who represent about 20 percent of the population.

They have full citizenship and many have become lawmakers, judges and senior civil servants. But rights advocates say they are nevertheless victims of dozens of discriminatory laws, not least a recent law that downgraded the status of the Arabic language and said that only Jews had the right to determine the nature of the Israeli state.

“The way that we are treated is as though we shouldn’t be here,” said Diana Buttu, a Palestinian political analyst from Haifa, a northern city in Israel, and a former legal adviser to the Palestine Liberation Organization. “We are the people who they mistakenly did not ethnically cleanse from this place.”

In the central city of Lod, the government declared a state of emergency early Wednesday after a synagogue, school and several vehicles were burned by Arab rioters on Monday and Tuesday nights.

A Palestinian citizen, Moussa Hassouna, was shot dead by a Jewish resident during the disturbances on Monday night, and another wave of unrest followed his funeral 24 hours later.

The Israeli police said that Arab mobs were pulling Jews from their homes and trying to kill them.

“I feel like it’s 100 years ago, and I’m a defenseless Jew in the pogroms,” said Shabtai Pessin, 27, standing in a burned-out classroom at a religious school in Lod. “What’s our sin? Wanting a Jewish state after 2000 years of exile?”

In the northern city of Acre, a popular Jewish fish restaurant was set on fire, while Arab Bedouins attacked police stations and passing cars in the Negev desert, in southern Israel.

On Wednesday, these riots prompted crowds of Jews to respond.

In the cities of Or Akiva and Beersheva, Jews stoned the cars of people they believed to be Arab. In Tiberias, they threw rocks at hotels housing Arabs, who hurled objects from their windows in return. Cars were set on fire in several towns. And an Arab mob in Haifa ransacked a Jewish-owned hotel.

“It’s happening as we speak,” the hotel’s owner, Evan Fallenberg, said by phone on Wednesday night. “People are saying this is a rupture that we won’t be able to overcome. I don’t believe that — I know my friendships are lasting ones. But it is going to put everything to the test. We’re headed into something extremely difficult and dangerous, and I don’t know where this is going to end or how.”