AL MUGHAYIR, West Bank — A gang of a dozen or so armed Jewish settlers descended from a hilltop outpost to the Palestinian village below and opened fire, witnesses said. Israeli soldiers arrived, and instead of stopping the settlers, the witnesses said, they either stood by or clashed with the villagers.

In the melee, Hamdy Naasan, 38, a Palestinian father of four, was shot and killed.

The killing last Saturday was the latest in a wave of settler violence. Attacks by settlers on Palestinians, their property and Israeli security forces increased by 50 percent last year and have threatened to ignite the West Bank, Israeli security officials say.

Days earlier, the Israeli authorities charged a 16-year-old yeshiva student from another Jewish settlement with manslaughter and terrorism, accusing him of hurling a four-pound rock that killed Aisha al-Rabi, a Palestinian mother of eight, one night in October as she rode in her family car along a nearby highway.

While Palestinian and United Nations officials have condemned the violence — Nickolay E. Mladenov, the United Nations envoy to the Middle East, described the shooting in Al Mughayir as “shocking and unacceptable” — Israel’s right-wing government has remained conspicuously silent, wary of alienating settlers and other potential supporters in an election year.

Prime Minister Benjamin Netanyahu, who is seeking a fifth term, is vying with other right-wing rivals for the settlers’ support. He is facing bribery investigations and his strongest political challenge in years.

“Thou shalt not murder?” Tamar Zandberg, leader of the left-wing party Meretz, wrote in a Facebook post, noting the resounding lack of condemnation from government officials. “Silence. Everyone sees the election on the horizon, and the settler lobby is stronger than any moral standard.” 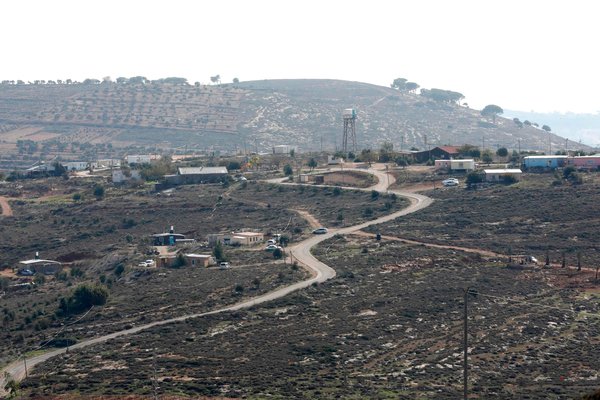 By contrast, after a Palestinian home in the village of Duma was firebombed in 2015, killing a toddler and his parents, Mr. Netanyahu and right-wing leaders issued strong condemnations and said Jewish terrorism would not be tolerated.

This time the loudest voices have risen to the defense of the Jewish suspects. Israel’s domestic security agency, the Shin Bet, has found itself on the defensive, accused by right-wing organizations of trampling on the rights of those suspected in the stoning.

Honenu, a right-wing legal aid organization, denounced the fact that the five youths initially detained in the woman’s attack had been denied access to legal counsel for days under court-approved counterterrorism laws. About 100 rabbis, including prominent voices in the religious Zionist and settler establishment, signed an open letter in support of the youths.

The justice minister, Ayelet Shaked, called the mother of one of the detainees, telling her to “be strong” and saying she had discussed his case with the state prosecutor. One legislator from the governing Likud party compared the Shin Bet to the K.G.B. Four of the youths were ultimately released.

Mr. Netanyahu did rebuff the attacks on the Shin Bet, praising its successes in thwarting Palestinian terrorism.

For over a decade, radical young settlers known as the hilltop youth have practiced the doctrine known as “Price Tag,” which calls for exacting a price through violence or vandalism in revenge for Palestinian attacks on Jews or for army or police moves against rogue settlement activity.

A week before the stoning attack, a Palestinian gunman fatally shot two Israeli workers in an Israeli-run factory in the West Bank. In December, two Palestinian attacks on a West Bank road killed two Israeli soldiers and critically wounded a third soldier and a pregnant woman. Her baby was delivered early and died three days later.

Violence is endemic around settlements deep in the West Bank, and Jewish attacks often follow Palestinian ones, said Shlomo Fischer, an expert in radical religious Zionism at the Jewish People Policy Institute in Jerusalem. “The right is tending to view this in terms of a vendetta,” he said.

Security officials partly attribute the surge in settler violence to the recent lifting of restrictions from some main activists.

The authorities had imposed antiterrorism measures after the 2015 Duma attack and the subsequent exposure of a shadowy militant network known as “the Revolt.” The group seeks the collapse of the state of Israel and its replacement with a Jewish kingdom based on religious law.

The extraordinary steps included administrative detentions and orders keeping key radicals out of the West Bank. Those temporary orders have now run out.

The Shin Bet pointed to links between the yeshiva, or religious school, attended by the suspect in the stoning case and the kind of anti-Zionist, messianic ideology behind the Revolt. An Israeli flag scrawled with “death to the Zionists” and a swastika was found in a yeshiva dorm.

Some of the rabbis teaching at the yeshiva, Pri Haaretz, are associated with the extremist margins of the settlement movement. One of the yeshiva’s founding directors, a senior officer in Israel’s military reserves, was suspected of killing a Palestinian man in disputed circumstances in late 2017.

The links became apparent the morning after the killing of Ms. al-Rabi, when a car set out from the settlement of Yitzhar to coach the students in how to deal with Shin Bet interrogations. The occupants included Meir Ettinger, the alleged leader of the Revolt and a grandson of Meir Kahane, the slain American-Israeli rabbi considered the father of far-right Jewish militancy, and Akiva HaCohen, considered one of the architects of the Price Tag policy.

Pri Haaretz sits in a scruffy compound at the entrance of the settlement of Rehelim, a small community with neat rows of houses and a boutique winery.

On a recent weekday, chickens scratched around in the dirt outside a dozen or so trailers housing classrooms and living quarters. Pupils sported the flowing side-locks associated with the hilltop youth. Two severed goats’ heads were impaled on a chain-link fence, gruesome trophies from an apparent practice session in ritual slaughter.

Some residents of Rehelim now want to expel Pri Haaretz from the settlement. One said the school’s ideology was too extreme and was bound to cause trouble. Yeshiva leaders refused to comment.

The suspect whose DNA was found on the rock denied any involvement, according to his lawyers. He has not been publicly identified because he is a minor. One rabbi provided law enforcement with an apparent alibi, declaring that he had been eating and singing with the pupils at the yeshiva, including, to the best of his memory, the one who was later charged, till midnight.

Recounting the events of that night in an interview, Ms. al-Rabi’s widower, Yacoub, described how the stone smashed through the front windshield, striking his wife in the head and causing her brains and blood to spill out “like a waterfall.” She died on the spot.

The Israeli military and police are now investigating the death of Mr. Naasan.

The settlers say the clash started with an attack on a Jewish teenager who was staying in the settler outpost of Adei Ad over the Sabbath. In a recorded statement, the teenager said he had walked out of Adei Ad to spend some time alone, was accosted by Palestinians, managed to get away, realized his arm was bleeding and ran back to the outpost for help.

Adei Ad representatives initially put out a contradictory statement saying that a local armed response force had set out to rescue a group of hikers and to rule out a report that one was missing, and that it had also been chasing the assailants. They said the force fired in the air after being ambushed by hundreds of violent Palestinians and was joined by soldiers who also opened fire.

In a later statement, they said the response team had operated together with the soldiers “according to the law.”

But residents of Al Mughayir said armed settlers first came down the hill and vandalized a tractor, smashing its windows and puncturing its tires. Farmers ran to ask some soldiers stationed nearby for help, but the soldiers told them to call the police.

Mr. Naasan’s cousin, Yasser Naasan, 34, said he went to check on the tractor but more settlers arrived, fired at him and chased him back to the village.

The mosque loudspeakers called on residents to come out and defend their homes. Palestinians threw stones. Witnesses said soldiers arrived and fired tear gas, stun grenades, rubber bullets and possibly live bullets in the air while settlers shot live ammunition. One resident showed photographs on his cellphone of armed settlers standing shoulder to shoulder with soldiers, and some settlers wearing masks.

“I witnessed a battlefield,” said Farraj Naasan, 53, an uncle of Hamdy Naasan. “There was massive shooting. Ta-ta-ta. I saw three Israeli soldiers firing into the air and three settlers firing directly at people.”

Hamdy Naasan worked in construction and spent seven years in an Israeli prison for security offenses. He was released in 2008. Last Saturday, his uncle said, he was helping evacuate the wounded.

“He carried the first and the second,” he said. “When he went up to get more of the wounded, he was shot.”

Mr. Naasan fell about 50 yards from the last home on the edge of the village. Another witness, Samir Abu Alia, 53, said villagers had to wait 20 minutes, until the shooting subsided, to retrieve his body.