JERUSALEM — Naftali Bennett, who leads a small right-wing party, and Yair Lapid, the centrist leader of the Israeli opposition, have joined forces to try to form a diverse coalition that would unseat Benjamin Netanyahu, Israel’s longest-serving prime minister.

Spanning Israel’s fractious political spectrum from left to right, and relying on the support of a small Arab, Islamist party, the proposed coalition, dubbed the “change government” by supporters, could mark a profound shift for Israel.

After grinding deadlock that led to four inconclusive elections in two years, and an even longer period of polarizing politics and government paralysis, the architects of the coalition have pledged to get Israel back on track.

Whether they can form a government, unseating Mr. Netanyahu, a wily political survivor who has fundamentally reshaped Israeli politics, by the deadline of Wednesday at midnight remains unclear. So does the question of how much change the “change government” could bring when some of the parties agree on little else besides enmity for Mr. Netanyahu.

Here are some basics about the political upheaval that could break Israel’s long impasse. 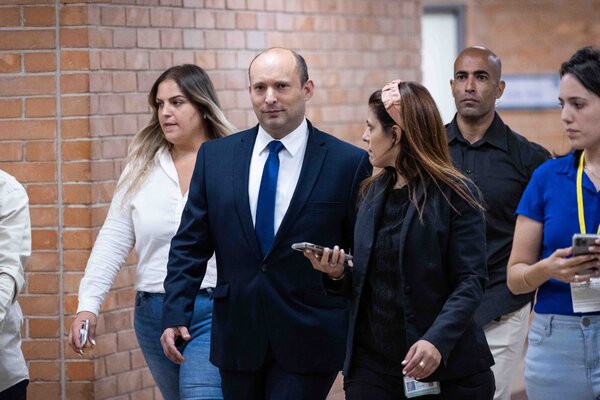 The biggest potential loser so far is Mr. Netanyahu and his conservative Likud party, which is by far the largest, having won 30 seats in the 120-seat Parliament last election. Two ultra-Orthodox parties that are his staunchest allies would also be out of government.

But even as Mr. Netanyahu faces the most serious challenge to his leadership in years, he remains at center stage. He earned the nickname “the magician” for a reason: his ability to maneuver himself out of tight corners.

He has governed Israel for 15 years in total, including the last 12 years, and has shifted Israeli politics decidedly to the right.

Mr. Bennett is considered to be even further to the right. While Mr. Netanyahu whittled away at the idea of a two-state solution, Mr. Bennett, a religiously observant champion of Jewish settlement in the occupied West Bank, openly rejects the concept of a sovereign Palestinian state and has advocated annexing West Bank territory. Still, though the coalition will include several parties that disagree on both those issues, they have agreed to allow Mr. Bennett to become prime minister first.

Though the party of Mr. Bennett, a former high-tech entrepreneur and defense minister, has only won seven seats in the March election, his modest electoral gains were enough to make him a linchpin of any future coalition, and he has leveraged his power with both sides to try to bargain his way to the top office.

If the coalition deal holds, Mr. Bennett would be replaced for the second part of the four-year term by Mr. Lapid, who advocates for secular, middle-class Israelis and whose party won 17 seats. Mr. Lapid said from the start that he was willing to make personal sacrifices in order to remove Mr. Netanyahu.

In addition, by conceding the first turn in the rotation, Mr. Lapid, who has been branded as a dangerous leftist by his opponents on the right, smoothed the way for other right-wing politicians to join the new anti-Netanyahu alliance.

In a measure of the plot twists and tumult behind this political turnaround, Mr. Bennett had pledged before the election not to enable a Lapid government of any kind or any government reliant on the Islamist party, called Raam.

The coalition would stand or fall on the cooperation between eight relatively small parties with heterogeneous ideologies and, on many issues, clashing agendas.

In a televised address on Sunday night, Mr. Bennett said he was committed to fostering national unity.

“Two thousand years ago, there was a Jewish state which fell here because of internal quarrels,” he said. “This will not happen again. Not on my watch.”

Mr. Lapid has until Wednesday at midnight to inform the president, Reuven Rivlin, that he has managed to cobble together a viable coalition. Once he has made that announcement, he has up to seven days to present the government to Parliament for a vote of confidence.

Still, some disagreements on ministerial appointments were being ironed out less than two days before the deadline. And with the fate of the new coalition dependent on a narrow margin and hanging on every single vote, its partners were racing to complete the agreement, aware that Mr. Netanyahu and his associates were on the hunt for potential defectors.

“There are still plenty of obstacles in the way of the formation of the new government,” Mr. Lapid said on Monday. “Maybe that’s a good thing because we’ll have to overcome them together. That’s our first test.”

Can the Coalition Get Along?

The coalition being formed by Mr. Lapid, who leads the Yesh Atid party, and by Mr. Bennett, who leads Yamina, is set to include several disparate parties. They include the left-wing, secularist Meretz party, which has not been in government for 20 years, and New Hope, led by Gideon Saar, who split from Likud but continues to support a right-wing agenda.

Meretz, led by Nitzan Horowitz, opposes Jewish settlement in the occupied territories and supports the two-state solution to the Israeli-Palestinian conflict and the separation of religion and state. New Hope supports judicial reform, settlement expansion, eventual annexation of parts of the West Bank and opposition to any future Palestinian state alongside Israel.

But instead of trying to tackle these most divisive issues that have long polarized Israeli society, leaders of the so-called change coalition have indicated they would avoid them, at least for the first year.

Mr. Horowitz, of Meretz, said he believed there was “a basis for working together” by sticking to more practical, technocratic issues such as some of the country’s long-neglected infrastructure.

One of a new government’s first tasks would be to pass a belated state budget for 2021.

Many Israeli political analysts said the coalition’s main glue was the joint desire to remove Mr. Netanyahu and cautioned that once that had been achieved, it may not last long.

Is This an Opening for Arab Parties?

One of the most unlikely kingmakers involved in the makeup of this coalition is Mansour Abbas, the leader of the small Arab party known by its Hebrew acronym, Raam, with four seats in the current Parliament.

Although Raam is not likely to play a formal role in a Lapid-Bennett coalition, their government would rely on Raam’s support to pass a confidence vote and to be able to control the Parliament. Some Arab lawmakers played a similar role by supporting Yitzhak Rabin’s government from the outside in the 1990s.

Traditionally, Arab parties have not been directly involved in Israeli governments — they have been mostly shunned by other parties, and are leery of joining a government that oversees Israel’s occupation of the West Bank and its military actions.

But after decades of political marginalization, many Palestinian citizens, who make up a fifth of Israel’s population, have been seeking fuller integration.

Raam has been willing to work with both the pro- and anti-Netanyahu camps since the March election and to use its leverage to wrest concessions for the Arab public.

Amid the recent fighting in Gaza and the outbreak of Arab-Jewish violence in Israel, many analysts had predicted that it would be harder for Raam to play a pivotal role. But the party never ruled out a deal once calm was restored.

Where Would This Leave Netanyahu?

If the Lapid-Bennett coalition is installed, Mr. Netanyahu is likely to go back to being the leader of the opposition, a position he held before the 2009 election.

Standing trial on corruption charges, he would likely be denied any chance of making changes that would allow him some sort of parliamentary immunity. Mr. Netanyahu has denied wrongdoing and says the cases against him will collapse in court.

But his political future is in jeopardy. A majority against him in Parliament could pass legislation limiting the number of terms in office for a prime minister, or barring any candidate who has been charged with crimes from running for office.

Mr. Netanyahu, for his part, has made it clear that he intends to fight on.