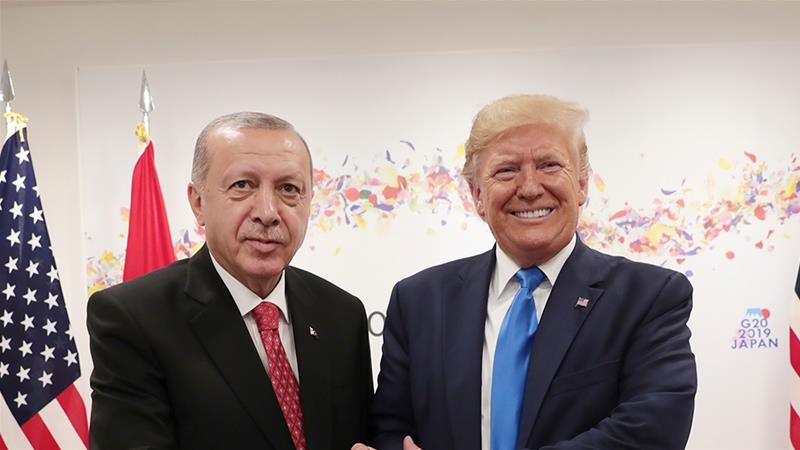 Washington, DC – When Turkish President Recep Tayyip Erdogan visits the White House on Wednesday, he will likely receive a relatively warm, but conflicted, reception from President Donald Trump, but a hostile one from members of the United States Congress.

The visit comes just a month after Turkey launched a military offensive against Kurdish YPG forces in northeast Syria.

YPG is viewed by Turkey as an offshoot of the armed Kurdistan Workers’ Party (PKK), considered by Ankara and several Western nations a “terrorist” organisation whose campaign for autonomy has killed tens of thousands over the past decades.

The operation came following an agreement between Erdogan and Trump, after which the US president announced he was withdrawing troops from the area.

The withdrawal angered US Democrats and Republicans who saw the move as an abandonment of the Kurds, who had been one of the US’s main allies in the fight against the Islamic State of Iraq and the Levant (ISIL or ISIS).

Sinan Ulgen, a Turkish analyst and former diplomat, said Erdogan would try to “convince Trump to fulfill its promises in Syria and abandon its relationship with the YPG”.

Ankara says the YPG has not withdrawn from all areas agreed upon in the US-Turkey deal signed last month. Erdogan also recently expressed his frustration over joint US-YPG patrols in northern Syria.

“Trump seems to be Turkey’s only friend in the US, as the Congress and some senior officials in the US administration have been taking actions or trying to take actions against Ankara,” Ulgen told Al Jazeera.

“Ankara did not expect such a harsh public and political reaction from the US, and from other Western allies, against its operation in Syria, particularly about an issue the government believes it is right,” he added.

Although the operation has since ended with the Kurdish YPG forced to withdraw from some of the Syria-Turkey border regions, analysts say the political backlash in the US continues to simmer, limiting the US president options when it comes to Turkey and putting into doubt the long-term future of the already fraught relationship between the two countries.

“This is one of the lowest points in the historical US-Turkey relationship,” said Fawaz Gerges, a professor of international relations at the London School of Economics.

“It’s no wonder why Russia’s [Vladimir] Putin has been establishing a close partnership with Erdogan at the cost of Turkey’s strategic membership in NATO,” Gerges told Al Jazeera, referring to Turkey’s dealings with Russia, including Ankara’s purchase of the Russian S-400 defence system and Moscow’s growing influence in Syria.

Aaron David Miller, a senior fellow at the Carnegie Endowment for International Peace, agreed, saying “the problem is that for decades [the US] loaded a whole lot freight on the relationship” with Turkey.

“With the end of the Cold War, the common interests which bound [the US and Turkey] together which were basically driven by the historic Turkish fear and American Cold War with the Russians, the former Soviet Union, came to an end,” Miller told Al Jazeera. “As a consequence of that ending, problems began to emerge which were much less easily managed.” 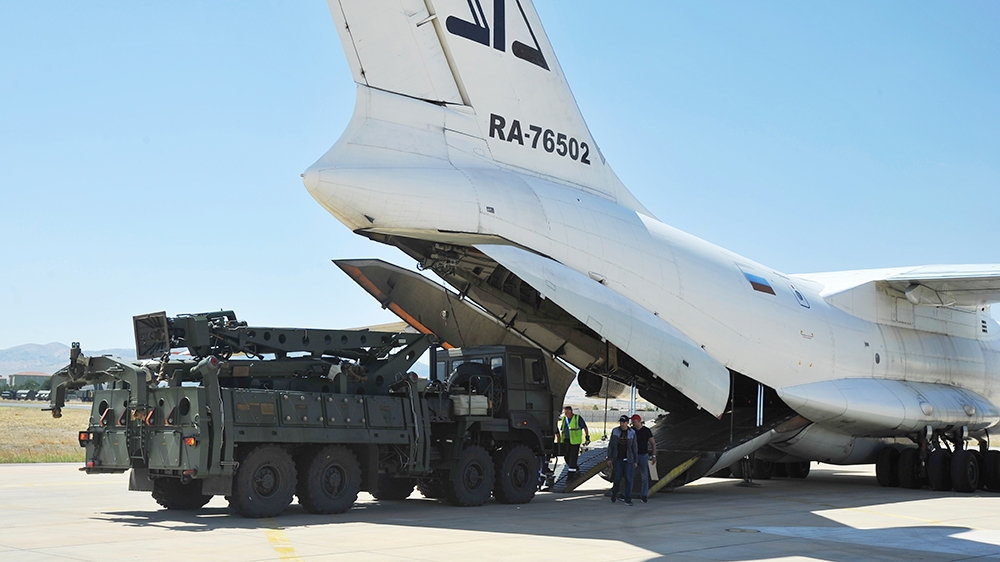 Today, a significant irritant in the US-Turkey relationship is Erdogan’s decision to buy S-400 missile defence systems from Russia. The US responded by suspending Turkey from the F-35 advanced fighter jet programme earlier this year, but has so far stopped short of implementing punishing sanctions over the move.

Senior Trump administration officials told reporters at the White House on Tuesday that the president is committed to direct engagement with Erdogan and “full and frank” discussions on Syria and the S-400 purchases. Trump plans to discuss Turkey’s purchase of the S-400 defence system from Russia, the officials said.

Robert O’Brien, the US president’s national security adviser, said on Sunday that Trump will warn Erdogan that Turkey could still face US economic sanctions over the S-400 purchases.

“Sanctions will pass Congress with an overwhelming bipartisan majority and Turkey will feel the impact of those sanctions,” O’Brien said, referring to penalties that could result as part of the America’s Adversaries Through Sanctions Act. “We’ve made that very clear to President Erdogan.”

On the eve of the launch of the Turkish military operation last month, Trump sent a letter to Erdogan urging restraint in Syria and saying “don’t be a fool” and threatening to destroy the Turkish economy. Erdogan reportedly threw the letter in the bin, calling it a breach of “diplomatic and political courtesy” and said he would “not forget this lack of respect”.

But the Turkish president added that despite the letter, “our reciprocal love and respect” would keep his relationship with Trump moving forward. 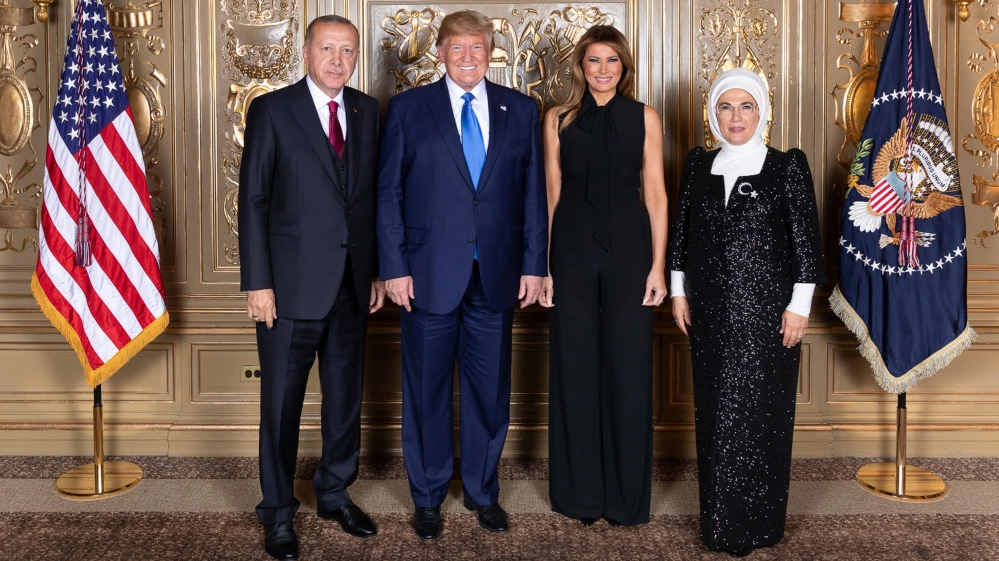 Trump for his part, while threatening to “obliterate” Turkey’s economy, has also repeatedly complimented Erdogan, calling him a “friend” and a “strong man”.

Erdogan’s goal on this visit to Washington, DC will be to convince Trump not to impose economic sanctions, an outcome that would bring domestic gains, Gerges said.

“Erdogan has shown many Turks that he could stand up to the US … and create a safe zone in northeast Syria in order to resettle Syrian refugees there,” Gerges told Al Jazeera. “He has shown his ability to strike a deal with Russia without incurring punishing sanctions by the Trump administration.”

But avoiding US sanctions may be tricky given what is already happening in the US Congress.

The House of Representatives has voted several times in recent weeks to rebuke Turkey following its military action in Syria.

Late last month, the House overwhelmingly approved economic sanctions that would trigger mandatory penalties on Ankara for the purchase of the S-400 systems and mandate a US investigation of Erdogan’s personal finances, among other steps.

At the same time, the House also adopted a resolution formally recognising the early 20th century killings of Armenians by Ottoman Turks as “genocide”, a label Turkey has vehemently rejected.

Republican leaders in the US Senate have withheld advancing similar legislation to give the White House room for diplomacy with Turkey. But, depending on what happens between Trump and Erdogan, an updated version of a sanctions bill is likely to move forward after the Turkish president departs the US, senators say. 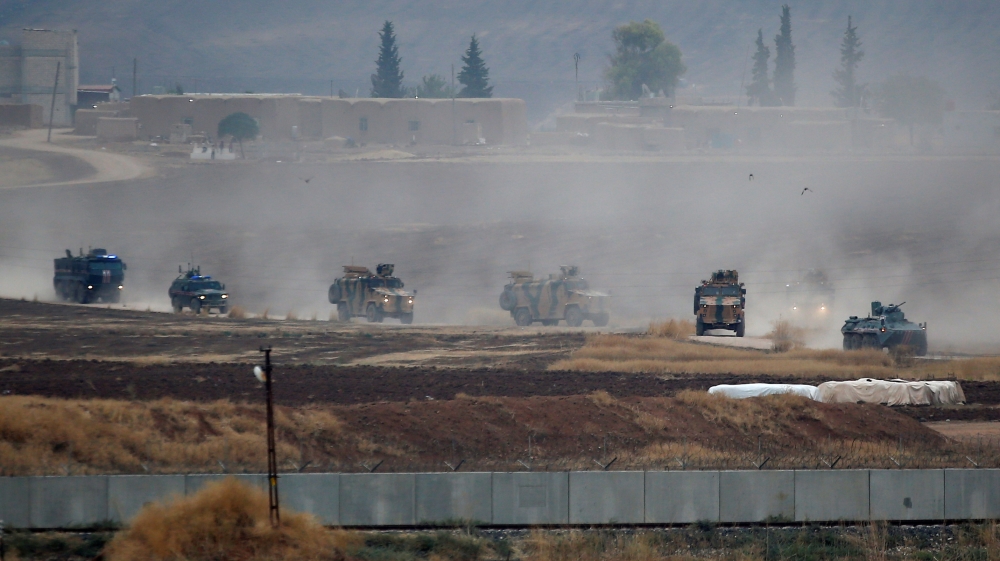 Democratic Senators Chris Murphy and Bob Menendez said they will seek to force a vote on a measure that would force the US State Department to detail the extent of Turkey’s alleged human rights abuses in northern Syria.

“Right now, there are not a lot of signals that the Trump administration is doing anything meaningful to try to crack down on what might be gross violations of human rights in northeast Syria,” Murphy told Al Jazeera.

“This meeting is going to be a foreign policy disaster for the United States just like virtually every single meeting the president has with a foreign leader,” Murphy said.

“We don’t have a Turkey policy. Turkey is going to do whatever they want. Trump is going to let them do it. And the only consequence is going to come through legislation passed by Congress,” he said.

Emblematic of the tone in the US capital, the chairman of the House Foreign Affairs Committee, Eliot Engel, organised a bipartisan letter signed by 17 House members to Trump on Monday urging the president to cancel the White House invitation to Erdogan.

“Domestically, President Erdogan has overseen a systematic rollback of democratic institutions in Turkey, concentrating all political power in his person, persecuting political opponents and peaceful protesters, and imprisoning journalists in shocking numbers,” the letter said.

The last time Erdogan visited Washington, DC to meet Trump in 2017, members of his security team engaged in a violent clash with pro-Kurdish protesters outside the Turkish ambassador’s residence. The incident was captured on video and replayed more than a million times on YouTube.

US police intervened and 15 Turkish security officers and four other men were later charged by federal authorities with felony crimes in the incident. Most of those charges have since been dropped because the men remain outside the US.