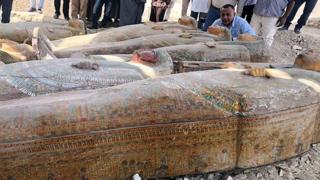 Archaeologists have found more than 20 ancient wooden coffins near the Egyptian city of Luxor, the country’s antiquities ministry says.

The coffins, whose brightly-coloured decorations are still visible, were uncovered at the Theban necropolis of Asasif, on the River Nile’s west bank.

They were in two layers, with the ones on top across those below.

The ministry described the discovery as “one of the largest and most important” in recent years.

More details will be released at a news conference on Saturday.

Most of the tombs at Asasif, which is close to the Valley of the Kings, are from the Late Period (664-332BC) of ancient Egypt.

However, there are also tombs from the earlier 18th Dynasty (1550-1292BC), which was the first of the New Kingdom and included the famous pharaohs Ahmose, Hatshepsut, Thutmose III, Amenhotep III, Akhenaton and Tutankhamun.

The area included “houses for storage and the cleaning of funerary furniture, with many potteries dated to the 18th Dynasty”, it said.