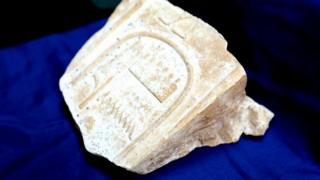 An ancient Egyptian artefact illegally smuggled out of the country has been returned after being displayed at an auction hall in London, officials say.

Steps were then taken to stop the sale and withdraw the listing, the ministry added in a Facebook post.

It is not clear how or when the relic, a cartouche of King Amenhotep I, was originally smuggled out of the country.

The archaeological item was earlier exhibited at the open museum of the ancient Temple of Karnak in the city of Luxor, the ministry’s director-general, Shaaban Abdel Gawad, said.

The antiquities ministry worked with the Egyptian foreign ministry, Egypt’s embassy in London and British authorities to recover the section of tablet, he said, adding that the embassy in London had received it last September.

Egypt has stepped up efforts to stop the trafficking of its antiquities in recent years.

The country has warned that it will not co-operate with foreign museums in relation to exhibits on ancient Egyptian sites unless smuggled artefacts are returned.

Earlier this month, it was announced that the only casing stone from the Great Pyramid of Giza to be displayed anywhere outside Egypt will be on show at the National Museum of Scotland in Edinburgh from 8 February.

The large block of fine white limestone will be on public view for the first time since it arrived in Scotland in 1872.