Archaeologists in Egypt have unearthed more than 100 delicately painted wooden coffins, some with mummies inside, and 40 funeral statues in the ancient burial ground of Saqqara, the Egyptian antiquities authorities said, calling the discovery the largest find at the site this year.

The sealed, wooden coffins, some containing mummies, date as far back as 2,500 years and are “in perfect condition of preservation,” Khaled el-Enany, the Egyptian minister of tourism and antiquities, told reporters in Saqqara on Saturday. The fine quality of the coffins meant that they were probably the final resting places for the wealthiest citizens, officials said.

Other artifacts discovered include funeral masks, canopic jars and amulets.

“This discovery is very important because it proves that Saqqara was the main burial of the 26th Dynasty,” Zahi Hawass, an Egyptologist, told the magazine Egypt Today, referring to the rulers from about the mid 600s B.C. to 525 B.C. It would also enrich existing knowledge about mummifications in that period, he added.

The artifacts and coffins will eventually be exhibited at several museums in Egypt, including the Grand Egyptian Museum, a sprawling archaeological center under construction near the Giza Pyramids that is expected to open next year.

Saqqara, a city about 20 miles south of Cairo, is a vast necropolis for the Old Kingdom capital of Memphis, and it has long been the source of major archaeological finds. Made a UNESCO world heritage site in the 1970s, the necropolis holds more than a dozen burial sites, including the Step Pyramid of King Djoser, the first known burial pyramid.

In a dramatic flourish at the news conference on Saturday, experts opened a coffin and scanned a mummy with an X-ray, determining it was most likely a man around the age of 40.

The discovery announced on Saturday is the most recent in a series of historical finds at the site. Officials said in October that they had found 59 intact coffins. 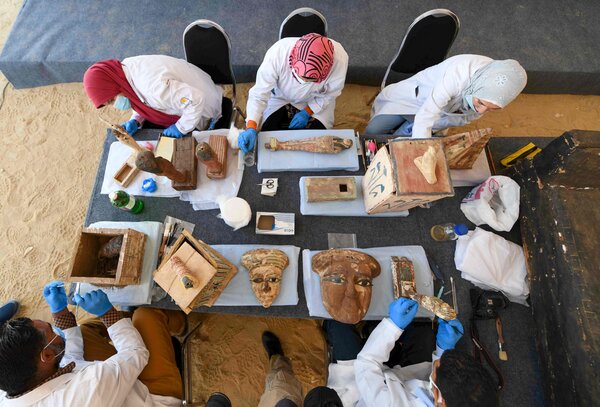 More discoveries are predicted at the site, with archaeologists expecting to find in 2021 an ancient workshop that prepared bodies for mummification.

The latest discovery comes as Egypt is making a concerted effort to draw visitors back to the country, which depends heavily on tourism. Political problems, including a 2011 uprising that toppled the longtime leader Hosni Mubarak, coupled with terrorist attacks and other instability have deterred tourists, and the coronavirus pandemic has dealt another blow.

According to a Times database, Egypt has reported 110,547 total virus cases, with an average of 226 new infections per day over the last week. The country reopened its borders to visitors in July.