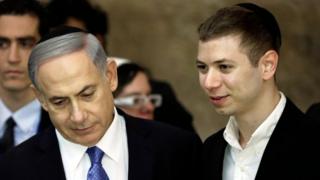 A son of Israeli PM Benjamin Netanyahu says Facebook blocked him for 24 hours amid a spat over several posts railing against Palestinians and Muslims.

Last week, Facebook removed a post by Yair Netanyahu in which he called for “avenging the deaths” of two Israeli soldiers killed by a Palestinian.

A post in which the 27-year-old said he would prefer if “all Muslims leave the land of Israel” was also taken down.

He called Facebook “thought police”. But it accused him of hate speech.

Mr Netanyahu drew widespread criticism last year after he posted a meme mocking some of his father’s critics, including billionaire financier George Soros, which the Anti-Defamation League said was anti-Semitic.

He also faced a public backlash over his reported failure to pick up his dog’s poo.

On Sunday, Mr Netanyahu took to Twitter to express his anger at his 24-hour ban from Facebook, calling the move “unbelievable”.

His tweet included a screenshot of a deleted Facebook post that criticised the site for taking down his call to avenge the deaths of the soldiers who were shot and killed in the occupied West Bank on Thursday.

In it he warned that “there will never be peace with those monsters in the form of men that have called themselves ‘Palestinians’ since 1964” [the founding date of the Palestine Liberation Organisation (PLO)].

“Hamas, Hezbollah and the Iranian regime have official pages on Facebook. There are also endless pages calling for the destruction of Israel and the murder of Jews. Thousands of violent and extreme left-wing posts against me and my family, including threats of physical violence and immoral murder threats.

“All of these do not violate Facebook’s community rules.”

“Due to that, this content was removed from our platform as we would do for anyone posting similar content about any protected characteristic.

“Following this, Yair Netanyahu decided to share a screenshot of a removed post and called people to share it – which is the same as writing the hate speech all over again.”

“In addition, we want to emphasise that we never remove posts for criticising the company and the claim that we are censoring criticism of the company on the platform is plainly untrue.”