JERUSALEM — Naftali Bennett, the leader of a hard-right political party, stood before television cameras and pledged never to share power with Yair Lapid, a centrist, and Mansour Abbas, an Islamist. It was March 22, the day before Israel’s fourth election in two years.

Yet late Wednesday night, just 72 days later, there was Mr. Bennett, sitting down beside both Mr. Abbas and Mr. Lapid and signing a deal that, pending a confidence vote in Parliament later this month, would see all three unite in the first government since 2009 that won’t be led by Prime Minister Benjamin Netanyahu.

Through three consecutive elections between April 2019 and March 2020, Mr. Netanyahu had kept them all at bay. He may have failed to win an overall majority himself, but he clung to power by exacerbating divisions within Israel’s ideologically diffuse opposition, ensuring that they, too, would fail to build a majority coalition.

The question of what changed since a fourth inconclusive election in March — and why — has several answers, both systemic and circumstantial.

Mr. Lapid’s dexterity in constructing a somewhat gravity defying coalition has certainly been a factor. But Mr. Netanyahu himself played a crucial role — reversing years of unrepentant and divisive policies toward Israel’s Arab minority by suddenly bestowing legitimacy this year on Arab politicians like Mr. Abbas, who have long been considered fifth columnists by much of the Israeli right. 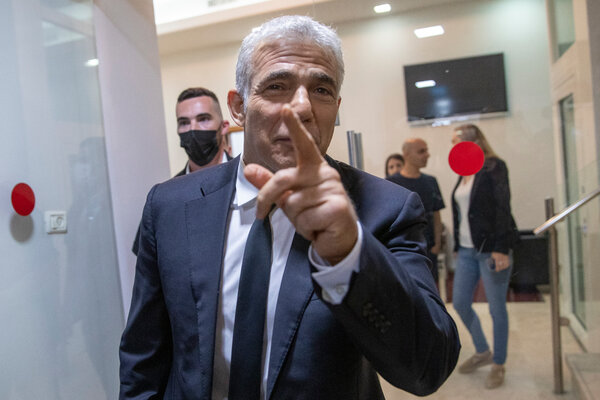 The reasons are also rooted in a combination of personal and political judgments by nationalist power brokers like Mr. Bennett. Even if Mr. Bennett had stuck by Mr. Netanyahu, his support would not have been enough to give Mr. Netanyahu a majority. That meant that Mr. Bennett was left with either joining the opposition or sending Israel to a fifth election in little more than two years — a vote that some analysts predict would deal a serious blow to his party.

Hard-right parties have also been tempted by the prospect of senior positions within a new government; Mr. Bennett will be the prime minister, despite leading a party with only seven seats in the 120-seat Parliament.

“There is a mix of national duty, and also political and sometimes personal considerations,” said Dani Dayan, a former Israeli ambassador who ran unsuccessfully in the election for New Hope, a hard-right party led by former allies of Mr. Netanyahu, that is part of the new coalition. “You know, politics is not always free of cynical considerations.”

But right-wing leaders have also made patriotic arguments for finally replacing Mr. Netanyahu. In the face of sustained intimidation and anger from their base, they have said that they have a responsibility to work with their ideological opposites in order to wrest Israel from a cycle of endless elections and entropy. The country has suffered in a limbo that has left Israelis without a state budget for almost two years, and with several crucial civil service positions unfilled.

Sitting in her office in Parliament this week, Idit Silman, a lawmaker from Mr. Bennett’s party, flicked through hundreds of recent text messages from unknown numbers.

Some were laced with abusive language. Some warned she was going to hell. All of them demanded that her party abandon the coalition, accusing her of giving up her ideals by allying with leftists, centrists and Islamists to oust Mr. Netanyahu.

And it has not just come by phone.

When Ms. Silman turned up at her local synagogue recently, she found several professionally designed posters outside, each with her portrait overlaid with the slogan: “Idit Silman stitched together a government with terror supporters.”

For days, protesters have also picketed her home, shouted abuse at her children and trailed her by car in a menacing fashion, she said.

On a personal level, it would be easier to pull out of the coalition, Ms. Silman said. But she felt it was patriotic to remain within it.

“I’m sure that we are doing something that is very important for our country,” she said.

The level of aggression directed at Ms. Silman and her allies on the right highlighted how Mr. Netanyahu has very much not given up hope of remaining in office, and could still ward off this challenge to his leadership.

Part of the anger is organic. But part of it has been encouraged by Mr. Netanyahu and members of the Likud party themselves. On Thursday, Likud tweeted the home address of Ayelet Shaked, a leading member of Mr. Bennett’s party, Yamina, and encouraged its supporters to protest outside.

Likud members themselves acknowledge that the aim is to persuade enough members of the coalition to abandon it before the confidence vote in Parliament.

“Behind the scenes,” said a senior Likud official, speaking on the condition of anonymity, “the Likud party is ramping up the pressure, particularly on the weakest links.”

The pressure was already taking hold on Thursday, as an official from the Yamina party said that one of its seven lawmakers, Nir Orbach, had asked for his signature to be removed from the list of those seeking to replace the speaker of Parliament, a Likud member, with a member of the new coalition. That decision could allow the speaker, Yariv Levin, to remain in his position, which will allow Likud to control parliamentary proceedings throughout the crucial next week, and potentially delay the confidence vote on the new government until Monday, June 14.

Once the opposition’s full agreements are disclosed publicly, Likud will also create another obstacle by subjecting them to legal scrutiny and potentially to legal challenge, said Miki Zohar, chairman of the Likud parliamentary faction.

Few in the hard-right might have countenanced working with leftist, centrist and Islamist lawmakers without the diplomacy of Mr. Lapid, the linchpin of the coalition negotiations.

While Mr. Bennett will be the formal leader of the coalition, it could not have been formed without Mr. Lapid, who has spent months cajoling its various incompatible components toward an alliance.