SDEROT, Israel — It was 1:30 p.m. on Friday in Sderot, and Ido Avigal, 5, was being laid to rest a few miles to the north. He had been killed in what officials termed a freak incident two days earlier when a rocket from Gaza made a direct hit on the building next door to his aunt’s apartment, where he was visiting with his mother and older sister.

When that rocket struck on Wednesday evening, he was sheltering in a fortified safe room meant to protect residents from this exact threat. But a piece of shrapnel managed to puncture the thick, steel shutter and the thick glass window of the shelter, mortally wounding the boy. Ido’s mother and his sister were also injured while inside the room.

It was the first such case of a death in a fortified safe room that military officials could recall.

“So should we not trust the safe room now?” asked Andrei Mardachayev, 38, who lives in a building about 250 yards away and had come to view the damage with his wife, Irit, and their three young children.

“No, no, don’t say that,” Ms. Mardachayev said, aware that the children were listening. “We still have to go in it when the siren goes off.”

In the current round of fighting, which began on Monday, Gaza militant groups have fired at least 2,000 rockets into Israel, with more than 600 aimed at Sderot, the Israeli military said. Israel has pummeled Gaza with hundreds of airstrikes and artillery fire.

In the early 1990s, after Israel came under attack by Scud missiles from Iraq, all newly built homes were required to be constructed with a safe room made from reinforced concrete. Built to technical specifications that have been upgraded over the years, the protective spaces are supposed to withstand blast and shrapnel from conventional weapons, as well as offer some protection against chemical and biological attacks. These rooms include windows since they also serve as a functional part of the home.

In an added layer of security, Israel developed the Iron Dome antimissile defense system to intercept rockets directed at populated areas. This, combined with incoming rocket alerts that people receive on their phones, has minimized civilian casualties during rocket attacks. 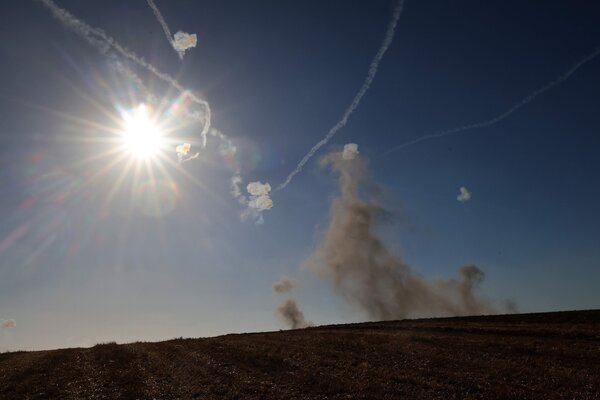 Lt. Col. Moty Dayan, deputy chief of the southern district of the Home Front Command, the Israeli military’s civil defense department, said that safe rooms have saved many lives, adding that others on Mishol Struma Street had emerged “without a scratch.”

An initial investigation found that the safe room where Ido was hiding had been built to the proper specifications, according to Colonel Dayan. The penetration by the shrapnel was probably caused by the angle at which the rocket hit, he said, adding that the only new recommendation for now was to sit low down in safe rooms, below the window line.

The apartment building where Ido’s family was staying was built around 2015. The modern, airy accommodations have open-plan living areas and balconies. A safe room in each unit doubles as a bedroom.

When the siren went off on Wednesday evening, Eli and Gitit Botera rushed into the safe room of their sixth-floor apartment with their infant daughter, Adele. The room, which serves as Adele’s bedroom, includes another bed and some Jewish prayers stuck on the walls.

Seconds later, a rocket slammed into the fifth floor, creating a gaping hole in the building’s front and starting a fire that destroyed the apartment below. Luckily, that family was not home. But shrapnel blasted everywhere, including into the safe room where Ido and others hid in the building next door.

When the Boteras opened the door of their safe room, their apartment was filled with smoke. They took the stairs down.

On Friday, they had a small suitcase packed. They were going to a hotel in Tel Aviv to decompress for a few days.

The afternoon was punctuated by dull thuds from Gaza and occasional sharp booms in the blue skies above. Sderot, a town that has endured 20 years of rocket attacks, is so close to Gaza that sometimes rockets fall here or are intercepted by the Iron Dome before the siren sounds.

Meir Manor, 63, had moved to the cul-de-sac where Ido was killed three years ago from a rural village, “to show solidarity with the people here,” he said.

He said it was important that people stay and show a presence.

“If everyone runs away, we might as well close up the country and leave,” he said. “We have to be brave and strong.”

At Ido’s funeral on Friday, his father, Asaf Avigal, eulogized him. Ido’s mother, who was badly wounded in the attack, was still in the hospital.

“I’m sorry I did not take the shrapnel in your place,” Mr. Avigal said, according to Israel’s N12 news channel. “A few days ago, you asked me: ‘Dad, what will happen if the siren goes off while we are outdoors?’ I told you that so long as you were with me you would be protected. I lied.”

During the funeral, which took place in Kiryat Gat, 18 miles away, another incoming rocket siren pierced the air. The mourners, exposed and vulnerable, protected themselves as best they could by lying down on the ground.