CAIRO — They smuggle the parts or make their own, aided with know-how from Iran. They repurpose plumbing pipes scavenged from abandoned Israeli settlements and components culled from dud Israeli bombs. They assemble the rockets underground or in dense neighborhoods that the Israelis are reluctant to strike.

Despite Israel’s vaunted surveillance capability and overwhelming military firepower next door, Palestinian militants in Gaza have managed to amass a large arsenal of rockets with enhanced range in the 16 years since Israel vacated the coastal enclave it had occupied after the 1967 war.

Hamas, the militant group that has run Gaza since 2007 and does not recognize Israel’s right to exist, has parlayed the arsenal into an increasingly lethal threat, as seen in the most recent upsurge of hostilities with the Israeli military. By Thursday, Israeli officials said, the militants had fired about 1,800 rockets.

The arsenal pales in comparison to the vast destructive powers of Israel’s air force. But to Israelis, the rockets are the tools of what their country and many others including the United States regard as a terrorist organization, embedded among the nearly two million Palestinian inhabitants of Gaza.

To many Palestinians, the rockets symbolize their rightful resistance to Israeli dominance and occupation.

How many rockets have been amassed by Hamas and its allies?

Israeli intelligence has estimated that Hamas, Islamic Jihad and other Palestinian militant groups have about 30,000 rockets and mortar projectiles stashed in Gaza. The rockets are of widely varying ranges and lack guidance systems, but the militants have been able to improve their accuracy. 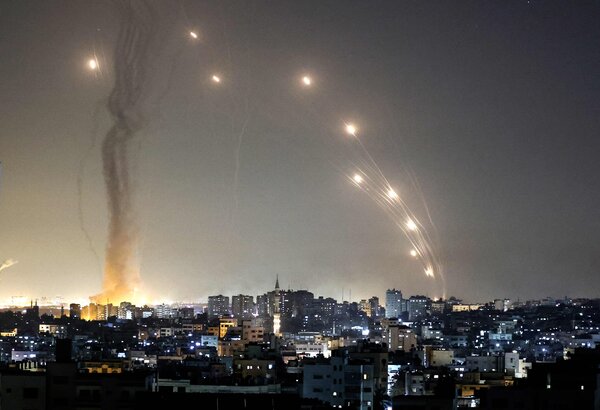 What is new about the latest volleys launched from Gaza?

The number of rockets fired each day in the most recent spate of hostilities is unprecedented. And while the majority of the rockets appear to be aimed at population centers across southern and central Israel, longer-range rockets were launched at Tel Aviv and Jerusalem. This is a sign, experts say, that Hamas has not only managed to replenish its arsenal but has improved its capabilities.

Some Israeli commanders have expressed surprise at both the intensity and range of the Gaza rockets.

An analysis by Michael Armstrong, an associate professor of operations research at Brock University in Canada, found a significant increase in the rate of fire. Using numbers from the Israel Defense Forces, Mr. Armstrong, who studies these weapons, cited 470 rockets fired from Gaza during the first 24 hours of the most recent escalation compared to a peak of 192 rockets per day in 2014 and 312 in 2012.

Hamas, he says, also launched more long-range attacks with 130 rockets fired at Tel Aviv late Tuesday, representing close to 17 percent of all fired until that point. In 2014 that rate was at eight percent and in 2012 at less than one percent.

“We still don’t know if Hamas has more long range rockets, or if they are choosing to use their best stuff first,” Mr. Armstrong said.

Why can’t Israel’s military destroy all the rockets in flight?

Israel has successfully thwarted many of the rockets fired so far with its Iron Dome antimissile defense system, destroying them before they land. But an increasing number of the rockets have slammed into Israeli territory, some with deadly effect. Experts say the militants now know that the intensity of the barrages — and the multiple directions from which they launch — have exposed vulnerabilities in the Israeli defense.

“It seems they’re looking to overload or saturate Israel’s interceptive system, which can only handle a certain number of attacks at once.” Mr. Armstrong said.

What are the ranges of these rockets?

A sizable portion of the arsenal is believed to be short-range rockets, known as Qassams, named after the Hamas military wing, which have a range of roughly 10 kilometers and are more easily and cheaply produced than longer-range weapons. They have unpredictable trajectories and some land inside Gaza.

The arsenal’s medium-range rockets, based on Iranian and Russian design, can reach targets up to 25 miles, making Israeli targets as far as the Tel Aviv suburbs vulnerable. Versions of these weapons are believed to be produced inside Gaza.

The longest-range rockets can travel much farther and can hit Tel Aviv, Jerusalem and Ben-Gurion Airport. They include the M-75, a locally made rocket with technology supplied by Iran, and the J-80, a locally made rocket named after a famous Hamas military commander, Ahmed al-Jabari, killed by an Israeli airstrike in 2012. The numbers refer to their estimated ranges in kilometers.

On Thursday, Hamas claimed in a statement that it has a missile with a range of 250 kilometers, about 155 miles, that can hit anywhere in Israel.

How have Gaza militants preserved or even grown their arsenal?

In the past, medium- and longer-range rockets were typically smuggled through tunnels along Gaza’s southern border with Egypt, and in some cases smuggled in parts, then assembled in Gaza. But in recent years, with Egypt making a more concerted effort to block and destroy the tunnels, smuggling whole rockets has become far more problematic. So Hamas and its affiliates in Gaza have developed their own production skills.

Michael Herzog, an Israel-based international fellow at The Washington Institute for Near East Policy and a retired brigadier general in the Israel Defense Forces, said Israeli military and intelligence officials are now far more concerned about the abilities of the militants to produce rockets they once had to import.

“The focus of I.D.F. targeting now is on the production facilities so that when this round of fighting ends, there will not only be less rockets but also less production capabilities for making them,” Mr. Herzog said.

Who has helped Hamas and its allies achieve this capability?

The Gaza militants have openly attributed their success to help supplied by Iran, which Israel regards as its most potent foreign adversary. Iranian officials, too, are not shy about their relationship with Hamas.

Speaking to a large gathering in May 2019, the leader of Hamas in Gaza, Yahya Sinwar, could not have been more explicit in acknowledging Iran’s critical role in assisting Hamas.

“If it wasn’t for Iran’s support,” he said, “we would not have had these capabilities.”

Along with providing smuggled weapons and equipment, Iran has been focused on training to help Hamas upgrade local production, extend the range of rockets and improve their accuracy, according to both Palestinian and Israeli officials and experts.

“It is a huge improvement going from firing one or two rockets at a time to launching 130 rockets in five minutes.” said Rami Abu Zubaydah, a Gaza-based military expert, referring to the frequency of fire seen in the past few days.

“Most weapons are now manufactured in Gaza, using technical expertise from Iran,” he said.

How else have Gaza’s rocket makers skirted the blockade?

While still having to rely on smuggling parts and raw materials, Hamas leaders say the group has engineered creative workarounds to overcome tighter border controls and surveillance.

A 50-minute documentary broadcast by the Qatari-owned television channel Al Jazeera in September showed rare scenes of Hamas militants recovering dozens of Israeli missiles that had not detonated in previous strikes on Gaza.

They brought the remnants into what looked like a hidden manufacturing facility, carefully extracted the explosives packed inside and recycled some of the parts. The same documentary also showed militants digging up old water pipes from where Israeli settlements used to sit and repurposing the empty cylinders in the production of new rockets.

Referring to the repurposed plumbing pipes, while speaking in another gathering in 2019, Mr. Sinwar said, “There is enough there to manufacture rockets for the coming 10 years.”