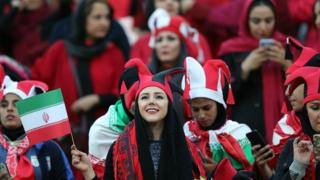 The move is being seen as a possible end to more than 35 years of exclusion of women from top matches.

Most were said to be relatives of players or members of women’s teams. The match is between local team Persepolis and Japan’s Kashima Antlers.

Football’s world governing body Fifa is working with Iran to end the ban.

Last month about 100 women were allowed to watch a friendly between Iran and Bolivia, but restrictions were quickly reinstated.

In March this year 35 women were detained for trying to attend a match between Persepolis and fellow Tehran team Esteqlal.

Fifa’s president, Gianni Infantino, was also in attendance at that match, along with Iranian Sport Minister Masoud Soltanifar.

Iranian women and girls have rarely been allowed at men’s sporting events since the 1979 Islamic Revolution, and have not been able to attend top football matches since 1981.

Female fans from other countries have, however, been allowed to attend some games.

Open Stadiums, a group which campaigns for access to venues for women in Iran, handed a petition to Fifa this week signed by more than 200,000 people, Reuters news agency reported.

Ending the exclusion “has been our dream for decades”, a spokesperson for the group told the agency. “We are also excluded from public happiness and excitement.”