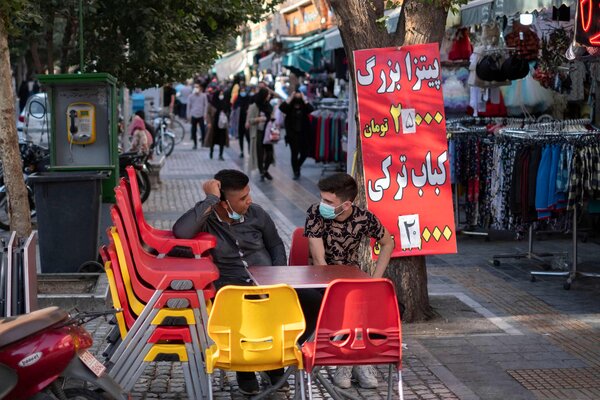 President Hassan Rouhani of Iran on Saturday warned that the country could see a fifth wave of coronavirus infections as the highly contagious Delta variant spreads.

“There are concerns that the whole country may enter a fifth wave if enough care is not taken in following health protocols,” Mr. Rouhani said in remarks broadcast on state TV. “The Delta variant entered the country from the south and southeast, and we should have been careful to prevent its spread in the country.”

Iran borders Afghanistan and Pakistan, which have had recent outbreaks.

Over the past two weeks, average daily reports of new cases in Iran have risen by 21 percent, according to a New York Times database. Since the pandemic began, the country has reported more than 3.2 million cases and more than 84,000 deaths.

During a meeting with members of Iran’s coronavirus task force on Thursday, Mr. Rouhani said that people needed to fully observing safety protocols “so that we do not have to impose severe restrictions again.”

Alireza Raeesi, a spokesman for the task force, said on Saturday that officials estimate fewer than 70 percent of Iranians are currently adhering to health and safety rules aimed at curbing the virus.

In April, the country, facing a fourth wave, imposed a lockdown in some areas.

Early in the pandemic, Iran scrambled to control one of the worst outbreaks in the world after officials played down the severity of the virus. A power struggle also complicated the country’s pandemic response.

The country’s lagging vaccination campaign has not helped. Only about 2 percent of the population has been fully vaccinated, according to data compiled from government sources by the Our World in Data project at the University of Oxford. Iran has administered about 5.7 million coronavirus vaccines, accounting for about 5 percent of the population, according to a New York Times tracker.

Mr. Rouhani addressed Iran’s vaccine shortage on Thursday, saying that it would be eliminated by importing foreign vaccines and the use of domestically-produced vaccines. Among imported vaccines, Iran had received more than 2.1 million AstraZeneca vaccines by May through Covax, the global vaccine-sharing program.

Officials on Thursday said they expected the country’s vaccine distribution effort to expand in the coming weeks.

At the same time the president said that being fully vaccinated was not an excuse for not skirting Covid mitigation measures, that Iranians should postpone travel, and that “foreign nationals who are infected with this virus” should not enter Iran.