BAGHDAD — ‘Who killed me?’ the signs asked, alongside images of dead men and women, among the roughly 80 Iraqi activists murdered since late 2019. Young demonstrators held aloft the posters in Baghdad’s Tahrir Square on Tuesday, illustrating both the enduring spark and diminished strength of Iraq’s anti-government protest movement.

The demonstrators (publicly) and Iraqi officials (privately) say they know who killed many of the activists: Iran-backed militias that have essentially crushed a grass-roots anti-corruption movement that blames Iranian influence, and the militias, for many of Iraq’s ills. In a country where militias — nominally a part of the security apparatus — operate with impunity, the killers have gone unpunished.

The several thousand young men gathered in Baghdad’s central square Tuesday comprised the biggest protest in the Iraqi capital since the anniversary last October of demonstrations in 2019 that swept Baghdad and southern cities and brought down a government. The movement is driven by anger at the government’s failure to make promised reforms, including curbs on Iranian-backed militias.

But in the shadow of assassinations, kidnappings and intimidation of people who criticize the Iraqi government and Iranian interference, turnout on Tuesday was far smaller than organizers had hoped.

At least two protesters were killed in clashes with riot police. An Iraqi security commander, who asked not to be identified because he was not authorized to speak on the issue, said they were believed to have been shot by security forces. Several other protesters were injured. 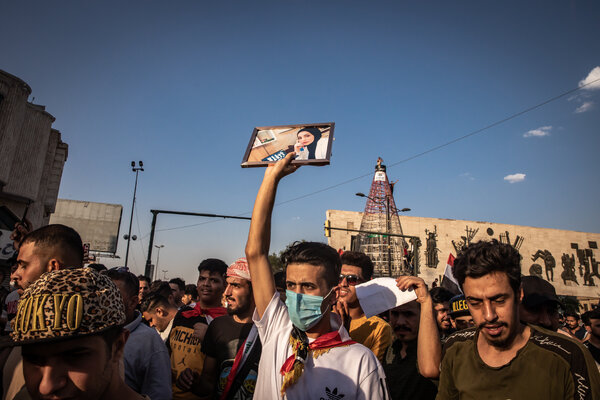 The demonstration began peacefully, with busloads of young men who had come from the south joining local demonstrators, waving posters and Iraqi flags and chanting as they circled the square. Mylar balloons with the Iraqi flag floated above.

Near sunset, hundreds of riot police surged forward to keep protesters away from a bridge leading to the Green Zone, where government buildings and foreign embassies are clustered. A few of the protesters responded by throwing rocks as police chased demonstrators down alleys. Security forces said the demonstrators later set fire to security vehicles.

“We expected more people to come but some people are afraid — afraid for their jobs and afraid for themselves,” said one of the longtime activists, Dr. Mohammad Fadhil, a physician from Diyala province, speaking before the clashes erupted.

Another protester, Hani Mohammad, said he had been threatened by a group of fighters three days before.

“They came to my house,” said Mr. Mohammad, naming one of the biggest Iran-backed militias, which he did not want to name publicly for fear of retaliation. He said he had already fled.

A year after taking power, prime minister Mustafa al-Kadhimi has largely failed to deliver reforms he promised in response to the 2019 protests, including reining in Iran-backed militias, which are also blamed for attacks on the U.S. embassy and military installations.

Activists who have been killed include protest leaders in the holy city of Karbala, a female doctor in Basra, and a prominent Baghdad security analyst, Hisham al Hashimi, who advised the prime minister. Many of them were shot dead in the streets in view of security cameras or the police, some in the middle of the day.

Though at least one commander has been relieved of duty, no one is known to have been prosecuted.

“What’s the main purpose of these killings? It’s to deter the formation of leadership among the protest movement,” said Randa Slim, a senior fellow at the Middle East Institute. “So you target key leaders that have the potential of rallying the masses, you eliminate them and then you create fear within the rest.”

She said there was little prospect that Iraqi political leaders would reform the system that elevated them to power, or push back against the pervasive influence of Iran, and that intimidation and lack of support had left the protest movement too weak to create change.

“You need leadership, you need organization, you need political machinery, you need funding for that,” said Ms. Slim, listing elements that the diverse movement lacks.

Ali al Bayati, a member of the Iraqi High Commission for Human Rights, said, “The security establishment is not serious in its efforts, beginning from the investigations within security institutions to bringing the case to the court.”

The United Nations envoy to Iraq, Jeanine Hennis-Plasschaert, told the U.N. Security Council this month that many of the protest leaders were being hunted down with ‘rampant impunity’ ahead of the early elections they had demanded.

In addition to those assassinated, more than 560 protesters, the vast majority of them unarmed, have been killed by security forces and gunmen during the protests themselves since 2019. Most were shot with live bullets or killed by tear gas canisters that became lethal projectiles after being fired directly into the crowd.

Ahead of Tuesday’s protest, one of the main Iran-backed militias, the Hezbollah Brigades, issued what many perceived as a veiled threat to the demonstrators, saying that it and other paramilitary forces “must protect these young men who are deceived,” so they cannot be used by enemies, including the United States. It accused the protesters of aiming to delay the elections planned for Oct. 10.

The assassinations have had a chilling effect on the political campaign. The grass-roots movement that began in 2019 aimed to end the corruption-ridden system of government in place since 2003, where government ministries have been carved up between powerful political blocs and militias.

Activists originally saw the upcoming elections as a chance for a fresh start with new faces, but now they appear likely to return the same factions to power.

“There are no parties with integrity that I can vote for,” said Hadeel, a 19-year-old university student protesting Tuesday in Baghdad’s Nasour square. She did not want to give her last name.

“After the election we will not be able to even protest because the government is going to be stronger than before and the militias will have even more power.”

Despite the danger, the protests Thursday could be a harbinger of a painful summer in Iraq.

The protests in 2019 spread from the southern coastal city of Basra, where citizens took to the streets to demand public services. Iraq last year recorded life-threatening record high temperatures of over 125 degrees, leaving many to swelter without electricity or even clean water.

This summer, a lack of winter rain, water mismanagement and water conflicts with neighboring Turkey and Iran are expected to result in even worse shortages for millions of Iraqis, misery that could fuel renewed mass protests.

Among the protesters Tuesday, there was little fear of the coronavirus ravaging Iraq, where only about 1 percent of the population has been vaccinated. No one in the demonstrations was seen wearing masks, and social distancing in the crowded squares was impossible.

“We know virus exists,” said one of the protesters, Hamza Khadham. “But the violence, injustice and oppression by the government against the people is more dangerous than the coronavirus.”