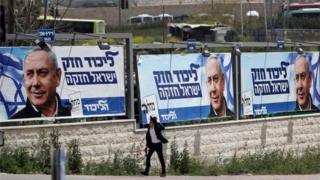 Benjamin Netanyahu has dominated Israeli politics for a decade.

His grip on power has been extraordinary, vacuuming up multiple government positions – at one stage a meeting between prime minister and ministers of defence, foreign affairs and health would have theoretically consisted of him talking to himself.

Supporters and opponents alike point to the leverage he has had over vast areas of life in Israel including business, security and parts of the media.

Not to mention how the US-educated articulate English speaker became the international face of Israel.

No wonder some people, using his nickname, call him “King” Bibi.

But on Wednesday night, the King sat ashen-faced in the centre of Israel’s parliamentary chamber as the hands of a wooden clock outside moved towards midnight; his sense of control ebbing away with every tick.

That was the deadline for him to get enough political parties to sign up to a record fifth governing coalition, which he would lead as prime minister.

On paper this was a straightforward task. When he celebrated victory in the elections last month, the right wing and religious parties – usual coalition allies with his Likud party – could tot up 65 seats, well over the number needed for a majority in the 120 seat Knesset.

But no coalition agreement was reached and his new government collapsed before it had even begun.

So what went wrong?

The headline issue concerns a fracture that runs deep in Israeli society, between the religiously conservative ultra-Orthodox Jewish community, which is growing in number, and secular Jews whose lifestyles often align more closely with those in many Western nations.

On one side was Avigdor Lieberman, leader of a secular nationalist party. He supports a new bill forcing quotas onto ultra-Orthodox young men to serve in the army.

On the other side the ultra-Orthodox parties, which would make up a sizeable chunk of the coalition, object to national conscription for religious reasons.

Mr Netanyahu needed both groups in his right-wing coalition. But they clashed. The ultra-Orthodox parties said they went as far as they could to accommodate the military draft law; Mr Lieberman said not far enough.

Ultimately the Israeli PM could not break the deadlock, leading to the collapse of coalition talks.

But beneath the row was a deeper political rivalry, and a sense among some observers that Mr Netanyahu’s crown was slipping.

The Israeli leader and Mr Lieberman, a former defence minister, are old allies-turned-adversaries on the right wing of Israeli politics.

Mr Netanyahu is facing corruption charges and his loyalists reportedly want coalition partners to agree to immunity from prosecution while he is in office.

It has left him politically weakened, with a narrower range of options to choose from in building a coalition, and arguably more biddable to demands from potential partners.

His rivals, like Mr Lieberman, are likely to have sensed his growing political vulnerability.

They calculate that the Netanyahu era may soon be over, and are jockeying for position.

In addition the Israeli prime minister’s pitch to the electorate has been as the sole guarantor of Israel’s security.

He has tried to deflect international attention away from Israel’s occupation of the Palestinian territories, and to move the issue down the agenda domestically.

It has added to the sense that no realistic political solution to the conflict is on the horizon.

Mr Netanyahu’s right-wing coalition partners tend to judge him by his performance on defence.

Last year, Mr Lieberman resigned as defence minister, portraying the prime minister as ineffective in his handling of militants in Gaza.

And in this atmosphere, a new political force rose to prominence at the April election – a centrist party led by a former Chief of Staff Benny Gantz, who also tried to outflank Mr Netanyahu arguing for a more muscular approach.

In the next election Mr Lieberman thinks he can win 18 seats (up from his current five), selling himself as tougher on security and a bulwark against what he sees as religious fanaticism governing Israel.

The Likud party accused Mr Lieberman of trying to “eliminate” the prime minister with a “lust for power”.

As the left wing, Israeli Arab parties and the traditional “peace” camp decline in popularity, the second Israeli election in a year may again revolve around rhetoric over military prowess and national identity.

Mr Netanyahu will fiercely try to hold on to his crown.