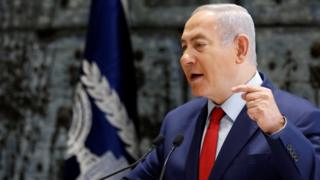 Israel is to hold a general election in April, the ruling coalition has said.

The political partners decided to call the poll after failing to resolve a dispute over a draft conscription bill for ultra-Orthodox Jews.

If PM Benjamin Netanyahu is returned to office he would be on course to become Israel’s longest serving leader.

However a question mark hangs over his political future, with the attorney general due to decide whether the PM should be charged with corruption.

Mr Netanyahu is being investigated on suspicion of committing fraud and bribery in three cases.

He has denied the accusations, accusing political opponents of carrying out a witch-hunt against him.

The ruling coalition was recently reduced to holding a one-seat majority in the Knesset (Israeli parliament) after the then-defence minister resigned in protest over what he said was a weak approach towards dealing with attacks from Gaza, the Palestinian enclave bordering Israel.

By Sunday night it was clear the government faced collapse after ultra-Orthodox parties threatened to withdraw over the draft conscription bill.

The bill concerns the long-controversial issue of conscripting ultra-Orthodox seminary students, who have traditionally been largely exempt from automatic military service.

Elections had to be held by November this year. If Mr Netanyahu manages to stay in office beyond 31 May 2019, he will surpass Israel’s first prime minister, David Ben Gurion, as the longest serving head of government.

However, reports say a former head of the Israeli Defense Forces (IDF), Benny Gantz, is preparing to contest new polls as head of an independent party, a scenario which could make an outcome more difficult to predict.

BRITAIN is set to bask in highs of 24C this weekend following days of wet and windy weather from Storm Edouard. Temperatures will reach mid…