JERUSALEM — A week before the annual Jewish pilgrimage to Mount Meron in northern Israel, officials from six government departments, hoping to prevent the spread of the coronavirus, agreed on a plan to limit attendance at the most popular parts of the site to just 3,000 pilgrims at a time.

But at the pilgrimage itself, shortly after midnight on Friday, one of those restricted areas was instead flooded by as many as 20,000 ultra-Orthodox Jews. And when many later tried to leave at the same time, 45 were crushed to death in a stampede.

The government’s plan — a copy of which was obtained by The New York Times — was never implemented because none of the government departments took responsibility for doing so, according to an official involved in the discussions, who spoke on condition of anonymity because the official was not allowed to speak publicly.

As a shellshocked Israel takes stock of what many have called its worst-ever peacetime disaster, details like this have become a recurrent motif. Time and again, across decades and governments, officials, ombudsmen, politicians and rabbis have tried to sound the alarm over safety issues at the site of the country’s largest annual religious festival — a mountainside warren of alleys, cramped plazas and ad hoc structures.

But each time, those warnings went unheeded. The lack of a clear hierarchy on the mountain and the reluctance of the state to tangle with the myriad religious groups that hold sway there — or to risk angering the powerful political parties that represent ultra-Orthodox interests — meant the efforts to bring order fell flat.

“It’s a place without law,” said Mordechai Halperin, a former mayor of the nearby village of Meron and a two-decade veteran of the local planning committee. “Everybody could do or build what they wanted.” 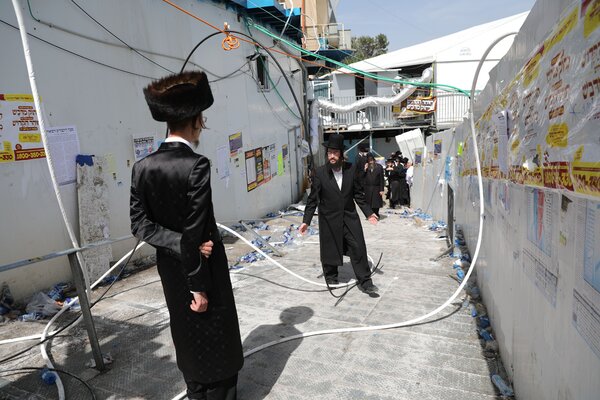 Revelations like this have prompted a national reckoning about why the Israeli leadership failed to take decisive action at such a prominent site — except among some Haredim, as the ultra-Orthodox are known in Hebrew, who viewed the tragedy as an act of God.

The burial site of a legendary Jewish mystic, Rabbi Shimon Bar Yochai, the mountain draws more than one million visitors each year. Several hundred thousand dance, sing and watch the late-night lighting of ceremonial bonfires on the anniversary of the rabbi’s death each spring, which falls on the Jewish festival of Lag b’Omer. The most recent observance began last Thursday night.

The fallout from the disaster has also heightened a debate about the level of informal autonomy granted to Israel’s ultra-Orthodox Jews, who form just 12 percent of the population but represent a growing political force. The Haredim are allowed to operate their own schools, avoid army service, and study religious texts full time, mostly with state support, instead of joining the work force.

During the coronavirus crisis, some Haredim drew the fury of many secular Israelis by publicly flouting state-enforced virus regulations, as state authorities often looked the other way.

The catastrophe at Meron has revived questions about whether successive governments — seven of the last nine have relied on the support of Haredi political parties — have been too timid in confronting Haredi interests. Another question is whether Haredi politicians have themselves been too resistant to state authority or intimidated by their constituencies in places like Mount Meron.

“Haredi politicians take care of the spiritual world of the Haredi community — our institutions and our education,” said Esti Shushan, a Haredi commentator and entrepreneur. “But health and security and all these material things, they cannot really handle. And that’s why the state has to forget the deals between them and the Haredi leadership and start to take care of us.”

For at least 13 years, politicians and watchdogs have tried to enforce tighter regulations on planning and crowd control, while some have proposed closing the venue altogether.

In 2008, the regional government leader tried to ban the mass gathering for safety reasons, and a state ombudsman warned it was a recipe for catastrophe. Eight years ago, a regional police chief said the site was too small to fit so many people.

And four years ago, Mr. Halperin, who was then the mayor, wrote to officials at the regional council about a new, illegal hostel that was blocking a key emergency exit from the same cramped area where the 20,000 celebrants gathered just after midnight last Friday.

But as ever, Mr. Halperin said, nothing was done, since officials from the regional and central government had no appetite to enforce planning regulations on such a contested site.

The result is that the mountainside has been turned into a scruffy, cramped and badly planned tangle of beige buildings and passageways, clustered around the stone monument housing the rabbi’s tomb.

Even the ramp on which 45 people died on Friday morning was built without permission, Mr. Halperin said.

“Anyone who looked at that slope could see it was something that was just thrown together,” he said. “The incline was too great, the metal floor was something you could easily slip on.”

“I tried to stop this,” he added. “I wrote letters. I got nothing.”

Part of the problem is the lack of a clear management system on the mountain. Four Haredi groups run different parts of the compound, but none has jurisdiction over the entire site. The group that oversees the area where the disaster occurred, Toldot Aharon, rejects the authority of the state, and the concept of Zionism, altogether.

Roni Sofer, a photojournalist who toured the Toldot Aharon site with fire and safety officials hours before the start of the festival, said the officials were horrified to find that Toldot Aharon had changed the location and size of the bonfire without consultation and in violation of previous agreements. Toldot Aharon could not be reached for comment.

Each group is represented on a five-person management committee, along with a government-appointed religious official, Rabbi Shmuel Rabinowitz, who nominally oversees all the holy sites in Israel.

But when Rabbi Rabinowitz tried, a decade ago, to exert some kind of order on the mountain, much as he has done at the Western Wall in Jerusalem, he received so much abuse that he resigned from the committee for several years and only recently returned to the role.

“Anything you did angered everyone,” Rabbi Rabinowitz said in an interview. “Everything you did to make things better brought with it complaints.”

Critics “complained that any renovation would change it into a tourist site,” he added, “despite the fact that synagogues are renovated all over the world.”

There is no clear chain of command on the mountain, several officials said. In addition to the regional government and the committee of religious groups, a department of the Ministry of Religious Services — the National Center for the Development of Holy Sites — nominally oversees site maintenance and the management of events on the mountain.

Government officials proposed that this year that the police should work with the center to limit crowd numbers at the bonfire ceremonies, according to the plan obtained by The Times. But that plan was never adopted.

In recent days, officials from the committee, the center and the police have each blamed other institutions. Asked for comment on the failure to implement the new plan, each department either declined to respond or said they were not responsible for crowd control.

When Shlomo Levy, then the leader of the regional council, attempted to cancel the festival in 2008, he said he was inundated with calls from cabinet ministers, lawmakers and local residents demanding he end his efforts.

“They called and said, ‘Why are you putting this hot potato on the agenda?’” Mr. Levy recalled in an interview. “It’s clear today that the management of the site is a mafia, there’s a lot of money and ego involved — everything except the fear of God.”

Haredi politicians reject the accusation that they use their leverage within governing coalitions to dampen attempts to bring order to Mount Meron. On the contrary, several say they have led calls to place it under a clear governing structure.

“We never told the government not to touch it,” said Yitzhak Pindrus, a lawmaker from United Torah Judaism, a Haredi party that forms part of the governing coalition. “We always said they should. The government has to take responsibility. It has nothing to do with coalition agreements.”

While much of the rest of the country was preoccupied with the glaring human and governmental failures that led to the disaster, many Haredim were not.

Beitar Illit, a sprawling, ultra-Orthodox settlement in the hills of the occupied West Bank just south of Jerusalem, lost four residents in the crush at Mount Meron. But many there refused to engage in the debate over human responsibility for the deaths.

“None of this concerns me at all,” said Yehuda Leib Schreiber, 33, a full-time Torah scholar and a father of seven. “It’s all dictated from above.”

The only proper response, he said, was “to repent.”

Beitar Illit’s victims included a father of 11, Rabbi Shimon Matlon, Elazar Goldberg, 37, Shmuel Zvi Klagsbald, 43, and a teenager, Shmuel Eliahu Cohen, 16. The names of the four flashed on an electronic advertising board at the entrance to the settlement.

Inside, the prevailing mood was one of collective mourning and quiet introspection. Residents said the tragedy was a divine message that called for soul-searching and self-improvement. Even when such messages were hard for mortals to understand, they said, who were they to ask questions?

“We believe the 45 were chosen by God to atone for the sins of this entire generation,” said Chavi Zaltsman, 25, a mother of two from the Hasidic Karlin sect. The sins could include idle gossip or disputes or hatred, she said, adding, “We need to love each other more, even if people are different.”

Some took comfort in the national day of mourning that the government had called on Sunday, though the more extreme ultra-Orthodox groups that do not recognize the state had no interest in state decrees.

“God came and took this boy and that man,” said Asher Suissa, 44, a caterer and friend of Rabbi Matlon’s. But he added that people were also involved, without apportioning blame.

He quoted a biblical verse from Deuteronomy, 4:15: “Take ye therefore good heed unto yourselves.”