The widening sense of mayhem in Israel and the Palestinian territories came as Israeli airstrikes brought mass evacuations and funerals to Gaza, and as Hamas rockets singed Israeli towns for a fifth consecutive day.

Hamas and Israeli officials signaled they were open to discussing a cease-fire amid global calls for peace and frantic diplomacy aimed at heading off a further fracturing in one of the Middle East’s most intractable struggles.

But the violence, which has metastasized with startling velocity compared with previous Israeli-Palestinian conflicts, was finding new footholds and threatening the veneer of Israeli society in ways not seen before.

By Friday evening, Israel faced furious demonstrations in at least 60 places across the West Bank and new protests just across the borders with Jordan and Lebanon, all atop the vigilante violence between Arabs and Jews within Israel, and the continuing battle with Gaza militants. 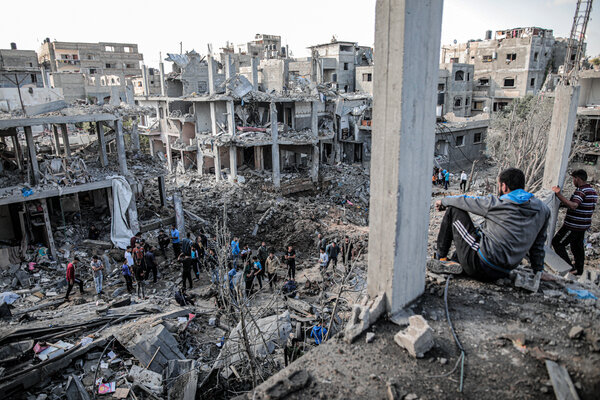 The Israeli military claimed to have significantly weakened Hamas in its latest offensive by killing dozens of high-ranking commanders and damaging the militant group’s network of tunnels under Gaza. It was unclear if such losses prompted a Hamas spokesman, Fawzi Barhoum, to tell Al Jazeera on Friday night that the group would consider negotiating a “calming” in the fighting if Israel complied with unspecified demands about “lifting its hand” from Gaza and the sites of clashes in Jerusalem.

As Gazans awaited what might come next, their misery was deepening. Power was down to five hours a day in some places, and water came out of the pipes only once every few days. Any efforts to contain what had been a worsening coronavirus infection crisis in Gaza all but collapsed in the teeming coastal strip.

But if Gaza’s immediate future was murky, the multiplying front lines of the conflict made it even harder to forecast what loomed for Israel, where the idea of coexistence between Arabs and Jews, never simple, seemed finally to be cracking.

Mob violence that killed and wounded dozens of people across Israel over the past few days — apartments and synagogues burned, stones thrown, Jewish vigilantes clashing with Arab rioters — has profoundly shaken the country. And it has resurfaced painful questions about whether years of victories for the Israeli far-right have crippled any chance of peaceful — if, as some Arabs would argue, not necessarily equal — coexistence.

About 800 people have been arrested across Israel over the past week, about 80 percent of them Arabs.

A Jewish woman told Kan Radio, the Israeli public broadcaster, that a group of Arab Israelis had hurled a homemade bomb at her, two friends and her baby in the mixed city of Lod, midway between Tel Aviv and Jerusalem, though they missed.

A “war room” of Jewish volunteers, some armed, formed in Lod a day after fiery street clashes broke out there, further destabilizing one of the few remaining places in Israel where Arabs and Jews share not only neighborhoods but buildings. On Friday night, clashes broke out in Lod between Arabs and Israeli police at a mosque.

And the bullhorns of war kept drowning out pleas for peace.

“They attacked our capital. They fired missiles on our cities. They are paying and will continue to pay a high price for that,” Prime Minister Benjamin Netanyahu of Israel said of Hamas disciples in a video statement on Friday afternoon.

Speaking later from Lod, where a community center was burned Friday evening despite the imposition of a curfew for the third night in a row, Mr. Netanyahu also condemned Arab attacks against Jews, and appeared to authorize retaliation by Jews as self-defense.

“This is certainly not all of the Arab public, this is even not most of the Arab public, but this is a significant minority that is carrying out violent attacks and is also hurting the fabric of life we have built here over the years between Jews and Arabs. This has to end,” Mr. Netanyahu said, adding later, “People should not be afraid to do what they need to do in order to protect their own lives as well as the lives of peaceful citizens of Israel. We will do whatever it takes to restore quiet to Israeli towns.”

Mr. Netanyahu, whose career seemed threatened in recent weeks after a fourth indecisive election, oddly stood to benefit from the crisis, which has sidelined concerns about Israel’s political gridlock. The crisis also has given momentum to Hamas, the militant group in Gaza that does not recognize Israel’s legitimacy.

Hamas urged Palestinians in the West Bank to “set the ground ablaze under the feet of the occupation.”

“O you free heroes of the West Bank, blessed are your arms,” a spokesman for Hamas’s armed wing said. “We salute your revolution.”

In cities and villages across the West Bank, an accumulation of perceived injustices by Israel in recent weeks — the possible expulsion of families from the East Jerusalem neighborhood of Sheikh Jarrah, airstrikes on Gaza and police raids on the Al Aqsa Mosque compound in Jerusalem, the third-holiest site in Islam — led to an avalanche of protest on Friday.

At least 11 Palestinians in the West Bank died in clashes with Israeli security forces and more than 200 were injured, the Palestinian Health Ministry said, mostly from live rounds, including around 20 in serious condition. Witnesses said rubber bullets, tear gas and sound grenades were also used.

In interviews, Palestinian witnesses said some of the clashes had been provoked by settlers who burned Palestinian fields and businesses near Nablus, Bethlehem and Hebron. In other areas, protesters were taking part in planned demonstrations against the police raids on Al Aqsa.

At a hospital in Ramallah where his critically wounded brother was undergoing surgery to remove bullets fired by Israeli security forces, Mohammad Amira, 28, a factory worker from the village of Ni’lin, said he and other Ni’lin residents had emerged from Friday prayers at the local mosque at 1:30 p.m. to find that a group of about 25 Israeli settlers had set fire to a greengrocer and a butcher shop.

“‘Death to Arabs,’” they shouted in Arabic and Hebrew, Mr. Amira and other Ni’lin residents said, as they threw stones at villagers’ cars. “‘We don’t want you living next to us.’”

When the Palestinians moved to confront the settlers, they said, seven Israeli soldiers staffing the checkpoint at the entrance to the village started spraying tear-gas and shooting live ammunition. They were later joined by backup, the residents said, and clashes continued Friday night.

Several young men interviewed at the hospital said, like Jihad Khalil, 28, that they would “give up our lives, our wives’ lives, our families’ lives, our children’s lives for the Al Aqsa Mosque.”

But the protests were also a show of solidarity with other Palestinians who faced what they said was systematic mistreatment by the Israel occupation. “They are with us and we are with them,” Mr. Khalil said. “It’s very difficult for us to return to the way we were living before.”

The health ministry in Gaza said 122 people had died so far in Israeli airstrikes and shelling, 31 of them children, with 900 injured. The United Nations said 10,000 Gazans had left their homes to take shelter in schools, mosques and other places. In Israel, the hostilities have left seven civilians and one soldier dead.

Before the current crisis, Gazans already lived in what one United Nations human rights official called a “toxic slum” — a jagged strip of land blockaded indefinitely by Israel and Egypt, where roughly two million residents endured daily power outages of up to 16 hours and had running water only every other day.

Now, they are down to about five hours of electricity per day and half their usual water supply, according to an Israeli security official. The official, speaking on condition of anonymity because of briefing rules, said the shortages were partly because Israel had closed the border crossing through which most of Gaza’s fuel arrives, but also because Hamas rockets had damaged power lines. That claim could not be independently confirmed.

The official said the power lines to two Gaza sewage treatment plants were damaged or down, and the U.N.’s humanitarian aid coordination agency said a water desalination plant was not operational, cutting 250,000 residents off from water. About 150,000 people in Gaza City had limited access to water because the power cuts were affecting the piped supply, the agency added.

The lack of power was starting to affect hospitals, which were already at full capacity because of the pandemic, according to Gisha, a Gaza-focused advocacy group.

Many nations have called for a peaceful resolution to the conflict. American, Egyptian and Qatari officials have been trying to broker a cease-fire, with the United States deputy assistant secretary of state for Israel and Palestinian affairs, Hady Amr, landing in Tel Aviv on Friday.

The United States and other Western countries insisted that the rocket attacks from Gaza must stop and refrained from placing blame on Israel.

“Palestinians — including in Gaza — and Israelis equally deserve to live in dignity, safety and security,” President Biden said in a statement marking Eid al-Fitr, the Muslim holiday that concludes the holy month of Ramadan. “No family should have to fear for their safety within their own home or place of worship.”

Israel on Thursday activated 7,000 military reservists and canceled leaves for soldiers in combat units, adding to speculation about a possible invasion of Gaza like the one in 2014 that left more than 2,000 people dead. The Israeli military said early Friday morning that its ground forces had attacked Gaza, later clarifying that the troops were firing from within Israel, and that none had entered the territory.

Hamas’s rocket attacks continued on Friday, if at a slightly slower pace. The Israeli authorities said an 87-year-old woman had died on Thursday night while rushing to a safe room amid rocket fire, bringing the total dead in Israel to eight. That number includes a 5-year-old boy killed by shrapnel on Wednesday despite having sheltered in a safe room.

On Thursday, his family was mourning at his funeral when the scream of sirens warned that, once again, Hamas rockets were on the way.