JERUSALEM — Yair Lapid, the centrist leader of the Israeli opposition, was asked on Wednesday to try to form a coalition government after Prime Minister Benjamin Netanyahu failed to do so by a Tuesday deadline.

Mr. Netanyahu remains caretaker prime minister and if Mr. Lapid cannot cobble together a government, the country could face another election this summer, its fifth general election in a little more than two years.

Mr. Lapid has 28 days to persuade a majority of the 120-seat Parliament to support him after the president, Reuven Rivlin, gave him the mandate to begin coalition negotiations.

In the March election campaign, Mr. Lapid, 57, ran on a promise to preserve checks and balances, and to prevent Mr. Netanyahu from remaining in office at the head of a right-wing, religious alliance that seeks to curb the power of the judiciary.

Mr. Lapid’s entry to the spotlight is the latest twist in a two-year political stalemate that has seen Israelis trudge to the polls four times since 2019, each time electing a Parliament whose lawmakers are roughly evenly split between supporters and opponents of Mr. Netanyahu.

The impasse has left political leaders repeatedly unable to form a stable majority, a stalemate that has left the country without a national budget and with several key administrative positions in the civil service unfilled.

It has also forced leaders to search for ever more unlikely alliances.

To secure a coalition, Mr. Lapid has previously said he would be willing to share power with an ultranationalist rival, Naftali Bennett, a former settler leader who opposes Palestinian statehood and seeks to annex large parts of the occupied West Bank. The divisions and complexities of Israeli politics currently make it impossible for Mr. Lapid to win office without reaching a compromise with parts of the far right. 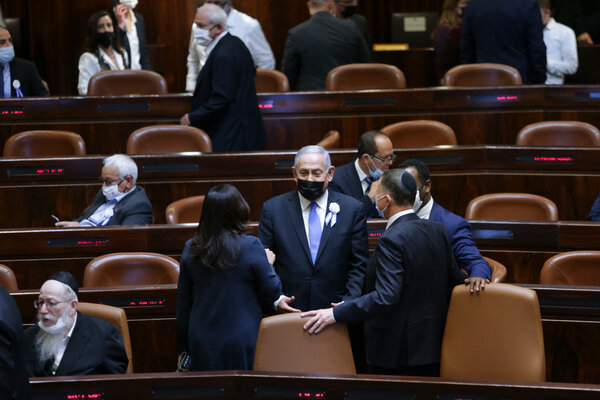 His party, Yesh Atid, which means “There Is A Future,” came second in the general election in March with 17 seats, behind Mr. Netanyahu’s right-wing party, Likud, with 30 seats.

Mr. Lapid will need to persuade an ideologically incoherent array of other opposition parties to set aside their differences to form an alliance of 61 lawmakers, the minimum for a parliamentary majority.

Mr. Lapid’s success will rest on their shared desire to oust Mr. Netanyahu, who is currently on trial for corruption — charges he denies. His critics consider the longstanding prime minister a threat to the rule of law.

Mr. Lapid is a charismatic former journalist and television host who turned to politics in 2012. He served as finance minister in a Netanyahu-led coalition in 2013, when he was best known for reforming the subsidy system that gives financial support to ultra-Orthodox Jewish men who study religious texts instead of entering the labor market. Subsequent governments reversed most of these measures.

To remove Mr. Netanyahu from office, Mr. Lapid said last month he would be willing to rotate the prime ministership with Mr. Bennett, the ultranationalist, and even allow Mr. Bennett to become prime minister first, even though Mr. Bennett’s party, Yamina, or “Right,” won only seven seats.

Mr. Lapid has suggested Mr. Bennett could lead the country for part of their shared term before relinquishing the premiership to Mr. Lapid.

“I offered Bennett a unity government in which he could serve first in the rotation between us,” Mr. Lapid said last month. “That’s what the country needs now. The Israeli public needs to see that its leaders can work together.”

Mr. Bennett, 49, is a former director general of the Yesha Council, an umbrella group representing Jewish settlers in the occupied West Bank though he does not live there. Until January, he was part of a political alliance with Bezalel Smotrich, a far-right leader.

A former elite commando and software entrepreneur, Mr. Bennett once worked in the high-tech industry in New York, where his wife worked as a pastry chef. He served as chief of staff for Mr. Netanyahu before breaking with the leader a decade ago and founding his own party.

He has served as a cabinet minister in Netanyahu-led coalitions, most recently as defense minister. This week, Mr. Netanyahu made a last-gasp effort to remain in government by offering Mr. Bennett a power-sharing deal in which, like the deal proposed by Mr. Lapid, Mr. Bennett would go first as prime minister.

But Mr. Bennett rejected it because the proposed alliance would still not have commanded a parliamentary majority.

Right-wing parties hold a majority in Parliament, but have been unable to form a functional government over the past two years because they are divided between those who support Mr. Netanyahu, and those who believe he should resign to focus on his corruption trial.

That split has redrawn the Israeli political map — as political ideology has become defined more by perceptions of Mr. Netanyahu than by economic policy or approaches to the Israeli-Palestinian conflict.

The current impasse has arisen because the number of lawmakers who support and oppose Mr. Netanyahu has remained roughly level in each of the four elections since 2019.