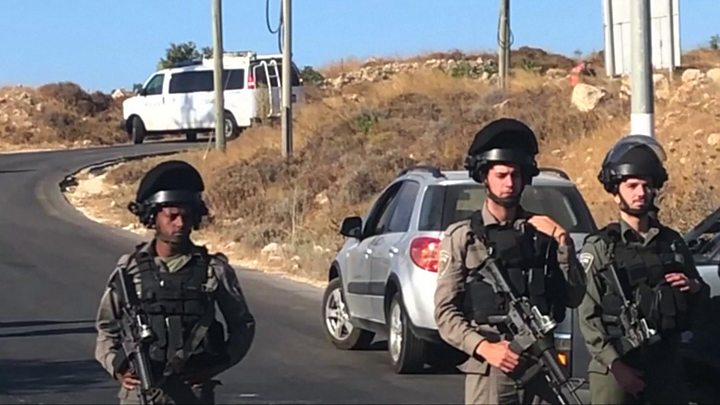 Israeli forces are hunting for the killer of a 19-year-old off-duty soldier, found stabbed to death in an apparent failed kidnap attempt.

Cpl Dvir Sorek’s body was found outside the Jewish settlement of Migdal Oz in the Israeli-occupied West Bank.

He is believed to have been abducted elsewhere before being stabbed and left at a roadside, Israeli media report.

There has been no claim of responsibility for the killing, though a spokesman for Hamas, the Palestinian militant group which rules the Gaza Strip, justified the attack.

“The Etzion [Jewish settlement bloc] Operation was as much as a response to the crimes of Occupation, the latest of which was the one committed at Wadi Hummus; it is also a response to the continued occupation of the Palestinian territory,” Hazem Qasim said.

He was referring to the recent demolition by Israel of Palestinian homes in the area of Wadi Hummus which Israel said were built illegally too close to the separation barrier in the West Bank.

The body of Cpl Sorek, missing since Wednesday, was reportedly found at around 03:00 (00:00 GMT) on Thursday.

He was stabbed “while neither armed nor in uniform, close to the yeshiva [Jewish seminary] where he was studying”, the Israeli Defense Forces (IDF) said.

The teenager was in a programme that combined religious studies with military service and had only recently been drafted.

19-year-old Corporal Dvir Sorek was stabbed and killed in a terrorist attack early this morning, while neither armed nor in uniform, close to the Yeshiva where he was studying.

May his memory be a blessing. pic.twitter.com/JrJdlJGlUM

Security forces “are beginning to carry out steps on the working assumption that there is a terrorist cell in the area that carried out the attack”, an IDF spokesman said.

Troops, police and Israel’s Shin Bet security service have been deployed to carry out searches in areas of Jerusalem, the Times of Israel reports.

The incident, which happened in an area between Jerusalem and Hebron in the southern part of the West Bank, risks stoking tensions between Israel and Palestinians.

Cpl Sorek’s killing has echoes of the abduction and murder of three Israeli teenagers in the same area of the West Bank in 2014.

The murders of Naftali Fraenkel, 16, Gilad Shaer, 16, and Eyal Yifrah, 19, triggered a massive search in the West Bank, and eventually escalated into a conflict between Israel and Palestinian militants in Gaza.

The killers of the teenagers came from Hamas.

Prime Minister Benjamin Netanyahu, speaking at an event to mark 650 new housing units in a West Bank settlement, said Israel had lost “one of the best of our sons”.