JERUSALEM — A large oil spill from an unknown source has devastated sea life in the Mediterranean and spewed tons of tar across more than 100 miles of coastline from Israel to southern Lebanon in what Israeli officials are calling one of the worst ecological disasters in decades.

Shaul Goldstein, the director of Israel’s nature and parks authority, said the spill would set back three decades of efforts to protect and renew biodiversity along the coastline.

“I feel like I want to cry,” said Mr. Goldstein, who has spent the past several days removing tar from the beaches. “It’s everywhere — it’s even four to five inches thick in some places.”

Israeli authorities said they are investigating the cause of the spill, which the environmental protection ministry said it only learned about when thick clumps of tar showed up on beaches last Wednesday, prompting an enormous cleanup effort to try to mitigate the damage.

But much about the incident remains unclear because an Israeli court in Haifa issued a gag order, at the behest of the government, restricting the publication of many details related to the case — including everything connected to the methods of the investigation, the parties involved in the investigation and any detail coming from the investigation.

Yoni Shamir, a lawyer representing the government, said in court on Tuesday that the restrictions were needed to avoid undermining the investigation. In investigations concerning both national security issues and criminal cases, it is not uncommon for the courts to issue such gag orders.

Thousands of volunteers and hundreds of soldiers and police officers have participated in the cleanup, which Mr. Goldstein said he expected to last for at least several months, especially in rocky areas where removing the tar can be complicated.

On Tuesday, Israel announced that it would invest millions of dollars in cleaning up the beaches and documenting the scope of the damage. 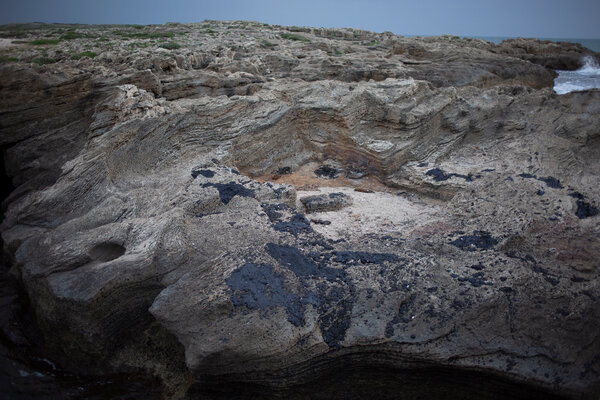 Last Thursday, a 55-foot-long fin whale washed up on a beach in the port city of Ashdod, south of Tel Aviv. Veterinarians said they found black liquid in the whale’s lungs during an necropsy, but they did not definitively connect the animal’s death to the spill.

The environmental protection minister, Gila Gamliel, and Prime Minister Benjamin Netanyahu visited the beach in Ashdod on Monday, where they walked by scattered patches of tar.

The environmental protection ministry has said it has identified about 10 ships as potential suspects of “the environmental offense” and said it believed it took place outside Israel’s territorial waters, approximately 31 miles from its coast.

Ms. Gamliel said the authorities would do everything possible to locate the parties responsible for the spill and could sue the company that insured the ship responsible for it.

On Sunday, several government agencies warned Israelis against swimming in the ocean or relaxing or playing sports at the beach, emphasizing “exposure to the tar could damage the public’s health.”

A small number of employees who worked for the nature and parks authority were given supplemental oxygen because they experienced difficulty breathing after inhaling tar fumes while working to clean up the beach, according to a spokeswoman for the agency.

Experts contended that the spill revealed vulnerabilities in Israel’s maritime security and showed that authorities needed to bolster efforts to monitor waters within its exclusive economic zone.

“In Israel, we have maritime domain blindness,” said Shaul Chorev, a retired rear admiral in the Israeli Navy who is now head of Haifa University’s Maritime Policy and Strategy Research Center. “Our activities are always focused on foiling terrorists activities, but that’s not the whole picture of security in the sea.”

Admiral Chorev said preventing future oil spills from reaching the coastline would not only require Israel to invest in satellites and other tracking devices, but also to assign a government body with the clear responsibility of monitoring its coast for ecological disasters as well as containing them.

Environmental activists warned while the damage caused by the spill was significant, a leak by one of the natural gas rigs off Israel’s coast could be even more destructive. Israel has invested heavily to develop natural gas fields off its coast and began exporting gas to Egypt in late 2019.

“This should be a wake up call,” said Maya Jacobs, the director of Zalul, an organization that advocates preserving bodies of water in and around Israel, which relies heavily on desalinized water. “We must step up oversight of the rigs immediately and transition to using renewable energies.”

In Lebanon, the prime minister’s office said the tar reached that country’s southern shores. It also claimed the oil spill originated from an Israeli ship, but provided no evidence to back up the claim.

Yasser al-Shanti, the head of the Water Authority in Gaza, said no oil had reached Gaza’s beaches, but that officials were tracking the situation.

Moshiko Saadi, an environmental activist who spent Tuesday helping to clean up a beach in northern Israel, said he was “heartbroken” by the ubiquity of the tar.

“So many people are cleaning and quickly filling bag after bag,” said Mr. Saadi “But then you look up and you see there are still huge amounts everywhere. It makes you feel helpless.”