JERUSALEM — After a fourth Israeli election in two years appears to have ended in another stalemate, leaving many Israelis feeling trapped in an endless loop, there was at least one surprising result on Wednesday: An Arab political party has emerged as a potential kingmaker.

Even more surprising, the party was Raam, an Islamist group with roots in the same religious movement as Hamas, the militant group that runs the Gaza Strip. For years, Raam was rarely interested in working with the Israeli leadership and, like most Arab parties, was ostracized by its Jewish counterparts.

But according to the latest vote count, Raam’s five seats hold the balance of power between Prime Minister Benjamin Netanyahu’s right-wing bloc and the motley alliance of parties that seeks to end his 12 years in power. The vote tally is not yet final, and Raam has previously suggested it would only support a government from the outside.

Still, even the possibility of Raam playing a deciding role in the formation of a coalition government is making waves in Israel. An independent Arab party has never been part of an Israeli government before, although some Arab lawmakers supported Yitzhak Rabin’s government from the outside in the 1990s.

Suddenly in a position of influence, Raam has promised to back any group that offers something suitable in return to Israel’s Arab minority, who are descended from the Palestinians who stayed after Israel’s creation in 1948 and who today form about 20 percent of the population.

“I hope to become a key man,” Mansour Abbas, the party’s leader, said in a television interview on Wednesday. In the past, he added, mainstream parties “were excluding us and we were excluding ourselves. Today, Raam is at least challenging the political system. It is saying, ‘Friends, we exist here.’”

The party is not in “anyone’s pocket,” he added. “I am not ruling out anyone but if someone rules us out, then we will of course rule him out.” 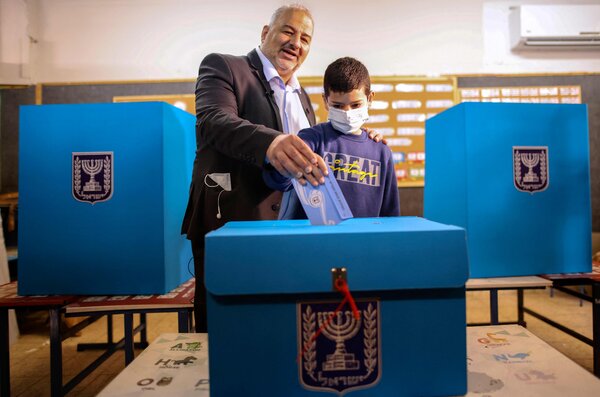 Either way would make for a strange partnership.

If Raam backed Mr. Netanyahu’s opponents, it would likely need to work with a right-wing opposition leader, Avigdor Liberman, who has described some Arab citizens as traitors and called for them to leave the country.

If it supported the Netanyahu-led bloc, Raam would be working with a prime minister who enacted legislation that downgraded the status of the Arabic language and said that only Jews had the right to determine the nature of the Israeli state. In a previous election, Mr. Netanyahu warned of high Arab turnout as a threat to encourage his own supporters to vote.

Raam would also be cooperating with an alliance that includes far-right politicians who want to expel Arab citizens of Israel they deem “disloyal” to the Israeli state. One of those politicians, Itamar Ben Gvir, until recently hung in his home a picture of a Jewish extremist who murdered 29 Palestinian Muslims in a West Bank mosque in 1994.

But Mr. Abbas is prepared to consider these possible associations because he believes it is the only way for Arab citizens to secure government support in the fight against the central problems assailing the Arab community — gang violence, poverty and restrictions on their access to housing, land and planning permission.

In the past, “Arab politicians have been onlookers in the political process in Israel,” he said in an interview with The New York Times in February. Today, he added, “Arabs are looking for a real role in Israeli politics.”

The move would mark the culmination of a gradual process in which Arab parties and voters have grown incrementally more involved in the electoral process.

Raam, a Hebrew acronym that stands for the United Arab List, is affiliated with a branch of an Islamist movement that for years did not participate in Israeli elections. Raam was founded in 1996 after some members of that movement voted by a narrow margin to run for Parliament, an event that split the movement in two. The other branch, which Israel has outlawed and whose leader it has jailed, does not participate in elections.

Raam later joined the Joint List, a larger Arab political alliance that emerged as the third-largest party in three recent Israeli elections, in a sign of the Arab minority’s growing political sway.

Recognizing this increased importance of Arab voters, Mr. Netanyahu canvassed hard for their support during the recent election campaign.

The party separated from the Joint List in March, frustrated at how its parliamentary presence meant little without executive power, and declared itself ready to join a government of any color that promised political rewards to Arab citizens.

On Wednesday, that gamble appeared to have been rewarded. Asked whether Mr. Netanyahu would consider a government supported by Mr. Abbas, Tzachi Hanegbi, a government minister, said if a right-wing government of Zionist parties was impossible to assemble, his party would consider “options that are currently undesirable but perhaps better than a fifth election.”

Raam’s newfound relevance constitutes “a historical moment,” said Basha’er Fahoum-Jayoussi, the co-chairwoman of the board of the Abraham Initiatives, a nongovernmental group that promotes equality between Arabs and Jews. “The Arab vote is not only being legitimized but the Palestinian-Arab community in Israel is being recognized as a political power with the ability to play an active and influential part in the political arena.”

The news was also greeted happily in the Negev desert, where dozens of Arab villages are threatened with demolition because they were built without authorization.

“The possibility that Abbas can pressure the government to recognize our villages stirs up emotions of optimism,” said Khalil Alamour, 55, a lawyer whose village lacks basic infrastructure like power lines and sewerage because it was built without Israeli planning permission.

Within Mr. Netanyahu’s party, there is considerable dissent to the idea of relying on Mr. Abbas. Some members fear working with — and being held to ransom by — a group that is ideologically opposed, for instance, to military operations in the occupied territories.

The government should not be “dependent on a radical Muslim party,” said Danny Danon, chairman of the World Likud, the international branch of Mr. Netanyahu’s party. “We should not be in that position.”

Among the opposition bloc, there is also disquiet at the prospect of an alliance. Some of its right-wing members already vetoed working with Arab lawmakers during an earlier round of negotiations last year. And Raam’s social stances — it voted against a law that bans gay conversion therapy — are at odds with the vision of left-wing opposition parties like Meretz.

“It’s going to be very challenging no matter how you look at it,” said Ms. Fahoum-Jayoussi. “When push comes to shove, it’s still hard to see whether Mansour Abbas’s approach is a real one that he can push through.”

And some Palestinian citizens of Israel are highly skeptical of Raam’s approach. Ayman Odeh, the leader of the Joint List, has accused Mr. Abbas of assenting to a relationship with the Israeli state that frames Arabs as subjects who can be bought off, rather than as citizens with equal rights.

“Mansour Abbas is capable of accepting this,” Mr. Odeh said in an interview before the election. “But I will not.”