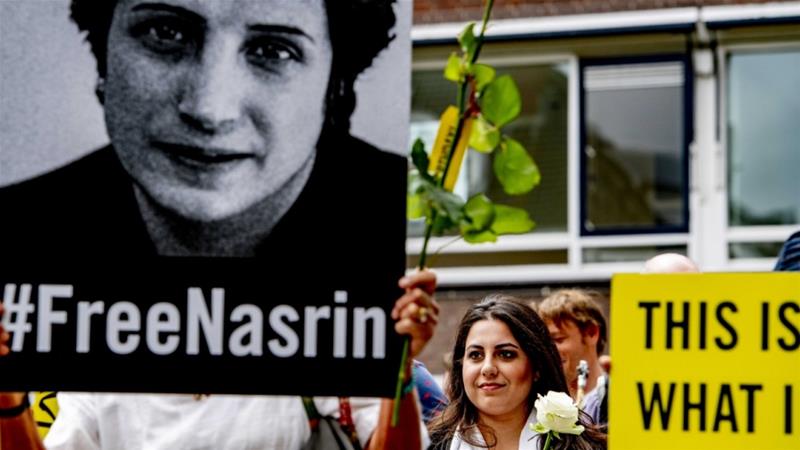 Imprisoned Iranian human rights lawyer Nasrin Sotoudeh has been hospitalised after being “severely weakened” after a weeks-long hunger strike, her husband said.

Sotoudeh was transferred to the cardiac care unit shortly after being taken to the emergency ward of Taleghani hospital in the capital, Tehran, Reza Khandan told AFP news agency over the telephone on Saturday.

“We were allowed to see her for a few moments,” he added. “She was severely weakened, lost a lot of weight and had sunken eyes”.

Sotoudeh has been on a hunger strike for more than 40 days, according to Khandan.

The strike aimed at calling for the freeing of political prisoners and directing attention towards their condition during the coronavirus pandemic, according to an August 11 statement by Sotoudeh published by Khandan on social media.

COVID-19 has so far killed more than 24,000 people in Iran amid almost 420,000 infections, according to official figures.

Khandan told AFP he worried for his wife as the hospital “is not a safe place vis-a-vis the coronavirus” and lacks “proper isolation” with many infected patients. He added, however, that her last scan has not shown a sign of infection.

Her family said they were notified of her condition through one of her fellow inmates.

“The prison does not cooperate, they don’t properly answer when you ask about (prisoners’) condition. They had not even told us” of her hospitalisation, said Khandan.

Sotoudeh was arrested in 2018 on charges of collusion and propaganda against Iran’s rulers and eventually was sentenced to 38 years in prison and 148 lashes. Under the law, she must serve at least 12 years.

The 57-year-old is a co-laureate of the European Parliament’s Sakharov Prize. She won the prestigious award in 2012 for her work on high-profile cases including those of convicts on death row for offences committed as minors.

This is not Sotoudeh’s first time in prison.

She had also spent three years behind bars after representing dissidents arrested during mass protests in 2009 against the disputed re-election of the ultra-conservative President Mahmoud Ahmadinejad.

She was also banned from practising law for 20 years, before the Lawyers’ Court at the Tehran Bar Association overturned the ban on her legal practice in August 2014.

During her first time in jail, Sotoudeh also staged two hunger strikes in protest against the conditions in Evin and a ban on seeing her son and daughter.

She was released in September 2013, shortly before Iran’s then-newly elected President Hassan Rouhani, who had campaigned on a pledge to improve civil rights, attended the UN General Assembly.