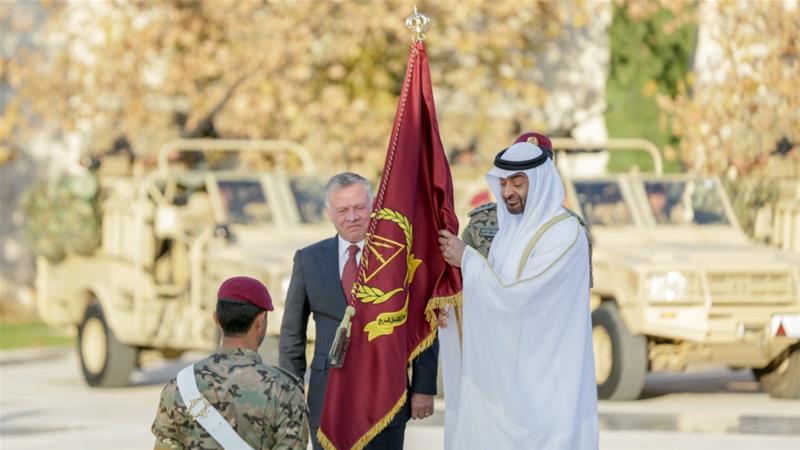 Senior Jordanian military officers have expressed displeasure over the renaming of one of the country’s combat brigades after the Abu Dhabi Crown Prince Mohammed bin Zayed al-Nahyan.

The move is “deeply insulting to Jordan’s military traditions”, said a senior officer who wished to remain anonymous.

“Sadly, it looks like money can change and buy everything, including our military and its traditions.”

Jordanian military officers are barred from commenting publicly about political and military issues, including the renaming of the brigade, and could be charged if found to have done so.

The UAE signed a $100m grant agreement with the Jordan’s Crown Prince Foundation during al-Nahyan’s visit to the country on Tuesday to support business development in Jordan.

“The renaming of the brigade is ill-conceived and it contradicts Jordan’s military values,” Mahmoud Hammad, a retired general and former commander of Jordan’s land forces, told Al Jazeera.

“The military divisions are named after royal family members and historic Muslim commanders. I respect Abu Dhabi’s crown prince and his late father but to have one of Jordan’s armed forces units named after him is just too much.”

Earlier, a statement by Jordan’s royal court said: “Naming the brigade after the UAE crown prince is an expression of the deep brotherly ties between the two nations.”

The brigade was established in 2014 during the Syrian civil war with the help of the US army.

The US Central Command, which lists Jordan, Syria and Iraq as part of its area of responsibility, envisioned the brigade as a strike force to target ISIL fighters in Iraq and Syria.

The US also equipped the brigade with eight US-made Blackhawk helicopters.

Since the 1960s, Jordanian military officers have trained and advised UAE and other Gulf militaries.

Jordan currently has “between 80 and 100” combat special forces that support the UAE’s efforts in the war in Yemen, according to senior Jordanian officers.