Verdict in politicised trial on assassination of former PM Rafik Hariri will pile pressure on Hezbollah and allies. 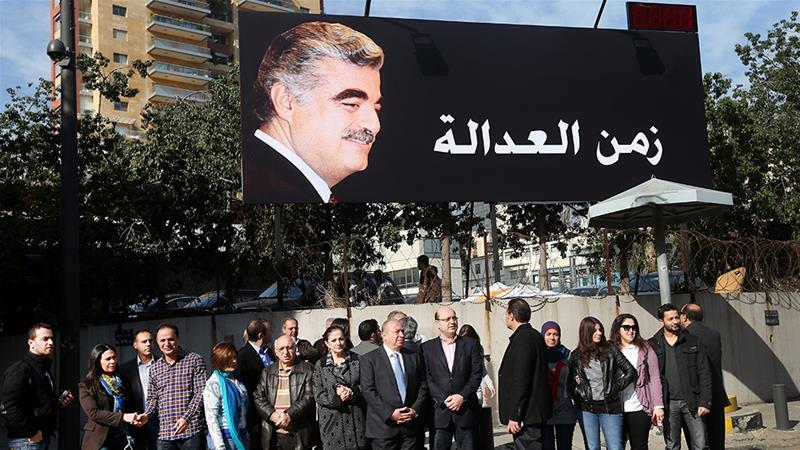 Beirut, Lebanon – Years after former Lebanese Prime Minister Rafik Hariri was assassinated, a large billboard was put up at a main Beirut intersection. It bore Hariri’s smiling image, contrasted against a black background, and the words “time for justice” in large, white letters.

A ticker above the billboard’s top right corner counted up the days to justice. By last year, it stopped working. Then, at some point during the winter that no one in the area seems to remember, the billboard itself disappeared.

On Tuesday, the verdict in the trial of four individuals accused of Hariri’s assassination will finally be handed down by the Special Tribunal for Lebanon (STL) – an international court based near the Hague, in the Netherlands – more than 15 years after he was killed in a massive car bombing on February 14, 2005, along with 21 others.

Four members of Iran-backed militia and political party Hezbollah stand accused of organising and carrying out the attack, though Hezbollah itself is not formally accused.

At the time, large swaths of Lebanon’s population laid final blame for the assassination on Syria, and enormous protests set off a chain of events that led Syrian forces to withdraw from Lebanon after some 40 years in the country.

Since its inception in 2007, the STL has been demonised by the pro-Syria camp in Lebanon, chiefly Hezbollah, who have said it is a conspiracy against them. Others see it as the only way to achieve justice in a country with a weak, politically exposed judiciary.

But Lebanon has a different set of problems today than it did 15 years ago. The verdict will be announced to a people free-falling into an endless downward spiral of economic collapse, political crisis, coronavirus outbreak, and an explosion that killed more than 170 people and injured 6,000, dwarfing the attack that killed the former prime minister.

There are some parallels: Many, including local and international organizations and the families of some victims, have called for an international investigation into the blast, citing their lack of trust in Lebanese authorities.

The pro-Syria camp, represented by President Michel Aoun and Hezbollah, have rejected these calls, saying they have no confidence in international justice.

In the run-up to the verdict, Former Prime Minister Saad Hariri and his brother Baha, two of Rafik’s sons, have urged supporters to exercise restraint. Still, it will undoubtedly add to simmering tensions and rage against the strongest political forces in the country – Hezbollah and its allies.

“The verdict will add fuel to rising anti-Hezbollah sentiment in Lebanon,” Hilal Khashan, a veteran professor of political science at the American University of Beirut, told Al Jazeera. “No one believes for a second that four unruly members of this highly disciplined group carried out this attack on their own accord.”

Hariri’s assassination was internationalised from the beginning, owing to the scale of the attack and Hariri’s larger-than-Lebanon ties to world leaders including Jaques Chirac, the French president at the time.

A UN investigation began just weeks after the explosion, before the STL formally took over in 2009.

On trial are Salim Ayyash, accused of overseeing preparations for the attack, as well as Hussein Oneissi, Assad Sabra, and Hassan Merhi. None of the defendants was ever located, and Hezbollah leader Hassan Nasrallah proclaimed they never would be, not even in “300 years”.

The prosecution’s case focuses heavily on a network of mobile phones that followed Hariri around in the months before his assassination, before almost all went dark after it was carried out. The defence has argued there are gaps in the evidence and it is circumstantial at best.

The UN investigation first focused on Syrian involvement, and four top generals were detained for four years until the STL ordered their release in 2009 saying they had been arbitrarily detained.

Investigations then turned to focus on the Hezbollah members.

MP Jamil Sayyed, a former head of general security who was one of the generals arbitrarily detained for four years, told Al Jazeera the investigation into Hariri’s assassination was a “dirty political game” from the beginning.

“The goal even before the investigation started was to show that Syria and its allies killed Hariri, and then they looked for the evidence to support those claims, rather than the legal procedure for investigation which gets to conclusions through facts and evidence and true witnesses,” he said.

But Peter Haynes, the lead legal representative for the victims in the case, told Al Jazeera the trial “identified plainly criminal behaviour in the same way many international investigations do, and I don’t think it is in any way illegitimate”.

Haynes cites the time elapsed since the crime as the main issue in the trial but said it is not a “futile exercise” for the roughly 70 people he represents.

“From the perspective of the victims, it does achieve justice because it creates an historical record – even if they would have liked the verdict to be out years back and to have the accused sitting on the dock,” he said.

The lead defence council did not respond to a request for comment.

Even if victims are able to find some closure, “Lebanese public opinion at large is not convinced,” Karim Emile Bitar, director of the Institute of Political Science at Lebanon’s Saint Joseph University, told Al Jazeera.

“Most people you speak to, even die-hard supporters of Rafik Hariri, do not believe that this is really justice because it’s been 15 years, because there were so many shifting alliances in the past 15 years, because Hariri’s son, Saad, himself in 2009 reconciled with Syrian President Bashar al-Assad.”

Bitar said Lebanon had witnessed an average of one assassination per year since independence in 1943, be they top politicians, prominent journalists or investigators.

The Hariri trial was significant in seeking to hold people accountable for such a killing for the first time, he said. But “justice delayed is justice denied”.