The US president’s son-in-law urged Middle East leaders to back a Palestinian ‘peace plan’ without Palestinian support. 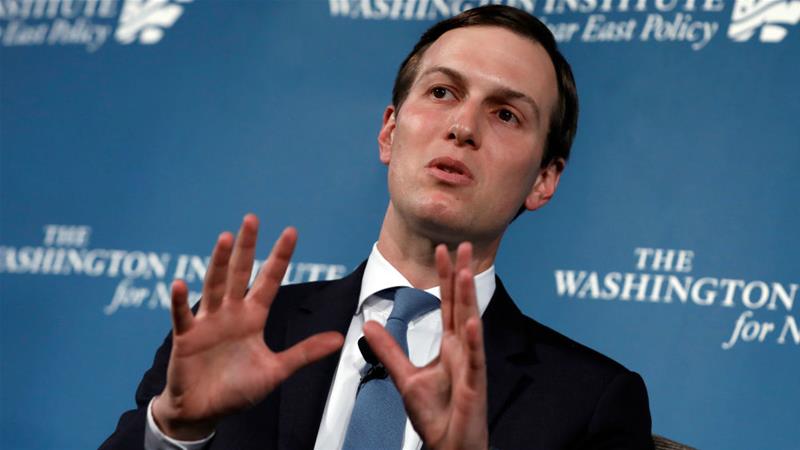 London, United Kingdom – Jared Kushner, senior adviser to US President Donald Trump, has met European officials as he tried to save a Middle East peace plan that appears doomed before it’s even been formally revealed.

The president’s son-in-law has been clocking up diplomatic miles, trying to drum up support for his long-awaited Middle East peace proposal, visiting Morocco, Jordan and Israel last week.

On Tuesday, he wrapped up his tour by meeting European Commission head Jean-Claude Juncker and EU foreign policy chief Federica Mogherini in Brussels.

As with the Middle East leaders Kushner met last week, EU officials remained tight-lipped about the details of the discussions.

Details of his peace plan have not been released but it is thought to involve promising Palestinians economic development in return for them giving up ambitions for statehood.

The economy of the occupied Palestinian territories is stagnant, the Trump administration has withdrawn aid funding and the Israeli government has withheld the Palestinian Authority’s tax revenues.

Despite the economic hardship, the Palestinians have indicated they will reject Kushner’s proposals if, as expected, his plan does not promote a Palestinian state and an end to the Israeli occupation.

Mike Stephens, a researcher at the UK-based Royal United Services Institute, told Al Jazeera: “The Palestinians are effectively broke, but that’s probably one of the reasons why they won’t negotiate. They won’t negotiate under this sort of duress. They see it as being strong-armed into accepting an agreement that’s not in their interests.”

Rejection by the Palestinians makes it very difficult for King Abdullah II of Jordan and, to a lesser extent, other Arab leaders, to support Kushner’s plans.

A palace statement released after last week’s meeting in the capital Amman said the king stressed the importance that a peace plan should be based on the two-state solution.

Kushner’s plan may not even receive support from Israel – at least in the short-term.

Following a national election, Israeli Prime Minister Benjamin Netanyahu has been unable to form a government, leading the parliament to dissolve itself. A new election has been scheduled for September.

As a result, Israeli politicians have other priorities and may be unwilling to risk their reputation on a peace deal which looks likely to fail.

However, Hagar Kotef, of London’s School of Oriental and African Studies, noted that Netanyahu is facing corruption charges which could carry a prison term as punishment.

“An unconditional support from Trump accompanied by support from the Israeli centre and its [media and legal] institutions may be what he thinks is his best option in this regard,” Kotef told Al Jazeera.

Kotef added that the deal, which looks unlikely to grant Palestinians any of their key demands, could also win support among the Israeli centre and some of the left.

US ally Morocco may also be persuaded to back the plan, while the rulers of Saudi Arabia and the United Arab Emirates are also close to the White House.

International relations professor Scott Lucas of Birmingham University said Rabat, Riyadh and Abu Dhabi might support Kushner in return for the Trump administration continuing to supply them with US arms.

“It’s not like the Arab states are that invested in the Palestinian cause now,” he said. On the other hand, Stephens pointed out that the global Muslim community will not thank any leader who legitimises Israel’s control of Jerusalem.

Without the Palestinians though, prospects for peace are so minimal that critics have suggested the tour is as much about Kushner’s ego as anything else.

Stephens said it kept Kushner’s profile high – while Lucas suggested it was an opportunity for him to “play big boy on the international stage”.