Powerful associates of Syria’s president, Bashar al-Assad, are making and selling captagon, an illegal amphetamine, creating a new narcostate on the Mediterranean. 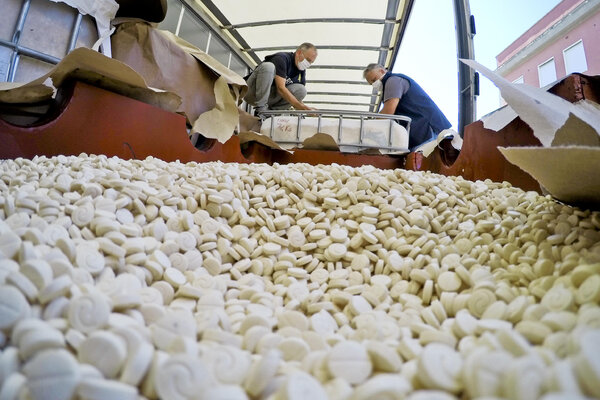 By Ben Hubbard and Hwaida Saad

BEIRUT, Lebanon — Built on the ashes of 10 years of war in Syria, an illegal drug industry run by powerful associates and relatives of President Bashar al-Assad has grown into a multi-billion-dollar operation, eclipsing Syria’s legal exports and turning the country into the world’s newest narcostate.

Its flagship product is captagon, an illegal, addictive amphetamine popular in Saudi Arabia and other Arab states. Its operations stretch across Syria, including workshops that manufacture the pills, packing plants where they are concealed for export, and smuggling networks to spirit them to markets abroad.

An investigation by The New York Times found that much of the production and distribution is overseen by the Fourth Armored Division of the Syrian army, an elite unit commanded by Maher al-Assad, the president’s younger brother and one of Syria’s most powerful men.

Major players also include businessmen with close ties to the government, the Lebanese militant group Hezbollah, and other members of the president’s extended family, whose last name ensures protection for illegal activities, according to The Times investigation, which is based on information from law enforcement officials in 10 countries and dozens of interviews with international and regional drug experts, Syrians with knowledge of the drug trade and current and former United States officials.

The drug trade emerged in the ruins of a decade of war, which shattered Syria’s economy, reduced most of its people to poverty and left members of Syria’s military, political and business elite looking for new ways to earn hard currency and circumvent American economic sanctions.

Illicit speed is now the country’s most valuable export, far surpassing its legal products, according to a database compiled by The Times of global captagon busts.

In recent years, the authorities in Greece, Italy, Saudi Arabia and elsewhere have seized hundreds of millions of pills, most of them originating from one government-controlled port in Syria, some in hauls whose street value could exceed $1 billion, according to law enforcement officials.

Where captagon has been seized since 2016