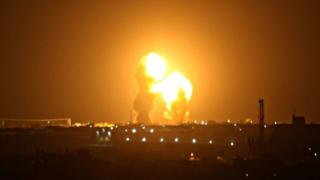 Israel has launched fresh air strikes on militant targets after renewed rocket-fire from Gaza, as a day-old ceasefire is put under strain.

It comes after five rockets were fired at Israel on Thursday following the ceasefire declaration by the PIJ.

Fighting flared after Israel killed a PIJ commander on Monday.

Israel said Baha Abu al-Ata was a “ticking bomb” who was behind a planned imminent attack and responsible for recent rocket-fire from Gaza.

More than 450 rockets and mortars were fired at Israel, and several waves of air strikes carried out on Gaza in two days of violence.

Israel said 25 of the Palestinians killed were militants, including those hit preparing to launch rockets.

In the deadliest incident, a family of eight was killed in an air strike on a house in Deir al-Balah, in central Gaza, hours before the ceasefire was announced.

Palestinians said the dead were all civilians from the Abu Malhous family. But the Israeli military insisted that the head of the family, Rasmi Abu Malhous, was a commander of a PIJ rocket-launching unit.

‘Fingers on the trigger’

The Israel Defense Forces (IDF) said aircraft struck a PIJ compound overnight used to construct missile components, as well as the group’s headquarters in the town of Khan Younis.

It said Israel’s air defences had intercepted five rockets launched from Gaza since the ceasefire was declared, calling this violation “very severe”. 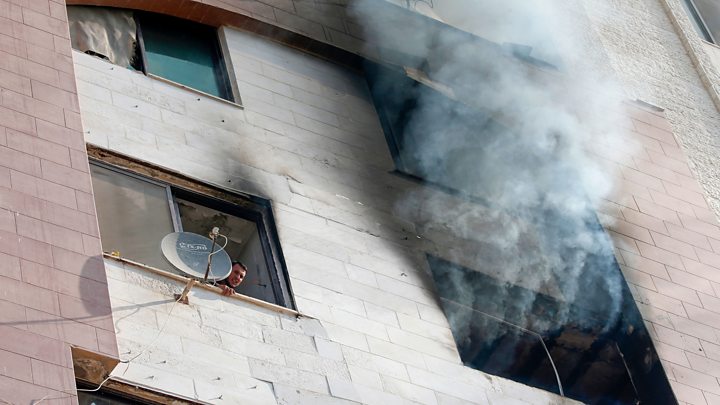 Both sides have warned they are prepared to retaliate if they are attacked.

The IDF said it would “continue operating as necessary” to protect Israeli civilians, while the military wing of the PIJ said its fighters “still have their fingers on the trigger”.

Unusually, Israel has not targeted facilities belonging to the dominant militant group in Gaza, Hamas, which Israel usually holds responsible for attacks by any militants in Gaza.

Analysts say this suggests that Israel views the PIJ, seen as a formidable rival to Hamas, as acting in a rogue capacity and does not want to risk a broader conflict by drawing Hamas into the fighting.