AMMAN, Jordan — The prince and the general paced the garden outside the prince’s palace, locked in a deep argument. The prince was shouting, the general was barely audible. But the general made the threat.

“Starting from today,” said the general, as birds chirped overhead, “there will be a commitment from His Highness, the prince, not to go to these special occasions, not to mix with these people who have foreign and domestic agendas, and to restrict visits to family visits.”

Prince Hamzah bin Hussein responded furiously. “What is this talk? What have you said?” he shouted at Maj. Gen. Yousef Huneiti, the head of the Jordanian Army. “You tell me not to go out and meet with people? Not to mix with people? Sir, please.”

So began, at about 2 p.m. last Saturday, one of the most turbulent episodes in Jordan’s recent history. It spoiled the Jordanian monarchy’s reputation for discretion, and roiled the country’s image as a bastion of stability in a region wracked by unrest.

It also highlighted profound social tensions, including within the tribal structures on which the Jordanian social contract was founded. And there was a whiff of Saudi meddling, too.

Palace spats are a Jordanian leitmotif — but never this public.

“It’s the first time in the history of Jordan,” said Amer Al Sabaileh, a Jordanian political analyst, “that something happens on this level.”

By nightfall, Prince Hamzah stood accused by the government of having supported a foreign-backed conspiracy “targeting the security and stability of the nation” without specific mention of a coup. Eighteen aides and alleged associates were in detention, including Bassem Awadallah, a former senior Jordanian courtier who now advises the Saudi crown prince, Mohammed bin Salman.

Jordanian investigators believe that Prince Hamzah and Mr. Awadallah hoped to foment street unrest, according to three people briefed on the investigation, including Bruce Riedel, a former C.I.A. officer in touch with Middle Eastern intelligence agencies.

After General Huneiti’s visit, a recording of which was obtained by The New York Times, Prince Hamzah was placed in a loose form of house arrest. And from his palace, he transmitted videos and voice memos denying involvement in any plot, but accusing the government of corruption, incompetence and authoritarianism.

Prince Hamzah was not about to mount a coup, the government now insists. There were no irregular troop movements on Saturday that had suggested an imminent putsch. 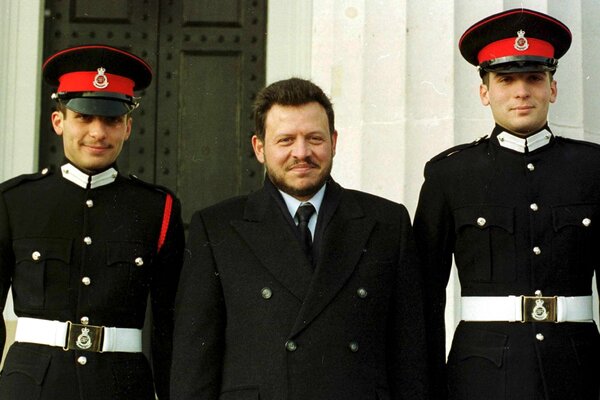 Just two days later, Prince Hamzah signed a letter pledging allegiance to King Abdullah II, his older half brother. He has not been heard from since, and the United Nations human rights office voiced concern about his predicament on Friday.

On Wednesday, the king announced that the prince’s “sedition has been nipped in the bud,” claiming the prince was safely in his own palace, under the king’s protection. And throughout the week, there was no question of the army’s loyalty to King Abdullah.

That a general felt compelled to make such an intervention nevertheless highlighted the insecurities and vulnerabilities of a state that many had considered as stable as it gets in the Middle East.

“The major takeaway from this event is that it demonstrated the fragility of this country,” said Khaled Ramadan, a veteran former lawmaker. The “perception of safety and security was shaken. It has created a new sort of anxiety in the minds of Jordanians.”

Squeezed between Syria, Iraq, Israel and the Israeli-occupied West Bank, the Kingdom of Jordan is generally viewed as a pocket of calm within an unsettled neighborhood. Western allies see the country as a key partner in campaigns against extremist groups. It is effectively a Western military camp, notably for American forces; a buffer against attacks on Israel; and a player in Israeli-Palestinian diplomacy. President Joseph R. Biden and Secretary of State Antony J. Blinken both called the king this past week in a signal of support.

Historically, the royal family’s grip on power was considered strong, bolstered by its projection of internal cohesion and an understanding between the monarchy and Jordanian tribes.

But by lashing out at his half brother and at perceived governmental ills, Prince Hamzah’s videos, recordings and other recent maneuvers don’t just underscore a latent tension within the monarchy. They also reflect the loosening of tribal influence, as well as wider social frustration at corruption and constraints on freedoms.

When the Jordanian state was founded in 1921, it was based on a pact between the Hashemite royal family and Bedouin tribes who roamed the area. For their support, the monarchy gave those tribes land and influence within the state machinery.

But since the 1990s, the government has privatized much of the economy, sold state assets and changed state institutions. The shift undermined the tribal role and heightened economic deprivation among rural tribes.

“It’s as if the people making decisions don’t really understand our traditions and the way we think,” said Hisham Majali, a business consultant, an elder from the Majali tribe, and a cousin of an aide to the prince.

The tension between prince and king was partly related to how Prince Hamzah had implicitly become a standard-bearer for those left marginalized or frustrated.

In recent years, Prince Hamzah has spoken out against high-level corruption, an issue the public associates with privatization. And he has visited tribal leaders and attended tribal events, perceived as a provocative attempt to foment tribal frustration and social discontent.

“He didn’t create these grievances,” said Mr. Ramadan, the former lawmaker. “He tapped into them.”

But before Prince Hamzah reinvented himself as a government critic, he was the epitome of a palace insider. After King Abdullah inherited the crown in 1999 from their father, King Hussein, he appointed Prince Hamzah as his own crown prince and successor.

Both men were educated at Harrow, an elite British school, and Sandhurst, the British officer-training academy.

But their paths diverged in 2004, when King Abdullah removed his half brother as crown prince — later replacing him with his own son, Prince Hussein, now 26.

The decision devastated Prince Hamzah, according to Jordanian officials. He had been considered a favorite of King Hussein’s, a more polished orator with a more academic mind than King Abdullah, and had been groomed as a teenager for the throne. Suddenly he was ejected from the circle of influence, and cast around for a new role.

At one point he asked his half brother to be commander in chief of the armed forces, a request that King Abdullah declined, according to a person briefed on the conversation.

Regardless whether the prince was sincere, the public frustrations he was attempting to channel were real.

Since 2015, Jordan has slipped 15 places down a global index published annually by Transparency International, an anticorruption monitor, from 45 to 60. This year, Freedom House, a democracy advocacy group, said Jordanian society was no longer free, having previously judged it “partly free.”

When speaking privately about sensitive issues, some Jordanians leave their phones elsewhere to avoid surveillance. This past week, a gag order briefly barred writing about Prince Hamzah.

Prince Hamzah’s meetings with people angry at the government formed the immediate backdrop to the showdown last Saturday. Last month, he visited relatives of victims of an accident at a coronavirus ward — a gesture deemed particularly provocative to the palace, since it added his princely weight to their grievances.

That led to General Huneiti’s visit to his palace and to the general’s demand that the prince accept de facto house arrest.

“Sir,” the general told him, “you have crossed the red lines.”

In the Jordan River valley, just east of Israel, agents in a 20-car convoy seized Yasser Majali, the prince’s chief of staff, according to two relatives.

A few miles away, Mr. Majali’s cousin, Sheikh Samir Majali, was arrested from the street, one relative said.

To members of the Majali tribe, the arrests seemed unjustified and unseemly. Yasser Majali had been convalescing at home from a heart attack and coronavirus infection, while Samir Majali had met the prince just a few times for lunch, they said.

“The tribes are always protecting everybody,” said Hisham Majali, a cousin of both men and a tribal elder. “And you come to our homes and violate us like this? It’s totally unacceptable.”

The government justified the moves by saying that they had been plotting to undermine the country’s stability.

According to the three people briefed on an investigation by Jordanian intelligence, Prince Hamzah and Mr. Awadallah, a former head of the Jordanian royal court who now advises the Saudi crown prince, plotted with disgruntled tribes to foment an atmosphere of upheaval.

Mr. Awadallah had advised the prince on how and when to tweet, the three people said. Mr. Awadallah also briefed opposition figures based overseas, as well as people in Saudi Arabia, one person said.

In recent days, the Saudi government issued strong statements of support for King Abdullah. But according to the three people briefed on the matter, a Saudi delegation to Amman this past week requested Mr. Awadallah’s release.

Jordanians have expressed surprise at any links between the prince and Mr. Awadallah, who has been accused of the same corruption assailed by the prince.

The king has suggested that the feud is resolved.

But others say the events of the last days may have given Prince Hamzah a far greater platform.

“You cannot say that Hamza is out of the political scene,” said Amer Al Sabaileh, the political analyst. “Now he’s a reality that you have to deal with.”