Ground and air units are patrolling near the Syrian border town of Darbasiya. 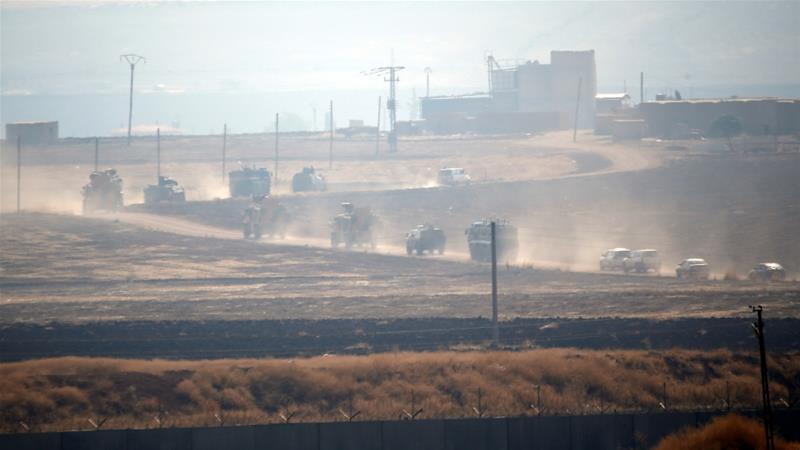 Turkish and Russian troops began their first joint ground patrols in northeast Syria on Friday under a deal between the two countries that forced Kurdish fighters to evacuate from a so-called “safe zone” on the Syrian side of the border.

Turkey and allied Syrian rebels launched a cross-border offensive on October 9 against the Kurdish People’s Protection Units (YPG), dubbed “terrorists” by Turkey, seizing control of 120km-long (75 miles) and 30km-deep (19 miles) strip of land along the frontier.

Russia has told Turkey that the YPG left the strip on Wednesday, a week after Ankara and Moscow agreed to remove the YPG fighters from the area.

Turkish armoured vehicles on Friday drove through country roads across the border to join their Russian counterparts, according to Reuters television footage filmed from the Turkish side of the border.

Ground and air units were involved in the patrol in the area of the Syrian border town of Darbasiya, the Turkish Defence Ministry said on Twitter, showing photographs of four armoured vehicles and soldiers studying a map.

Overnight, Turkey’s defence ministry said Turkey had handed over to the Russians 18 “regime elements”, believed to be Syrian government soldiers.

They were detained in Syria near the Turkish border this week. It said the move was coordinated with Russia but did not say who they were handed to.

They were seized on Tuesday during operations southeast of the Syrian town of Ras al-Ain, part of the area where Turkey’s military action took place, which stretches some 120km (75 miles) along the border to the town of Tal Abyad.

On Wednesday, President Recep Tayyip Erdogan said Turkey had information that the YPG had not completed its pullout.

He said Turkey’s joint patrols with Russia were starting on Friday at a depth of 7km (4 miles) within Syria, less than the 10km set out in the October 22 Ankara-Moscow deal.

Royal commentator Victoria Arbiter told Canadian TV station CTV that “all eyeballs” will be on the commonwealth service on March 9. Although Prince Harry and…