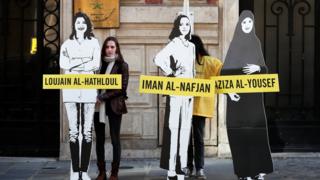 A number of women’s rights activists have gone on trial in Saudi Arabia in a case that has raised questions about the kingdom’s human rights record.

The first activists were detained last May, shortly before the lifting of a ban on women driving, for which many of them had campaigned.

Charges they face are said to include supporting “hostile elements” and could carry long prison sentences.

Demands for the women’s release have come from around the world.

Scrutiny of human rights in the kingdom has intensified since the murder of journalist Jamal Khashoggi at the Saudi consulate in Istanbul last October.

As many as 10 women were expected to appear at the criminal court in Riyadh on Wednesday, including prominent campaigners Loujain al-Hathloul, Aziza al-Yousef, Eman al-Nafjan and Hatoon al-Fassi.

Journalists and diplomats are not allowed to attend the hearing.

The public prosecutor’s office has not specified the charges against them, but said they were suspected of undertaking “co-ordinated and organised activities… that aim to undermine the kingdom’s security, stability and national unity”.

On Tuesday, Ms Hathloul’s brother said the trial had been switched to the criminal court from the Specialized Criminal Court, which was set up to try terrorism cases. The reason for the decision was not clear.

The Gulf Centre for Human Rights said on Tuesday it feared the women might not get a fair trial and that it was “deeply concerned” about their wellbeing.

In November, human rights groups reported that at least four of the women were alleging that interrogators had tortured them, including with electric shocks and whippings, and had sexually harassed and assaulted them. The Saudi deputy public prosecutor has said the allegations are “false”.

Saudi officials have accused critics of interfering in the Gulf kingdom’s domestic affairs “under the guise of defending human rights”.

Last August, Saudi Arabia froze trade ties with Canada and expelled its ambassador in response to calls to release the detained activists.

At the time, the Office of the UN High Commissioner for Human Rights said at least 15 human rights defenders and women’s rights activists critical of the Saudi government had been arrested or detained arbitrarily since 15 May.

Ms Badawi, who was given the US International Women of Courage Award in 2012, is known for challenging Saudi Arabia’s male guardianship system.

Raif Badawi was sentenced to 10 years in prison and 1,000 lashes for “insulting Islam” online in 2014. His wife, Ensaf Haidar, lives in Canada and has become a Canadian citizen.