HARANABUSH, Syria — When the Syrian government attacked their village, Radwan al-Shimali’s family hastily threw clothes, blankets and mattresses into their truck and sped off to begin new lives as refugees, leaving behind their house, farmland and television.

Among the belongings they kept was one prized technology: the solar panel now propped up on rocks next to the tattered tent they call home in an olive grove near the village of Haranabush in northwestern Syria.

“It is important,” Mr. al-Shimali said of the 270-watt panel, his family’s sole source of electricity. “When there is sun during the day, we can have light at night.”

An unlikely solar revolution of sorts has taken off in an embattled, rebel-controlled pocket of northwestern Syria, where large numbers of people whose lives have been upended by the country’s 10-year-old civil war have embraced the sun’s energy simply because it is the cheapest source of electricity around.

Solar panels, big and small, old and new, are seemingly everywhere in Idlib Province along Syria’s border with Turkey, rigged up in twos and threes on the roofs and balconies of apartment buildings, perched atop refugee tents and mounted near farms and factories on huge platforms that rotate to follow the sun across the sky. 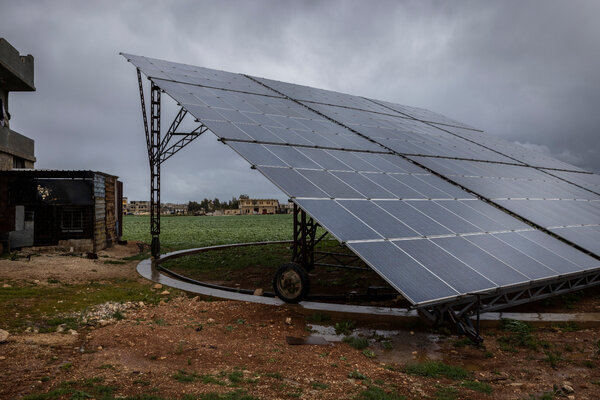 Many in the West view solar panels as a sign of affluence, and wealthy countries like the United States have invested billions of dollars to promote alternative energy.

But the solar boom in northwestern Syria is unrelated to fears of climate change or a desire to reduce a carbon footprint. It is the only viable option for many in a region where the government has cut the power and where imported fuel for private generators is far beyond most people’s means.

“There is no alternative,” said Akram Abbas, a solar panel importer in the town of al-Dana. “Solar energy is a blessing from God.”

Idlib Province emerged as a rebel stronghold early in the war. That’s why the government removed it from the national power grid, which is fueled by oil and gas power plants and hydroelectric dams on the Euphrates River.

At first, locals resorted to generators: small, gas-powered units for shops and large diesel engines to electrify whole apartment buildings. The perpetual roar and noxious smoke from the generators became part of life in rebel-controlled towns.

For a while, most of the fuel came from oil wells in eastern Syria controlled by the Islamic State. It was refined locally and very dirty, meaning that it gummed up the generators, which then required costly frequent maintenance.

By the time the Islamic State lost its last patch of territory in Syria in 2019, the northwest was importing fuel from Turkey that was much purer but cost more than twice as much, now about $150 for a 58-gallon barrel of Turkish diesel, compared with $60 for a barrel from eastern Syria a few years ago.

That price spike pushed customers into the arms of solar power, said Ahmed Falaha, who sells solar panels and batteries in the town of Binnish in Idlib. 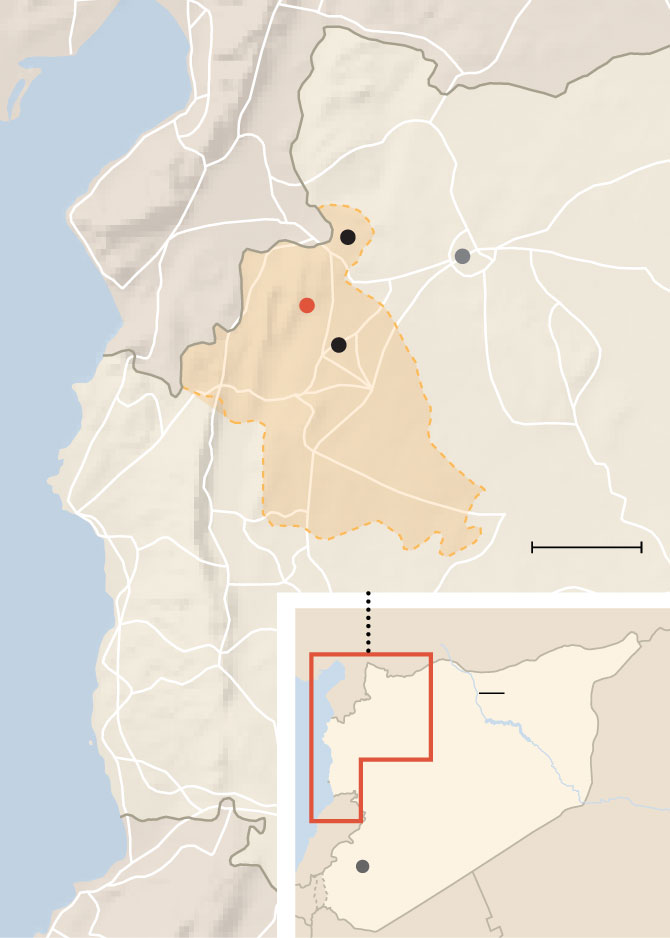 He had originally sold generators, but added solar panels in 2014. They weren’t popular at first because they produced less electricity, but when fuel prices went up, people noticed at night that their neighbors who had solar panels still had lights while they sat in the dark. Demand grew, and in 2017, he stopped selling generators.

“Now we work on solar energy day and night,” he said.

His best sellers were Canadian-made 130-watt panels that had been imported into Syria after a few years at a solar farm in Germany, he said. They cost $38 each.

His standard package for a modest home consisted of four panels, two batteries, cables and other equipment for $550, he said. Most families could use that to run a refrigerator or washing machine during the day and lights and a television at night.

As people got used to solar power, he started selling large installations to workshops and chicken farms. He recently sold his largest package yet, 160 solar panels for about $20,000, to a farmer who had nearly gone broke buying diesel to run his irrigation pump and needed a cheaper alternative.

“It is expensive at the start, but then it’s free,” Mr. Falaha said, showing a video on his phone of the solar-powered sprinklers watering a lush, green field.

Farmers who embraced solar appreciated the lack of noise and smoke, but what mattered most was price.

“Here, the last thing people think about is the environment,” Mr. Falaha said. Nearby, a colleague of his poured battery acid down the shop’s drain.

Outside of town, Mamoun Kibbi, 46, stood amid lush green fields of fava beans, eggplants and garlic.

In recent years, the price of diesel to power the family’s 40-year-old irrigation pump had gotten so expensive that it erased Mr. Kibbi’s profits. So last year he shelled out nearly $30,000 to install 280 400-watt panels on the flat roof of a defunct chicken farm.

The large swath of panels were on a seesaw base connected to a winch so he could adjust their angle to the sun through the day. When it was sunny, the system kept the pump going for eight hours. It worked less well on cloudy days, but he was pleased with how his crops looked so far.

“It is true that it costs a lot, but then you forget about it for a long time,” he said.

Most people in northwest Syria have simpler energy needs and much less money to invest. More than half of the 4.2 million people in the rebel-held area have been displaced from elsewhere, and many struggle to secure life’s basics, like healthy food, clean water and soap.

But many of the refugee families living in crowded tent camps have at least one solar panel that produces enough energy to charge their phones and power small LED lights at night. Others have three or four panels to power such luxuries as internet routers and televisions.

In the city of Idlib, Ahmed Bakkar, a former fireman, and his family had settled in the second floor of a four-floor apartment building whose roof had been punched in by an airstrike.

The family had moved six times during the war and lost nearly everything along the way, Mr. Bakkar said. Most of the rooms in the family’s current apartment lacked windows, so he had hung blankets to block the wind. They couldn’t afford heating oil, so they burned pistachio shells to keep warm.

But he had managed to buy four used solar panels that sat on a rack on the balcony, facing the sky.

When the sun was out, they provided enough energy to pump water up to the apartment so they didn’t have to carry it up, and they charged a battery so the family could have some lights at night.

“It is an alternative,” he said. But if Syria were more functional and the family could simply plug into the grid, “it would be better.”