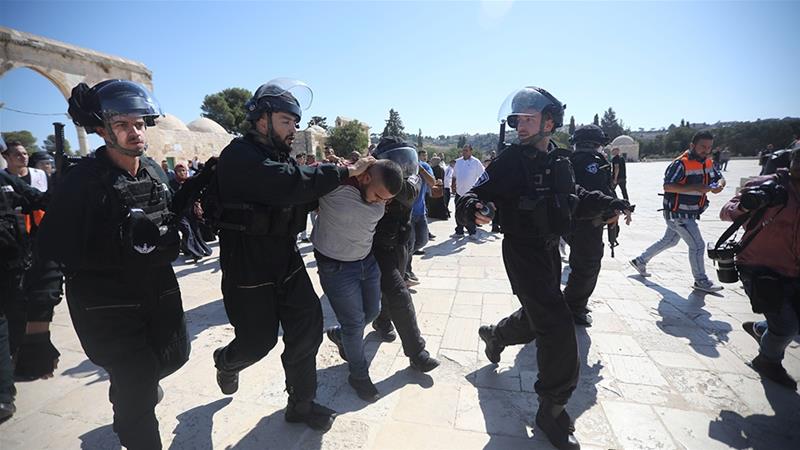 Israeli police have fired tear gas, rubber bullets and sound grenades to clear Palestinian worshippers from the Al-Aqsa Mosque compound in occupied East Jerusalem following a standoff at one of the gates to the site.

Thousands of Palestinians had gathered at the mosque for the first day of the Muslim festival of Eid Al-Adha on Sunday.

The day coincided with the Jewish holiday of Tisha B’Av, which typically sees an increase in Jewish visits to the holy site.

Facing off with police in the packed compound outside Islam’s third-holiest site, Palestinians chanted: “With our soul and blood we will redeem you, Aqsa.”

In a bid to ease tensions, police had reportedly barred Jewish visits to the site on Sunday, but Muslim worshippers still feared they would be allowed in and protested there.

In a statement, police said they had deployed forces at the site in anticipation of disturbances and “dispersed rioters”.

Reporting from occupied East Jerusalem, Al Jazeera’s Harry Fawcett said the temperature at the site had been rising for some time.

“The gate was opened, but no non-Muslims were allowed in. There was this big standoff and then we saw the security forces move in to clear that standoff,” Fawcett said.

“That’s when we saw the police use rubber bullets, tear gas and sound grenades,” he said, adding that at least 14 people were injured.

“There is a big political movement from the far right in Israeli politics to get more access to the area, and potentially to pray there in the future, and that is what is behind the tension,” said Fawcett.

It’s yet to be decided whether Jewish worshippers will be allowed into the compound, which is the flashpoint of the Israeli-Palestinian conflict.

The compound is situated in a part of East Jerusalem occupied by Israel in the 1967 Middle East war in a move that has not won international recognition.