LONDON — President Trump once offered a simple rationale for his hands-off approach to the case of Jamal Khashoggi, the Washington Post columnist killed at the Saudi Consulate in Istanbul: “It’s in Turkey, and it’s not a citizen.”

But this week, as Mr. Trump declared that he was sticking by the Saudi crown prince despite accusations that he was behind the killing, an American citizen was languishing in the bowels of the Saudi prison system.

The citizen, Walid Fitaihi, a Harvard-trained doctor, hospital owner, television host and motivational speaker, has been detained without trial for more than a year.

Dr. Fitaihi, a dual citizen, is one of scores of businessmen, princes, clerics, scholars and activists rounded up at the orders of Crown Prince Mohammed bin Salman during a drive to consolidate his power. Many detainees have been subjected to torture and physical abuse, according to friends, family members and rights groups.

Mr. Trump has taken pride in fighting for the release of American citizens detained abroad, most recently imposing trade sanctions on Turkey in an effort to win the release of a pastor, Andrew Brunson. He has celebrated his success at securing the release of a dual citizen, Aya Hijazi, who had been held in Egypt, and of three American detainees in North Korea.

But in his statements about Saudi Arabia this week, Mr. Trump again made clear that he puts concerns about human rights abroad second to other American interests, including Saudi military contracts and oil prices.

Andrew Miller, deputy director for policy at the Project on Middle East Democracy and a former State Department official in the region, argued that the administration’s apparent lack of concern for Dr. Fitaihi “confirms what we all expected: Trump is willing to sell or forsake any person, regardless of whether they are an American resident or an American citizen, in the furtherance of narrow economic interests.”

A State Department official who declined to speak for attribution said: “We routinely request consular access to all American citizens that have been detained in Saudi Arabia. In cases where the detainee possesses both Saudi and United States citizenship, the host government often does not recognize United States citizenship and denies consular access.” 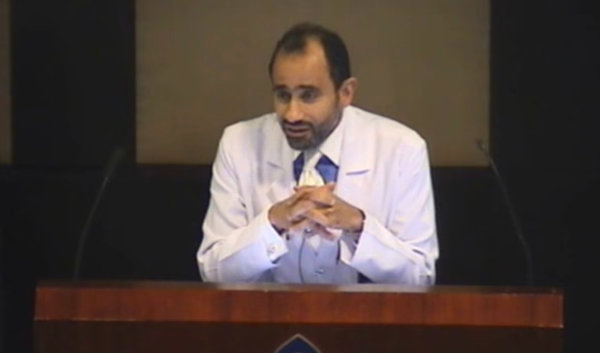 An official of the Saudi Embassy in Washington did not respond to a request for comment.

Born in Saudi Arabia, Dr. Fitaihi obtained American citizenship while studying and practicing medicine in the United States more than a decade ago.

After earning undergraduate and medical degrees at George Washington, Dr. Fitaihi completed a master’s in public health at Harvard and a residency in endocrinology at Harvard-affiliated hospitals. Massachusetts state records show that he was registered to vote while living at an address in Cambridge. He moved back to Saudi Arabia around 2006.

He was taken from his home in Jeddah in the middle of the night last fall as about 200 wealthy Saudis were swept up and detained inside a Ritz-Carlton hotel in Riyadh, in what the crown prince billed as a crackdown of corruption.

At least 17 other people arrested with Dr. Fitaihi were hospitalized, and at least one died as a result of abuse in detention.

Most detainees have now been released, often after signing agreements pledging large payments in exchange for their freedom. Many remain barred from leaving the kingdom and are required to wear ankle bracelets tracking their movements.

But Dr. Fitaihi is among dozens who were transferred to prisons for longer-term incarceration, even though they have not formally been charged with any crimes.

His family only reluctantly sought the assistance of the United States Embassy, after initially seeking to secure his release quietly for fear of incurring further punishment, his friends said.

Nihad Awad, the national executive director of the Council on American-Islamic Relations and a friend of Dr. Fitaihi’s since his years in the United States, said mutual friends described the family as terrified. “Several family are banned from travel, their accounts were frozen, and they did not want to go public because they knew the backlash would be severe,” Mr. Awad said.

Female detainees appear to have suffered special abuse, according to two people familiar with several cases and reports this week from two rights groups, Human Rights Watch and Amnesty International. Two people familiar with the cases said this week that some women’s rights activists had been subjected to electrical shocks, whipping and verbal and sexual harassment.

A Saudi official who spoke only on the condition of anonymity said the kingdom “does not condone, promote or allow the use of torture,” whether “physical, sexual or psychological.”

The activists had risen to prominence for calling for the end of Saudi Arabia’s longstanding ban on women driving. Prince Mohammed lifted the ban this summer, but his government also arrested many of those who had called for the change, evidently to prevent them from taking credit or demanding more.

The Saudi government has not identified the detainees, saying only that a number were under investigation for vague charges of conspiring with hostile forces against the kingdom. ”

In interviews with The New York Times, two people familiar with the activists’ cases said some had arrived at meetings with their families trembling or with red marks on their faces, necks and limbs. Some had been deprived of sleep, the people said, speaking on the condition of anonymity for fear of retribution.

Dr. Fitaihi had no such record of political activism inside the kingdom.

He was the son and grandson of prominent jewelers, a member of one of the wealthiest families in the western region of Saudi Arabia, the Hijaz, home of Islam’s holiest sites.

While living in Cambridge in the late 1990s and early 2000s, he was an active member of the Islamic Society of Boston, sometimes leading prayers there and eventually sitting on its board. He and his father became major donors to the society. Others included the wife of Prince Bandar bin Sultan, who was then the Saudi ambassador to Washington.

After the terrorist attacks of Sept. 11, 2001, Dr. Fitaihi, then teaching at Harvard, responded as an American. “There are Muslims who died, Christians who died, Jews who died — it’s a crime against humanity,” he told The Denver Post. “It’s a test for us as a nation.”

A few years later, in 2004, he was the center of controversy over anti-Semitic sentiments in columns he wrote for Arabic newspapers. He is reported to have called Jews “perpetrators of the worst of evils” and to have said they control “the power of the media.” The Islamic Society publicly disavowed his statements.

When he returned to Saudi Arabia, Dr. Fitaihi founded a private hospital, the International Medical Center. King Abdullah attended the opening and they had their picture taken together.

Building on the success of his hospital, Dr. Fitaihi took on other roles as a motivational speaker and television host. He eventually attracted as many as two million followers on social media.

In his speeches, he discussed the teachings of Islam but around themes of personal health, self-help and self-development that would be familiar to Christian or secular audiences.

“God gave you a gift,” one typical speech went. “First discover the thing that you are good at. There are so many multiple intelligences.”

Dr. Fitaihi’s private hospital does not appear to have derived income from the Saudi government, and the kingdom has not disclosed any allegations of corruption that might involve him. The Saudi authorities, in fact, have neither confirmed his detention nor announced any charges against him.

Dr. Fataihi was initially arrested in September 2017 but released under a travel ban. Then he was arrested again in November, in the sweep portrayed as a crackdown on corruption. He was transferred from the Ritz-Carlton to the Hair Prison outside the Saudi capital of Riyadh, where the kingdom jails criminals and convicted jihadists, friends said.

Mr. Khashoggi, another friend, once spoke out about the arrest.

“What has happened to us?” Mr. Khashoggi said on Twitter, not long after fleeing Saudi Arabia for Washington. “How can someone like Dr. Walid Fitaihi be arrested and what are the justifications for it?”

“Everyone is in a state of confusion and helplessness, there is no one you can go to,” Mr. Khashoggi said. “God help us.”