JERUSALEM — The annual Israel Prize ceremony is supposed to be an august and unifying event, a beloved highlight of the Independence Day celebrations that fall on Thursday this year.

This being Israel, it is rarely without controversy.

The latest ruckus goes to the heart of the political divides and culture wars rocking the country’s liberal democratic foundations even as it remains lodged in a two-year leadership crisis.

The prize is the state’s most prestigious honor, traditionally awarded to 10 or more citizens or organizations for outstanding contributions to the sciences, culture and society.

The scandal began about a month ago, when Education Minister Yoav Gallant, whose ministry oversees the prize, refused to honor one winner, Oded Goldreich, a professor of mathematics and computer science at the Weizmann Institute of Science.

Mr. Gallant, from the conservative Likud party, asserts that Professor Goldreich supports the international, pro-Palestinian campaign to boycott Israel, even though the professor has said he is neutral on the issue — now a touchstone of the dominant right-wing camp’s test of loyalty and patriotism.

Over the years, the Supreme Court has fielded requests from outside critics to disqualify several laureates from across the political spectrum.

This year, unusually, the selection committee that chose Professor Goldreich itself turned to the Supreme Court to complain that Mr. Gallant had overstepped his authority: The education minister grants the prize but has no say over the committee’s choices. 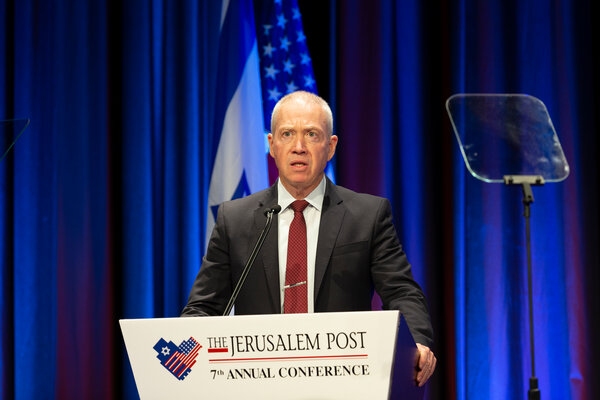 “Once again, we are required, in what has turned into a repetitive ritual, to engage in the Israel Prize,” the panel of three judges lamented in a ruling issued last week. “Indeed,” they added, “it is regrettable that such a prestigious and renowned award and such a unifying and uplifting event as the Israel Prize ceremony has turned into an almost constant source of disagreement and division.”

In the early 1990s, Yeshayahu Leibowitz, a polarizing professor who stridently opposed Israel’s occupation, was named a winner but withdrew himself after Prime Minister Yitzhak Rabin threatened to boycott the prize ceremony.

Last year, a contentious rabbi, Yaakov Ariel, received the prize over objections that he had described homosexuals as “disabled” and in need of treatment and had once opposed renting an apartment to two lesbians.

Drawing on previous rulings, the Supreme Court rejected a petition calling for the rabbi’s disqualification, saying that his past remarks were irrelevant and had no bearing on his professional excellence in his field of Torah scholarship, and that his comments were protected by free speech.

Professor Goldreich has a history of signing letters and petitions opposing Israel’s occupation of territories claimed by the Palestinians for a future state. Im Tirtzu, a nationalistic Israeli group that has branded him the “Anti-Israel Israeli Professor” campaigned against his nomination.

But to the dismay of Professor Goldreich’s supporters, the Supreme Court did not reject the selection committee’s petition outright. It granted the education minister a month to examine a recent discovery.

Professor Goldreich signed a petition this year urging the European Union to stick to its policy of not collaborating with research projects at Ariel University in the Israeli-occupied West Bank, as most of the world considers Jewish settlements in the West Bank to be a violation of international law.

The court agreed with the attorney general that the minister should be allowed to check if Professor Goldreich had fallen afoul of a contentious 2011 law that effectively bans any public call for a boycott against the state of Israel or its West Bank settlements. Yet the court acknowledged that Professor Goldreich said he did not support the anti-Israel boycott, divestment and sanctions movement known as B.D.S.

Michael Sfard, an Israeli human rights lawyer who represents Professor Goldreich, said that even if his client did support B.D.S., such support should not disqualify him from receiving the Israel Prize.

“Now, to prove that someone called for a boycott, you need to scrutinize his writings and signatures, driving us straight toward a McCarthyist process,” Mr. Sfard said, referring to the 1940s and 1950s in the United States, when leftists were regularly accused of subversion and treason. “This is an attempt to exclude a whole political camp in Israel.”

Professor Goldreich missed this year’s ceremony, which was recorded on Sunday for broadcast on Thursday. The judges said that should he be approved, he could receive the award at next year’s ceremony, if not before.

“Prof. Goldreich may be a brilliant scientist, but his support for the boycott movement and his call to boycott Ariel University is a spit in the face of the state of Israel and of Israeli academia and is possibly even a violation of the law,” he wrote on Twitter. He added that he would use the time to investigate whether the professor’s “current renunciation” of the boycott movement was genuine.

“I view this (unlawful) behavior of the minister as a small step in the process of pushing the left in Israel outside the limits of legitimacy, a process that has been going on for decades now and has been intensified in the last years,” Professor Goldreich said in an emailed comment. “I am happy to play a role in the struggle to block this delegitimization process and the attempt to reverse it.”

The professor’s colleagues and supporters held an alternative award ceremony for him at Weizmann Institute this week, where he referred to the award as the “Likud Prize.”

“I think that the Likud and the state of Israel are two different things,” he said.

The Weizmann Institute took out ads in the Hebrew newspapers on Wednesday congratulating Professor Goldreich and saying that, as far as they were concerned, he had won the prize.

The debate, meanwhile, has served only to underscore the deep divisions in the country.

“It’s delusional that people think they can break the basic rule that we don’t boycott each other and then get a prize from the state,” Orit Strock, a far-right lawmaker and settler, told Israel’s public radio.

Joseph Cedar, an Israeli writer and film director whose father won the Israel Prize in 1999, made a satirical movie, “Footnote,” revolving around a mix-up over the prize recipient and the academic rivalry between a father and son.

He said that, like every controversy, the prize exposed a truism that most of us tend to ignore.

“It’s a transaction,” he said. By offering the award to independent thinkers, the government has in the past had an opportunity to bring people outside the political consensus into the fold.

In this instance, however, “Goldreich got all the prestige while the establishment got nothing.”