KARBALA, Iraq — One night in May, Samira Abbas Kadhim was up late, waiting for her son. She poked her head out of the gate of their small house, looking for him down the narrow street.

Five minutes later, as she was in the kitchen, he was shot dead half a block away.

Her son, Ehab al-Wazni, was one of dozens of antigovernment protest leaders believed to have been killed by militia fighters and security forces since the demonstrations escalated two years ago. But his killing stands out as a particularly brazen attack that has rattled his home city, Karbala, the site of some of the holiest sites in Shiite Islam and once considered one of the safest cities in Iraq.

Karbala, the southern Iraqi city whose gold-domed shrines attract Shiite pilgrims from around the world, has become a flash point in Iraq’s internal conflict over the presence of dozens of powerful Iranian-backed militias. Instead of being known mostly as a place for quiet prayer and study, it has become a cauldron of competing armed groups and political interests. 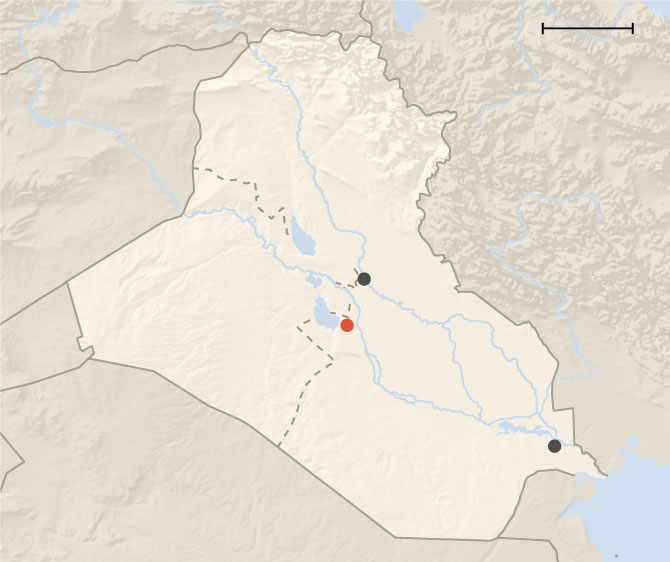 The most powerful militias, technically under the authority of the Iraqi government, are a force unto themselves, attacking enemies including rival militias, American military posts and the antigovernment protesters.

The protesters, who have demanded jobs and an end to corruption, have also called for an end to Iranian influence, which they blame for many of Iraq’s problems. Iran is taking a stand in Karbala, apparently fearing that if it loses influence there, other cities in Iraq’s Shiite heartland will follow.

The militias, helped by ineffective police and largely futile government efforts to bring the killers of activists to justice, seem to be winning. Nearly every major militia has a presence in Karbala. The protest movement there has largely gone underground, battered by threats, arrests and killings of its leaders, like Mr. al-Wazni.

“Ehab always said to people: ‘You are Iraqi. Why are you loyal to Iran?’” said Ms. Kadhim, seated in the straight-backed ornate wooden chair in which she has greeted a stream of senior Iraqi and other officials who are still paying condolences.

Next to her was a portrait of her dead son. It is the same image spray-painted above protest slogans on concrete walls from Baghdad to Basra, where he has become a symbol of the impunity with which activists are being killed.

Ms. Kadhim, 71, is outspoken about who she believes was behind the killing of her son: Qasim Muslih, the commander of an Iranian-backed militia.

“He sent his gang to kill him,” she said.

Comments like that have made her, too, a potential target.

“We get threats that say, ‘We want to kill the mother and her sons,’” she said.

In her small living room where a television might typically stand sits a monitor with a security feed of four locations — one of them the street corner a few doors down, where her son was shot.

The police officers lounging against a police vehicle on the corner are ostensibly there to protect her. But the police did not protect her son when he reported death threats. Or after his friend and follow activist Fahem al-Tai was shot dead while the two were riding on a motorcycle together last December.

A friend, Ridha Hasan Hajwel, is now in hiding after testifying in a Baghdad investigative court that Qasim Muslih and his brother Ali had threatened to kill Mr. al-Wazni.

Mr. Muslih, a Karbala native, is the leader of Al Tafuf Brigade, an Iran-backed militia in Anbar Province in western Iraq. The Muslih and al-Wazni families lived in the same Karbala neighborhood for years.

His arrest in May set off an armed showdown with the paramilitary groups.

The prime minister, who had taken office in 2019 promising to bring the militias to heel, agreed to hand Mr. Muslih over to the paramilitary command, which released him after a judge said there was insufficient evidence to charge him. An arrest warrant was also issued for Ali Muslih. (The two brothers declined to be interviewed for this article.)

Mr. Muslih lived in Iran for almost a decade. After the killing of Mr. al-Wazni, demonstrators burned barricades around the Iranian consulate in Karbala in protest.

In normal times, at least one million Shiite pilgrims a week come to Karbala to visit the shrines of Imam Hussein and Imam Abbas, who are at the heart of Shiite identity. Most of the visitors are from Iran.

Even during the pandemic, the shrines, with their marble courtyards and dazzling mirror mosaics topping Iranian ceramic tiles, are packed with pilgrims. On sweltering summer days, fans with water reservoirs spray the tourists with a fine mist as they shop for religious keepsakes made from Karbala’s clay.

Imam Hussein, a grandson of the Prophet Muhammad, was killed in battle in Karbala against Muslim rulers 1,300 years ago, a defining event of Shiite Islam that has resonated through the centuries.

“The whole idea of Karbala is it’s supposed to be this place where the grandson of the Prophet Muhammad stood vastly outnumbered because he opposed the state at the time, because he wanted people to choose their own leaders, because he wanted freedom,” said Sajad Jiyad, an Iraq-based fellow at the Century Foundation, a U.S.-based think tank.

That history gives the protests in Karbala a particular resonance.

But for now, the only sparks come from the gun barrels of assassins.

In August, Abeer Salim al-Khafaji, the city’s director of municipal services, was fatally shot in front of police officers and security cameras as he was inspecting illegal housing. The gunman was a Karbala man accused of having built illegally on public land.

On paper, the local police are responsible for security outside the shrines, but most Karbala residents acknowledge that the force is the weakest element in the security chain. Security forces include an array of paramilitary groups, including Kataib Hezbollah, an Iranian-backed militia that was accused of killing an American military contractor, and a paramilitary group loyal to Moktada al-Sadr, the populist Shiite cleric.

“There is an uneasy balance of power in my view,” Mr. Jiyad said.

So the killings continue. And Mr. al-Kadhimi’s promise of ending corruption and providing jobs seems like a distant dream.

Mr. al-Wazni’s brother, Ali al-Wazni, 42, has a degree in Arabic but works in a kebab shop. He said that to get a decent government job he would need to pay a bribe of up to $10,000.

“The state does not control the state,” he said. “There is no judiciary or law. There is nothing. There is chaos. We are a country controlled by mafia and gangs. This is the reality of the country.”