In 2017, an Iranian-American couple drew up a list of cities in the United States and Europe where they could settle now that both their daughters had left for college.

They had an attachment to the language, culture and traditions of a homeland they had both left as children. They had traveled to Iran several times over the years and felt a welcoming vibe.

Mr. Shargi, 56, was a partner at a company in Abu Dhabi leasing and selling private airplanes. Ms. Amidi Shargi, 53, a poet, gave public lectures at universities and hospitals — including a TEDx talk about the therapeutic power of poetry.

Family members in America, particularly Mr. Shargi’s father, warned them against the move, saying the Islamic Republic was “no place for them.” They dismissed the concerns as exaggeration because neither had ever been involved in politics.

That decision upended their lives. Mr. Shargi is the latest dual American citizen arrested in Iran. He was sentenced on Nov. 30 to 10 years in prison on murky charges of national security violations, after a trial that he not only did not attend but had no idea had been taking place. 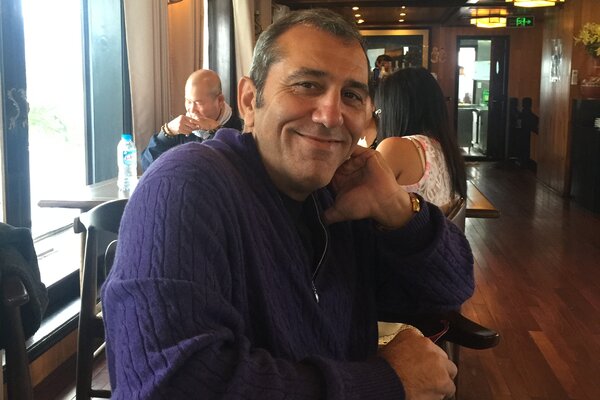 Ms. Amidi Shargi is now living in Washington navigating efforts aimed at securing her husband’s release and containing the growing anxiety of their children and elderly parents. Ms. Amidi Shargi spoke out publicly in an interview for the first time, about their ordeal.

“Iran felt like we were at home. We traveled all around, took in all the history,” Ms. Amidi Shargi said. “We did not think this would happen to him. Not in a million years, not a drop in the sea.”

Mr. Shargi’s conviction came against the backdrop of other provocative steps Iran has taken since the election of President Biden to pressure the new administration into reversing the “maximum pressure” policy of the former president, Donald J. Trump. Mr. Trump scrapped U.S. participation in the 2015 nuclear agreement and reimposed severe economic sanctions.

At least three other American citizens of Iranian descent have been held in Iran for years.

“In the past decade, Iran has frequently pursued its foreign policy goals through detention and hostage taking of dual nationals. This latest imprisonment of Emad Shargi is consistent with this track record,” said Hadi Ghaemi, the director of the Center for Human Rights in Iran, a New York-based advocacy group.

As the Biden administration attempts to define how to deal with Iran, which could include a return to the nuclear deal, families of the imprisoned Americans are calling for the administration to prioritize returning their loved ones in any negotiations.

Besides Mr. Shargi, those held include Baqer Namazi, a former Unicef official, his son Siamak Namazi, a businessman, and Morad Tahbaz, an environmentalist entrepreneur.

Mr. Trump’s administration engaged with Iran in prisoner swap deals that won the release of two American citizens held by the Iranians — Xiyue Wang, a Princeton graduate student, and Michael R. White, a Navy veteran. The other imprisoned Americans are officially regarded by Iran as Iranian citizens, despite their United States passports.

Secretary of State Antony J. Blinken announced on Monday that the United States would join 58 countries in an initiative aimed at creating a universal approach to confront state sponsored hostage taking and arbitrary detentions.

“We will work with our allies, many of which also have nationals currently detained by the Iranian government, to seek their release and to stand up to Iran’s disgraceful practice of using unjust detentions of foreign nationals as a political tool,” the State Department said through a spokesperson.

When speaking of her husband, Ms. Amidi Shargi recited one of her poems about an angel with broken wings who after a long period of sitting still discovers that resilience can help him fly again.

“That angel is Emad. He is by far the kindest gentlest partner, the most present father. He is sitting still in a jail cell without his wings,” said Ms. Amidi Shargi breaking into tears.

Trouble with Iran’s security apparatus started about a year after the couple moved to Tehran, she recalled. By then, Mr. Shargi was working as an international vice president of Sarava, a high-profile Iranian venture capital fund with 30 companies in its portfolio and $200 million in foreign investments.

Security forces raided their house, confiscated their passports, electronic equipment and family albums and arrested Mr. Shargi. He was detained for eight months at the 2-Alef ward of the Revolutionary Guard’s intelligence unit inside Tehran’s Evin Prison and interrogated about his business ties and travels.

Ms. Amidi Shargi was also interrogated several times, she said, and was threatened repeatedly with reprisals if she informed the American authorities or spoke with the media about her husband’s case.

Mr. Shargi was released on bail after eight months in December 2018.

In December 2019, the Revolutionary Court issued an order informing Mr. Shargi that he has been cleared of all spying and national security charges, according to a copy of the order the family’s lawyer shared with The New York Times.

“We thought our silence had paid off and it was over, and we could leave,” said Ms. Amidi Shargi. But it was not that simple.

Two mysterious events worried them: A false Iranian news report that they had been arrested, and the inexplicable refusal of the authorities to return Mr. Shargi’s passport.

They both agreed she should fly back to the United States to rejoin their children.

Throughout 2020 he was called before the Revolutionary Court for three hearings. On Nov. 30 the court summoned Mr. Shargi and the judge told him he had been tried in absentia and sentenced to 10 years in prison and was presented with a 35-page document convicting him of espionage. His lawyer filed an appeal.

Unbeknown to his family or lawyer, Mr. Shargi decided to flee through the border with Iraqi Kurdistan where smugglers have designated routes for trafficking people and goods across the border.

Ms. Amidi Shargi spoke to her husband on Dec. 4, she said, and then he did not return her calls or see her frantic texts. She asked acquaintances in Tehran to search for him in their house, at hospitals and the police station.

The Iranian authorities offered no information of his whereabouts and the family had no news of him for more than a month.

On Jan. 17, a website affiliated with the Revolutionary Guards reported he had been arrested at a checkpoint in the province of Western Azerbaijan about 12 miles from the Iraq border.

“It was devastating, we all found out through the news and we were calling each other trying to get information,” said Ms. Amidi Shargi.

A spokesman for Iran’s Judiciary, Gholamhossein Esmaeili, confirmed the arrest at a news conference in late January without identifying Mr. Shargi by name. Mr. Esmaeili’s account also differed inexplicably from the Revolutionary Court order that had exonerated Mr. Shargi in December 2019. The spokesman said Mr. Shargi had been out on bail and had an “ongoing case against him” on espionage and other charges.

Iran’s mission to the United Nations did not respond to an inquiry about Mr. Shargi’s case.

Mr. Shargi called his wife last Saturday for the first time since he disappeared. In what she described as his trademark soft-spoken voice, he apologized for not having been in touch sooner.

“I got the girls on the speaker. We said ‘we love you, we miss you, we are praying for you to come back home,’ ” said Ms. Amidi Shargi. He couldn’t talk long or disclose much, she said, except that he was being held at the same place as before, meaning Evin Prison.