Court rejects appeal to release pro-Kurdish politician despite a recent ruling by the European rights court. 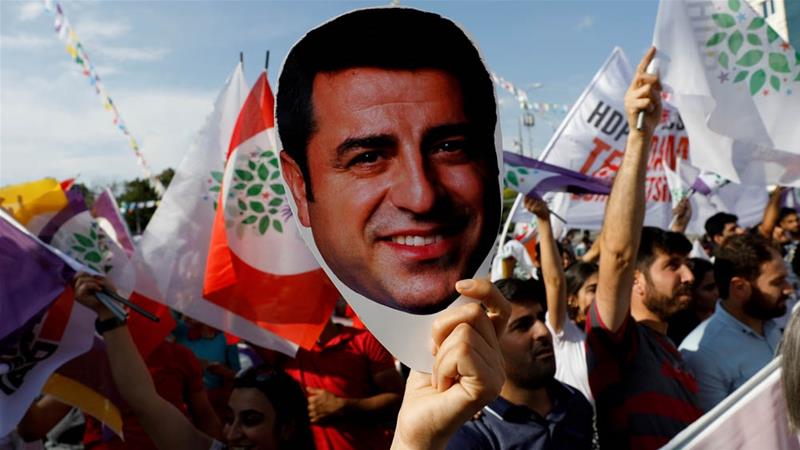 A Turkish court has rejected an appeal to release a former leader of Turkey’s pro-Kurdish opposition from pre-trial detention, despite a ruling by the European Court of Human Rights (ECHR).

The court on Friday turned down the release application of Selahattin Demirtas who was detained two years ago on “terrorism-related” charges, which he denies.

Demirtas, 45, is a former co-chairman of the pro-Kurdish Peoples’ Democratic Party (HDP).

Last week, the ECHR had urged Turkey to swiftly process Demirtas’s legal case, saying his pre-trial detention had gone on longer than could be justified.

Although the ECHR accepted that Demirtas, who has been in jail since November 2016, was arrested on “reasonable suspicion” of having committed a criminal offence, it said Turkish authorities extended the politician’s imprisonment on grounds that could not be regarded as “sufficient” to justify its duration.

In its ruling on Friday, the Turkish court said the ECHR decision had not been finalised and unanimously rejected the appeal for Demirtas’s release.

Benan Molu, one of Demirtas’s lawyers, said the Turkish court ruling was unfounded.

“The ECHR’s ‘immediate release’ ruling does not need to be finalised for it to be implemented. Every second he [Demirtas] is held in prison despite the ECHR ruling, there is a crime being committed,” Molu said on Twitter.

Hours after the ECHR ruling on November 20, Demirtas’s lawyer had applied for his release, saying keeping the politician in jail would amount to a “restriction on freedom”.

Demirtas later released a short statement, saying, “My position as a political hostage has been legally confirmed.”

Demirtas and several other former HDP members of parliament have been in jail for having links to the outlawed Kurdistan Workers’ Party (PKK), which has been fighting the Turkish army for more autonomy since the 1980s.

Demirtas was arrested after his immunity as a member of parliament was lifted in 2016. He was sentenced to four years in prison for “terror propaganda” in support of outlawed Kurdish rebels.

The former HDP co-leader was his party’s presidential candidate in elections earlier this year. He also campaigned against the constitutional changes in 2017 from the prison through social media.

Turkey is one of the 47 signatories of the European Convention on Human Rights that established the ECHR, which makes legally binding verdicts on the cases related to the signatories in question.

But there have been many instances in which Turkey has not implemented ECHR rulings.